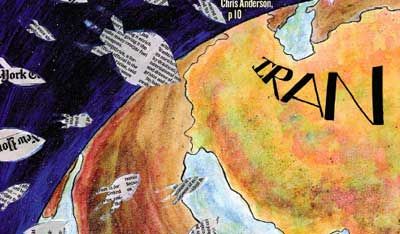 All art by Frank Reynoso

Whatever its end goal, the Bush administration is utilizing the same tactics, accusations and propaganda in preparing the American public for a possible attack on Iran as it did during the lead-up to the bombardment, invasion and occupation of Iraq in 2002-2003. Whether these tactics will succeed a second time, of course, remains an open question. Also an open question is whether the “paper of record,” The New York Times, will have learned any lessons from its own disastrous pre-war coverage.

There are eerie parallels between the administration’s media strategy in pushing confrontation with Iran – relying on a series of anonymous leaks to administrationfriendly reporters and off-the-record background briefings – and the behavior of the press in the days during the run up to the Iraq war, who displayed an unfailing willingness to vaunt unproven and hawkish claims. To look at the news cycle in early February, it must have seemed that Mahmoud Ahmadinejad himself was caught ferrying Iranian-manufactured weapons to Iraqi militants. Newspapers across the country ran various incarnations of the story the White House wanted told, namely that Iran was supplying Iraq with the “deadliest bombs,” as read a headline from last week’s Times.

Most of these stories were based on a single Baghdad press conference, given on Sunday, Feb. 11, by three “anonymous” Pentagon officials. The presentation was delayed several times and was supposed to provide a much-hyped “Iran dossier,” charging that “Iranian security forces, taking orders from the ‘highest levels’ of the Iranian government, are funneling sophisticated explosives to extremist groups in Iraq, and the weapons have grown increasingly deadly for U.S.-led troops over the past two years.”

In order to attend the briefing, journalists had to surrender cell phones, tape recorders and cameras. Instead of the voluminous evidence promised beforehand, journalists were offered a PowerPoint presentation given by the three “anonymous” senior defense officials, along with some examples of a weapon they said Iran was supplying Iraq. Despite scant evidence and the admission by an anonymous official at the press conference that there was no smoking gun linking Iran to Iraqi weapons, the Times ran the story on page one the following day, in a story by James Glanz entitled, “U.S. Presents Evidence of Iranian Weapons in Iraq.”

Even before this Baghdad press conference – surely one of the strangest in recent journalistic history – alarms were sounding over another front-page Times story, “Deadliest Bomb in Iraq Made By Iran, U.S. Says,” by national security correspondent Michael Gordon. Journalist and author Glen Greenwald summed up the Feb. 10 Times piece this way: “The article does nothing, literally, but mindlessly recite administration claims about Iran’s weapons-supplying activities without the slightest questioning, investigation, or presentation of ample counter-evidence.” Editor and Publisher, meanwhile, dryly noted that “Gordon wrote with [Judith] Miller the paper’s most widely criticized –even by the Times itself – WMD story of all, the Sept. 8, 2002, ‘aluminum tubes’ story that proved so influential, especially since the administration trumpeted it on TV talk shows.”

Raw Story, meanwhile, speculated that the Gordon story “appeared to violate sources,” as it contained no explanation why its sources were granted anonymity. While the Times’ has a unique role in setting the news agenda, it has not been alone in its shoddy reporting. On Jan. 29, CBS Evening News led off a report about Iran’s alleged support for Shiite militias in Iraq by claiming that “the U.S. military says it has proof positive” of Iranian involvement in Iraq. According to Fairness and Accuracy in Reporting (FAIR), both NBC and ABC News aired equally credulous Iraq-Iran coverage. “The most important lesson about the Iraq War for reporters was perhaps the simplest one,” FAIR noted. “Don’t assume the White House is telling the truth.”

It’s a lesson that many reporters seem to be forgetting now that U.S. officials are escalating their claims about Iran’s role in Iraq.” Many of the U.S. government’s claims against Iran appear to be far-fetched, if not outright disinformation. Iraq analyst Juan Cole contends that this concerted attempt “to blame these U.S. deaths on Iran is in my view a black psy-ops operation. The most fractious Shi’ites in Iraq [i.e., members of the al-Sadr-aligned Mahdi Army] are the ones who hate Iran the most,” Cole concludes.

Extensive information also exists that for the last year and a half, Sunni insurgents have been using so-called “shaped charges,” of the type purportedly being smuggled into Iraq by Iran. “If 25 percent of U.S. troops are being killed and wounded by explosively formed projectiles (EFRPs),” notes Cole, “then someone should look into who is giving those EFPs to Sunni Arab guerrillas. It isn’t Iran.”

Even if Iran and the United States somehow were to reach a political settlement, that wouldn’t stop the primary cause of U.S. troop deaths in Iraq: overwhelming Iraqi opposition to the U.S. military presence in the country. A September 2006 World Public Opinion poll found that more than two-thirds of all Iraqis, including 71 percent of the Shia and more than 90 percent of the Sunnis wanted U.S. forces to withdraw in a year. And more than 60 percent of all Iraqis supported attacks on coalition troops. “If Iran did not exist, U.S. troops would still be being blown up in large numbers,” says Cole. “Sunni guerrillas in al-Anbar and West Baghdad are responsible for most of [their] deaths.”

To be fair, many mainstream media outfits seem aware of their own shoddy reportorial past and appear at least partially conscious of the fact that they are being played. But the U.S. press – reliant as it is on outdated notions of objectivity and official sources to “tell it the news” – is poorly placed to call proven liars liars. Disgraced ex-Times reporter Judith Miller spoke for many journalists when she told a Berkeley audience in 2005 that, with regard to sources, “You go with what you’ve got.” Or, as University of Texas journalism professor Robert Jensen put it in ZNet, “The way in which contemporary mainstream journalists gather facts about the world privileges those things that can be documented, especially from ‘credible’ and ‘authoritative’ sources.”

The parroting, in fact, continues. On Feb. 14, President Bush told a packed news conference the Iranian government had directed improvised explosive devices (IEDs) to Shi’ite insurgents in Iraq, contributing directly to the deaths of U.S. troops. “I can say with certainty that the Quds Force, a part of the Iranian government, has provided these sophisticated IEDs that have harmed our troops,” Bush said. Once again, The New York Times ran a front-page article on the conference. The headline? “Bush Declares Iran’s Arms Role in Iraq Is Certain.”

From non-existent weapons of mass destruction, to the beginnings of the insurgency to the founding of Iraq’s nominal government, the Times and the rest of the mass media have found themselves playing catch-up as reality frequently diverges from official spin. Here are a few of the Times reporters who have helped make the Times’s Iraq coverage what it is:

Former tennis partner of George Bush Sr. and the Times’ longtime Baghdad bureau chief, Burns will be leaving Iraq in the summer of 2007 to serve as London bureau chief. In an interview with Charlie Rose of PBS in February 2007, Burns blithely moved from conversations about his own curly hair to the grim fact that nearly every barber in Baghdad was dead, the victims of unrelenting sectarian violence.

In answering the question, ‘Was the Iraq war lost?’ Burns recently told CSPAN, “I think the honest answer is that we – that we don’t know, that the situation is extremely complicated, that it looks pretty dire, but all hope is not exhausted.”

Almost single-handedly personifies what is wrong with modern U.S. journalism. After breathlessly hyping allegations that Iraq possessed WMDs (the rationale for the 2003 invasion) Miller embedded herself with the WMD search team “Met Alpha,” where she did her best to convince both herself and Times readers that unconventional weapons had been found. At one point, Miller interviewed an anonymous Iraqi scientist in a red baseball cap who “pointed at” a place in the sand where he claimed chemical weapons had been buried. In May 2004, the Times would publish a mea culpa in which it retracted four of Miller’s major pre-war “scoops.” Deeply implicated in the CIA leak case, Miller also spent an 85-day stint in jail in 2005 shielding the identity of vice-presidential staffer Lewis “Scooter” Libby, a close friend, from a special federal prosecutor.

After voters threw the Republicans out of power in Congress in November, the Times’ longtime military correspondent Michael Gordon responded with a barrage of front-page stories – “Get Out Now?

Not So Fast, Some Experts Say” (11/14/06), “General Warns of Risks in Iraq if GIs Are Cut” (11/15/06), “Will it Work on the Battlefield?” (12/07/06) – that helped shift the debate about the future conduct of the war from withdrawal to “surge.” Gordon and co-author Lt. General Bernard E. Trainor wrote Cobra II: The Inside Story of the Invasion and Occupation of Iraq. Gordon is also the author, along with Judith Miller, of the infamous Sept. 8, 2002 article on Iraq’s aluminum centrifuges, an article that was later cited back to the press by members of the Bush administration as “proof” of Iraqi WMDs.

The executive editor of The New York Times, who, as a columnist in 2003, supported the invasion of Iraq and called himself a member of the “I Can’t Believe I’m a Hawk Club.” Two days after the war began, Keller called upon Secretary of State Colin Powell to resign because of the general’s support for continued U.N. diplomacy. Keller favorably referred to then-Deputy Secretary of Defense Paul Wolfowitz as the “Sunshine Warrior.” Five months later, Keller assumed the executive editor’s position in the aftermath of the chaos surrounding the Jayson Blair plagiarism scandal. Keller later faced a Blair-esque crisis of his own with disgraced reporter Judith Miller. Keller stood behind Miller for months in her battle with CIA leak prosecutor Patrick Fitzgerald before abruptly engineering her resignation (and handsome severance package) in October 2005.

New York Times, Then and Now
More than a decade after Saddam Hussein agreed to give up weapons of mass destruction, Iraq has stepped up its quest for nuclear weapons and has embarked on a worldwide hunt for materials to make an atomic bomb, Bush administration officials said today. In the last 14 months, Iraq has sought to buy thousands of specially designed aluminum tubes, which American officials believe were intended as components of centrifuges to enrich uranium.
— “THREATS AND RESPONSES:
THE IRAQIS; U.S. SAYS HUSSEIN INTENSIFIES, QUEST FOR A-BOMB PARTS” Sept. 8, 2002, Michael R. Gordon and Judith Miller

In interviews, civilian and military officials from a broad range of government agencies provided specific details to support what until now has been a more generally worded claim, in a new National Intelligence Estimate, that Iran is providing “lethal support” to Shiite militants in Iraq.
—“DEADLIEST BOMB IN IRAQ IS MADE BY IRAN, U.S. SAYS” Feb. 10, 2007, Michael R. Gordon

After weeks of internal debate, senior United States military officials on Sunday literally put on the table their first public evidence of the contentious assertion that Iran supplies Shiite extremist groups in Iraq with some of the most lethal weapons in the war. They said those weapons had been used to kill more than 170 Americans in the past three years.
— “U.S. SAYS ARMS LINK IRANIANS TO IRAQI SHIITES” James Glanz