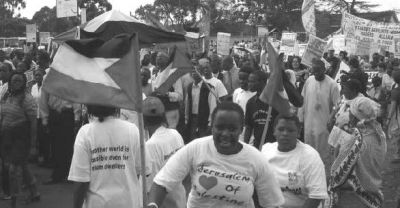 Participants march in this year’s World Social Forum in Nairobi, Kenya. Started in 2001, the forum brings together tens of thousands of activists from around the world every year to network and learn from each other’s struggles. Photo: Kenya.Indymedia.Org

From Jan. 13-26, tens of thousands of participants, representing nearly every nation and people, gathered to strategize, debate and struggle for solutions to worldwide problems of injustice and inequality at the Annual World Social Forum.

Taking place this year in Nairobi, Kenya, the conference was situated in a massive sports complex neighboring the slum of Korogocho, where tens of thousands of Kenyans live in abject poverty, a contrast to the wealth of many of the conference participants from the so-called “developed world.”

As with many Nairobi slums, Korogocho began when squatters built shacks on empty government land. Most of these original squatters later rented these small structures out to families who pay up to $10 per month to live in a space with no running water, stolen electricity and the constant threat of government eviction. Nairobi has at least 200 slums, where almost half of its population lives, according to local activists.

During a visit to a small school on the edge of the slum, teachers told me of the conditions under which they work. We talked in one of ten cramped classrooms, less than 10×10 feet, with almost nothing in the way of desks or other basic supplies. These ten rooms and 15 teachers serve 450 children. A hubcap hanging from the wall acts as a school bell. Several of the basic stone rooms have no ceiling. Many of the students are orphans whose parents have died from AIDS. Sewage runs in a river just past the school.

The teachers described concerns around security, as drug addicted armed youth roam through the neighborhood. “We have to shift our hours according to the threat,” Paul, one of the teachers, told me. The police do not enter the camp, which may be for the best, as Kenyan police inspire more fear than the gangs.

“If you see the police coming, you turn the other way as quickly as you can,” Cynthia, a young volunteer with Youth Initiatives Kenya (YIKE), told me. “If they catch you, they will ask for a bribe, and if you can’t pay them, they will lock you up. If you are arrested, you have no rights.” This month, 60 civilians have been killed by the police. There are no investigations into police killings.

Humphrey Otieno, of the Nairobi People’s Settlements Network, another grassroots group active in the slums, also complained of police harassment. “In talking about rights issues, especially with this administration, you can be caught, detained…four of our group are in prison, charged with no proof,” said Otieno. These activists have been held for six months so far, according to Otieno.

Nairobi is a city of contrasts, where those who can afford it live in gated communities, shop at gated stores, and eat at gated restaurants, never seeing the approximately 1.5 million slum dwellers living nearby. Paul, the schoolteacher, told me, “Some people in Nairobi, if you mention to them Korogocho, they will say, ‘Korogocho, is that in Kenya?’”

This year’s Forum happened behind gates and walls and was guarded by heavily armed Kenyan police, a source of much tension at the conference.

Initiated in Brazil in 2001, as a counterpoint to events such as the World Economic Forum in Davos, Switzerland, where the rich and powerful gather to make decisions that affect the poor, the World Social Forum was envisioned as an annual gathering of grassroots movements from around the world. Organizers describe it as “an open meeting place for reflective thinking, democratic debate of ideas… and inter-linking for effective action.”

Among the hundreds of topics presented at the five-day conference were discussions among African youths about democracy and movement building, several presentations on New Orleans and the Gulf Coast sponsored by the People’s Hurricane Relief Fund, workshops on nonviolent strategy and tactics, panels of veterans from Third World liberation struggles, teach-ins on the Moroccan occupation of Western Sahara and a workshop called Open Government Through Mass Document Leaking. Africa, which has been underrepresented at past forums, was definitely visible in large numbers this year.

Throughout the week, participants marched and demonstrated on a range of issues, including a march against war in Somalia and a march of disabled Ugandan activists chanting, “You laugh because you think we are different, we laugh because we are the same.”

“These Forums are very important. It’s a time when people can meet from different parts of the world, we can network with other movements and build solidarity,” legendary Palestinian resistance figure Leila Khaled told me.

Khaled spoke at the Forum’s opening concert, calling for international sanctions against the Israeli state, the closure of Guantanamo prison and for an international struggle against oppression and colonialism.

Outspoken criticism of U.S. policy and imperialism continued throughout the weekend, as Kenyan Forum organizer Oduor Ongwen declared, “One American life should be no more valuable than one Iraqi life. One life of a corporate chief should be equal to the life of one slum dweller.”

Referring to the Ethiopian military presence in neighboring Somalia, Professor Edward Oyugi, another Social Forum organizer, declared, “The war next door is an American war by proxy.”

Among the demonstrations at the Forum were daily protests against the Forum itself, especially focused on the high costs of attending the Forum, placing attendance out of reach of most Kenyans.

Conference organizers replied that the Forum already has a sliding scale, where registrants from “Global North” countries such as the United States and Europe pay $110 while Kenyans pay about seven dollars. Organizers also claim that of the 46,000 people registered for the Forum in the first two days, 7,000 were free scholarships given to Kenyan grassroots organizations.

Despite these assurances, protesters remained dissatisfied, and a contingent of slum dwellers, joined by conference participants, marched through the gates and into the Forum.

At the Forum, everything is up for debate, including the rules of the Forum. As a Ugandan activist said at a Saturday panel called Memories of Resistance, “The question posed here is, do we, the people, want to be architects of our world, or just interior decorators?” The hope that a better, more just and democratic world can be constructed through these encounters is what lies beneath this gathering.

Jordan Flaherty is an editor of Left Turn Magazine – www.leftturn.org. He can be reached at neworleans@leftturn.org.