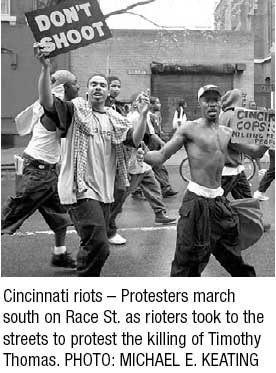 MARCH 2001—After being arrested protesting at George W. Bush’s first inauguration, Suzy Subways writes of her time in jail with a pair of women who are locked up for fighting back against their husbands:

“She and Peaches both said things they shouldn’t have said out loud in there, but they couldn’t help it. They were proud of fighting back. Their men had run away screaming from them. “I hope my man’s down there with yours. They’re probably talking about us. ‘Bitch went crazy with that knife!’ We laughed until it got late and people went to sleep. I didn’t hear anymore crying.”

APRIL 2001—Jenka Soderberg publishes excerpts of cell-phone interviews with residents of inner-city Cincinnati speaking from the streets as the National Guard entered their neighborhoods during riots over the police shooting of an unarmed Black teenager.

MAY 2001—Union organizer Stephanie Greenwood takes readers step-by-step through a grueling campaign to win union recognition for 300+ overworked, underpaid residents at St. Lukes-Roosevelt Hospital. “The process of organizing a union has only flashes of idealism and high-road inspiration …Each meeting, conversation, trip to a legislative member’s office or to a community board, each letter of support, each day another person wore a union button was another small piece of pressure brought to bear on a complicated, financially distraught institution…

For residents whose overriding problem was a lack of time and energy for out-of-work activity, the piecemeal nature of building a campaign required lots of faith and motivation to keep going. How will we get the union? Well, come to a meeting with Community Board 9 and ask for its support. Will that work? No, but it will help.”

SEPT. 13, 2001—While the most of the media howls for blood following the 9/11 attacks, A.K. Gupta writes, “We’ll be called on to rally around the flag and the president in the coming days, and support whatever retribution is carried out. Our security would be better enhanced by using this time of grief and mourning to reconsider our position in the world and use reason–not bombs–to solve our problems … What do we gain by attacking innocents, but the selfdestruction of our own freedoms?”

MARCH 2002—Less than three months after Argentina’s economic collapse, Ana Nogueira and Josh Breitbart report from inside a growing grassroots rebellion against capitalism and business-as-usual politics.

MARCH 2002—Six months after 9/11 and long before most people are paying attention, Mike Burke looks at an already growing body of evidence about the possible longterm impact on New Yorkers of the collapse of the Twin Towers. “Many experts,” he writes, “including dissident scientists within the Environmental Protection Agency (EPA), describe the event as an environmental disaster on a scale unlike any the city has ever seen.” NOV. 2002—Four months before the United States invades Iraq, The Indypendent publishes a special issue (“Why War? Why Now?”) that debunks official rationales for war, offers a first-hand glimpse into the life of ordinary Iraqis, and covers the nasceant antiwar movement that would soon bloom to historic proportions. A two-page centerspread highlighting the research and production of WMDs in the U.S. is later reproduced as a glossy 24’ by 36’ poster and thousands of copies are sold across the country.

APRIL 1, 2003—Eight days before the U.S. takes control of Baghdad and widespread looting begins, Kristen McLeod-Ball publishes a special feature on the dangers the war poses to Iraq’s vast archaeological and cultural heritage. 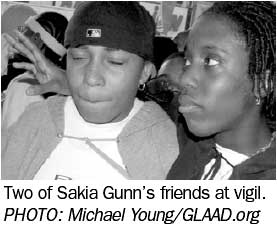 JULY 2003—Following the murder of Sakia Gunn, Jessica Stein writes a scathing editorial under the name “J.K. Jaffe” about the unwillingness of mainstream feminist and gay rights groups to speak out against Gunn’s killing: “There were a few hundred people at the vigil on the Christopher Street piers, mostly young and black like Gunn and her friends. Where were the women’s groups? Why was the Feminist Majority in such a minority? Had NOW decided to come later… This isn’t the sort of story the mainstream gay community tries to trumpet. Matthew Shephard, white, pretty and Midwestern, was a palatable symbol, but a black butch dyke might skew our P.R. in Dubuque. They might think we all look like that, and then they’ll never let us get married.”

JUNE 16, 2004—Bennett Baumer journeys inside a rigged longshoremen’s union election. “At the Holiday Inn,” he wrote, “no third party mediated the voting and locks did not appear on some boxes. I asked [Local 1235 President Al] Cernadas if the voting had ended. Referring to the union members, he said, ‘Oh no, they have until 6 p.m. to vote.’ Putting his arm around me, Cernadas steered me toward the other end of the room from the open ballot box.”

SUMMER 2004—While the corporate media pushes unsubstantiated scare stories all summer about protesters and terrorists besieging New York during the upcoming Republican National Convention, The Indy unabashedly trumpets the rights of protesters and reports on why they are going into the streets. Two August issues have print runs of 100,000-200,000, the largest print run in decades for a radical, grassroots paper.

DEC. 22, 2004—John Tarleton writes the story of ‘Invisible Soldier’ Herold Noel, a Brooklyn-born Iraq vet who finds himself fighting mental illness and sleeping outside in the dead of winter while his family falls apart around him. Noel’s story is subsequently picked up by Democracy Now!, CBS, CNN, The New York Post, Christian Science Monitor as well as a number of websites. (Said Noel, “I walk around crying every day. I feel lost in my own land; the land I fought for … Sometime I just feel like picking up a gun and calling it quits … But, something’s got to get better. I didn’t just risk my life for nothing. There’s a God out there–somewhere.”) A month later an anonymous donor puts up $18,500 to cover a year’s rent for a three-bedroom apartment in the Bronx for Noel, his wife and three kids.

APRIL 6, 2005—“In devising a strategy to defeat Iraq’s insurgents, the Pentagon may be gaining the upper hand at the cost of pushing Iraq toward civil war,” A.K. Gupta writes in a groundbreaking piece that first appears in The Indypendent. Later in the summer, Gupta writes an in-depth analysis detailing how the Iraq conflict had devolved into “civil war,” a term most of the U.S. media refused to use for almost another year-and-a-half.

MAY 11, 2005—Reporting from Putla, a small town in the impoverished southern Mexican state of Oaxaca, Leanne Tory-Murphy anticipates the political upheavals that would rock Mexico in 2006.

She wrote, “Social organizing and the inspiration of seeing their strength when they come together in manifestations in the capital have sparked hope and a sense of purpose. As our Mixteco translator explained, ‘we know, we believe and we trust that another form of organization will liberate us and this is what we work for. With our transparent democracy, we can go further than dreaming.’” 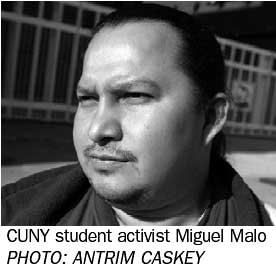 NOV. 9, 2005—The Indy looks at the struggle for justice in the CUNY system with a package of stories including a feature on the trials and tribulations of Hostos College activist Miguel Malo by Sarah Stuteville and Yvonne Liu’s firstperson piece about teaching sociology to mostly immigrant students at LaGuardia College. Liu writes, “The students loved Marx. They really understood, felt and lived Marx’s writing on alienation from your work, the process of working and the end product of your work. They almost had it down to a chant. ‘Why are people alienated?’ ‘Because they don’t own the means of production!’”

FEB. 9, 2006—In The Indy’s second annual Sex issue, 81-year-old Amanda Davis offers advice for how to find good lovin’ throughout one’s later years and reflects on her recent hookup with a new boyfriend. “I just spent ten days with someone I met purely by accident – wrong number from opposite ends of the country … We had very good sex but a wonderful part of it was holding hands watching an old movie, going to bed, holding one another, talking, learning one another’s past.”

MARCH 2, 2006—Photojournalist Andrew Stern spends a month living with residents of Cité Soleil, Haiti in the run-up to the country’s first elections since former President Jean-Bertrand Aristide was toppled in a 2004 U.S.-backed coup. Stern’s stunning two-page photo essay captures the spirit of Cité Soleil, a giant urban slum on the edge of Haiti’s capital city where repression by and resistance to foreign troops is a part of daily life.

MAY 10, 2006—Indypendent cofounder Heather Haddon returns for an issue to write an expose (“Eviction! Pinnacle Group Squeezes Tenants Across the City”) about one of the city’s most powerful real estate companies and their unrelenting efforts to force tenants out of rentstabilized apartments, especially in Upper Manhattan and the Bronx. 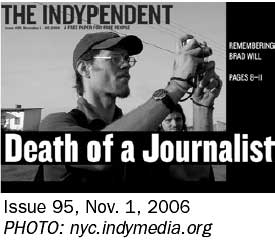 NOV. 1, 2006—Four days after NYC Indymedia journalist Brad Will is assassinated by rightwing paramilitaries in Oaxaca, Mexico, The Indypendent comes out with a special issue on the life and death of a legendary activist.

FEB. 1, 2007—With George W. Bush “surging” more troops into Iraq and the mainstream antiwar movement stymied, Jessica Lee publishes a series of interviews (“Escalating the Antiwar Movement: After 4 Years of Marching, Iraq War Opponents Look to Ramp Up Resistance”) with an array of movement leaders across the country who point toward a likely “counter-surge” of civil disobedience and other more radical, direct action tactics.