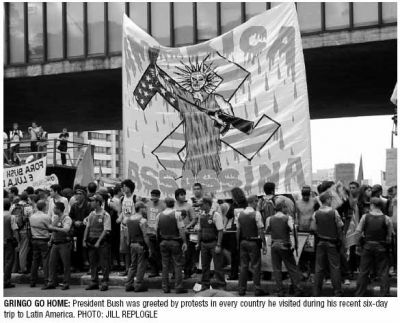 GRINGO GO HOME: President Bush was greeted by protests in every country he visited during his recent six-day
trip to Latin America. PHOTO: JILL REPLOGLE

Six years after George W. Bush took office he remembered that he has southern neighbors and paid them a friendly visit from March 8 to 14, stopping in Brazil, Uruguay, Colombia, Guatemala and Mexico. To be fair, Latin America has probably crossed Bush’s mind in recent years, perhaps when Venezuelan President Hugo Chavez first uttered the word “socialism” and during last year’s long-winded and unproductive immigration debate.

Perhaps feeling eclipsed by Chavez, the White House decided not to utter Chavez’s name during the tour, but Bush couldn’t shake his presence. While Bush was in Uruguay, Chavez was just 30 miles away in Argentina, leading crowds in chants of “Gringo go home.” The day before Bush landed in Guatemala to “push U.S. compassion,” Chavez visited nearby Nicaragua, taunting, “Today the chief imperialist is trying to put out the Sandinista, Bolivarian and freedom fires spreading in these lands, but he can’t in this empire nor in thousands of others.” Many say the Bush tour was an attempt to bolster center-left to right-wing governments, some of whom are playing both sides of the Chavez-Bush conflict. Shortly before his departure, Bush gave a speech outlining aid programs to Latin America.  However, as the Brazilian daily Folha de Sao Paulo pointed out, most of the programs are nothing new.

For his part, Chavez came not just bearing sharp rebukes but also guarantees of aid and development. In Bolivia, Chavez pledged $15 million for flood-ravaged areas, ten times the amount of U.S. aid, according to the Associated Press. In Nicaragua, Chavez signed deals for $20 million “in low- or no-interest loans to help Nicaragua’s rural poor and improve health care and education,” and discussed the building of an oil refinery with a planned capacity of 150,000 barrels a day.

The oil refinery may be of even greater significance than the aid. Venezuela is trying to create a “Bank of the South” to fund development projects as an alternative to the IMF. Largely because Venezuela has been buying up debt from neighboring countries, it has already muscled out the global lender, which has seen its portfolio of loans plummet from $81 billion in 2004 to just $11.8 billion today.

Meanwhile, Bush was left to compete with Cuba in helping improve health care in the region. While the socialist island offers free medical school to thousands of students from Latin America every year, Bush has announced his own school, the Health Care Professional Training Center to be located in Panama. While Cuba sends doctors to toil in the most remote regions of the world, Bush has announced that as of June, the Navy medical ship, the Comfort, will begin a healing tour around Latin America and the Caribbean. At the same time, military medical teams will be trekking to inland villages to treat the poor, said Bush.

On Bush’s first stop, in Brazil, he inked a deal with President Luis Inacio “Lula” da Silva for promoting increased development of biofuels in Latin America. However, in a press briefing before the trip, National Security Advisor Steve Hadley made it clear that Mr. Bush would not discuss the 54-cents-per-gallon tariff on Brazilian ethanol imports to the United States.

Besides contradicting Bush’s devotion to free trade, the hefty tax has helped make sure that the U.S. lags ever more behind Brazil in the move toward non-fossil fuels. In Sao Paulo, some 10,000 people took to the streets on the day of Bush’s arrival, which coincided with International Women’s Day. Signs and slogans were blunt, likening the Bush to Hitler and telling the “assassino” to go home. A day earlier, 800 workers from the Brazilian social movement Via Campesina occupied an ethanol plant owned by the U.S.-based, transnational Cargill. They were protesting the negative environmental and social effects of the highly concentrated biofuel industry in Brazil, particularly the monoculture plantations of sugar cane to produce ethanol.

Bush’s visit to Uruguay also caused an uproar as thousands of protesters took to the streets. Weeks ago one Uruguayan government minister declared, “Bush represents the most condemnable murderer and militarist that exists in the world.” The Bush administration’s interest in this tiny country of 3.6 million is understandable.

Uruguay represents a potential friend amid a sea of anti-U.S. sentiment and Latin American integration. For Uruguay, the United States represents a possible source of export and investment and a large market to sell its beef, textiles or software. But many in Uruguay have not forgotten the disastrous results of the neoliberal 1990s or the U.S. support for the repressive Uruguayan military dictatorship of the 1970s and 1980s.
As one housing activist said at a pre-visit protest, “It’s time for real change … The North American policies have always been the same. We have to say no.”

Uruguay is also a backdoor to a free-trade deal and a way to undermine the five-country regional trading bloc known as Mercosur.

Uruguay’s main trading partner is the United States, which accounts for almost half of its $4 billion in annual exports. The deal has won it attention from its far larger Mercosur partners, such as Brazil.

In violence-torn poverty-stricken Colombia, 20,000 troops were mobilized just to protect Bush as he traveled from the airport to the presidential palace in the capital of Bogota. The threat of violence was so great that a decoy motorcade was dispatched to flush out any attackers on the route. Bush was greeted by questions about the government’s extensive ties to drugdealing right-wing death squads. One opposition party claims that almost 100 paramilitary leaders are tied to President Alvaro Uribe’s party. Bush brushed aside the scandal and instead proposed $4 billion more in mostly military aid under “Plan Colombia.” Since 2000, some $4.5 billion has been given to Colombia, almost all to military and police forces.

In Guatemala, Bush played up the success of a handful of campesinos selling produce to Wal-mart (which now owns 363 supermarkets throughout Central America) and McDonald’s under a free trade agreement known as DR-CAFTA. Few Guatemalans were likely impressed by a photo-op of Bush loading crates of lettuce onto a truck run by the farming cooperative Labradores Mayas. People here were far more concerned about the deportations of scores of Guatemalans seized in a factory raid in Massachusetts by the U.S. immigration service.

Guatemala’s compliant president, Óscar Berger, was forced to acknowledge the anger in his welcoming remarks. He meekly criticized the “differences of opinion” over the issue of migrants, “particularly those who have been deported without clear justification.”

Right-wing Mexican President Felipe Calderon was even more direct, lambasting U.S. immigration policies that criminalize millions of Mexicans who travel north to fill low-paying jobs critical to the U.S. economy, pointedly noting that it is America’s inexhaustible appetite for drugs that fuels trafficking and instability in Mexico.

During his tour, Bush found little love for himself or his policies, and that was just among the hand-picked leaders he met. He appeared defensive on numerous occasions, whether the issue was defending free trade, immigration policies or Colombia’s scandalplagued strongman. Maximum security surrounded the President throughout the trip, which meant that most Latin Americans couldn’t get within ten miles of him.

If he peeked outside the bubble that keeps him safe from troubling ideas, Bush would have seen a region that is slowly but surely shaking off hundreds of years of U.S. domination.  There are many reasons for this, but his disastrous policies half a world away have given more freedom to a region looking for real alternatives to the free-trade model that has proved calamitous.

Reporting provided by Jill Replogle in Brazil and Michael Fox in Uruguay.