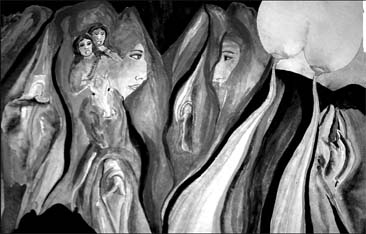 Anoush Ter Taulian’s “Arising From The Circle Womb Of Life”

Women of Color Art Exhibit on Violence Against Women at the Brecht Forum,
451 West St., between Bank and Bethune. The exhibit runs until March 31.

When I was in Kenya a man flung me into a ditch and lay on top of me to rape me. When I started screaming, he pulled a machete out from the back of his shirt and said, “Be quiet or I will kill you.”

I continued to scream and he ran away. I made a Stop Rape poster in Swahili and English of a woman kicking her attacker, armed with a knife, in the balls. A policeman who said my poster was antigovernment arrested me. I spent a night in jail for my poster.

Most of my artistic work deals with violence. I have co-produced with Fred Nyugen an audio CD called The Cost of Genocide – Armenia 1915. Most of the Armenian women in the deportation caravans were raped by the Turks but they are ashamed to talk about it. I spent nine years as a volunteer in the Artsakh (the part of Armenia that was attacked by Azerbaijan) liberation army and videotaped Armenian hostages and torture victims.

I feel an important part of ending wars is ending the patriarchies that disrespect women and are destroying Mother Earth. I believe, during the matriarchy 5,000 years ago, when people didn’t know it took sperm to have children, women were worshipped as life givers and there was no private property. I feel indigenous women and all women of color have a deep matriarchal artistic memory from which we can get knowledge of how to overturn the patriarchy. So I decided to have a women of color art exhibit that brought together African, Asian, Pacific Islander, Latina, Caribbean, Native American and Near and Middle Eastern women creating medicine art to help heal violence against women. Most of the women in this exhibit had never created work dealing with violence against women and produced original works for the show.

All of our cultures have experienced imperialistic attacks so devastating that it has been hard and often taboo to address the violence against women in our own cultures. The Western world wants us to believe the Third World is more barbaric toward women, but the Western world is even more barbaric, from Christian witch hunts to the 25 percent of young American girls who have been victims of incest to the imperialist stifling of democratic freedom movements around the world that would help women. The male art world generally ignores the problem of violence against women and the feminist art movement is white controlled and sometimes racist resulting in a low percentage of women of color artists in museums and galleries.
It is time for women of color to regain their matriarchal power to end male privilege and the rape, beating, mutilation and murder of women for merely being women.