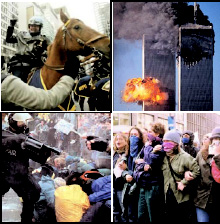 NOVEMBER 1999:
Fueled by growing worldwide opposition to neo-liberal (or, “free-trade”) economics, more than 40,000 people converge on Seattle and shut down the opening meetings of the World Trade Organization (WTO), electrifying millions of people around the world.

NOVEMBER 1999:
The first Independent Media Center (IMC) is launched to cover the WTO protests. The IMC website (indymedia.org) receives over 2 million hits in its first week and outdraws most corporate media websites. The IMC encourages protesters and ordinary citizens to “be the media” and document their own experiences at, before, and after the protests. It also produced a mimeographed daily newspaper and audio and video content that was picked up on community radio and TV stations around the world.

SEPT. 8, 2000:
The New York City Independent Media Center (NYC-IMC) publishes the newspaper Unst8ed to mark the U.N. Millennium Summit in New York City. The NYC-IMC is one of the earliest “permanent” IMC’s designed to last longer than a single big protest. The Unst8ed is quickly renamed The Indypendent. In its first year, the paper focuses its attention on the everyday struggles of New Yorkers and a still-burgeoning worldwide movement against corporate-led globalization.

SEPT. 4, 2001:
The Indypendent begins its second year with a special “Back to School” issue that looks at the growing commercialization of the public school system.

SEPT. 11, 2001:
Three hijacked jetliners slam into the World Trade Center in New York City and the Pentagon in Washington DC. Massive anti-World Bank and IMF protests scheduled in Washington, D.C. for the end of the month are cancelled. The U.S. wing of the “antiglobalization” movement quickly disintegrates. Public attention shifts toward a “Global War on Terror.”

SEPT. 13, 2001:
Asking “wouldn’t fighting terror with terror propel the nation, and indeed the world, into a war where there may be no winners?” The Indypendent publishes a special issue 48 hours after the 9/11 attacks that mixes original first-person reports from Ground Zero with stories that ask hard-hitting questions about a War on Terror, the potential loss of civil liberties and backlash against Arab and Muslim-American immigrant communities.

SUMMER 2002: MARCH 2003:
The now worldwide network of more than 100 Independent Media Centers provides extensive coverage of anti-war actions during the run-up to war.

FEB 15, 2003:
Despite months of Bush administration propaganda, 10-15 million people in more than 600 cities around the world protest the pending invasion of Iraq. In New York City, a half-million people protest, and hundreds are arrested.

AUG 26–SEPT 1, 2004:
A half-million protesters take to the streets outside the Republican National Convention in New York City. Despite widespread calls for more militant direct action, the NYPD maintains control of the entire weeklong event.

AUGUST 2004:
In the month before the Republican National Convention, The Indypendent publishes two special issues with press runs of 100,000- 200,000. It is the largest print run by any radical grassroots newspaper in the U.S. in decades.

OCT. 2006:
The Indypendent wins more awards for excellence in community journalism from the Independent Press Association of New York than any other paper in the city for the fourth consecutive year.

NOV. 2006:
Following widespread dismay at the spiraling disaster in Iraq and the bungled response to the destruction of New Orleans following Hurricane Katrina, Democrats seize control of Congress by a slim majority. Nearly all anti-Bush and anti-Republican activity occurs through “traditional” political channels.