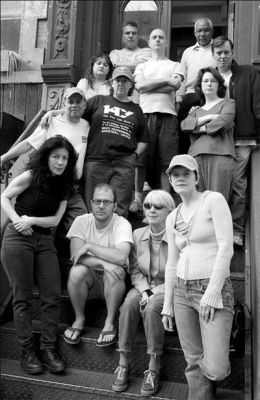 The embattled tenants of 47 East Third Street in Manhattan, trying to keep their landlords from evicting them all, lost a major round Feb. 15 when a state appeals court ruled that landlords can take as many apartments in a building as they want for personal use.

In a 5-0 decision, the Appellate Division overturned State Supreme Court Justice Faviola Soto’s April 2006 ruling supporting the tenants. Justice Soto had held that the building’s landlords, Catherine and Alistair Economakis, were violating the state Rent Stabilization Law and Code by trying to take all 15 apartments in the five-story building so they can convert it into their private home.

The appeals court held that the law does not limit the number of apartments a landlord can claim for personal use. The phrase “one or more dwelling units” in the statute, the decision said, means just that – that any number is legal. The court also rejected tenants’ arguments that the landlord was illegally taking apartments out of the rentstabilization system without permission from the state housing agency, citing an “unambiguous” clause in the law that says owners do not have to get such permission to claim apartments for personal use.

“We’re all disappointed with the decision, but we’re hoping that the Court of Appeals will take the matter up,” says Stephen Dobkin, the tenants’ lawyer. “If not, we hope Governor Spitzer and the Legislature will take it up. Otherwise, it will open up a hole in the rent regulations that will allow owners to perform mass evictions based on their personal wealth.” In the last few years, landlords have increasingly claimed “personal use” to try to empty rentstabilized buildings.

Because the decision went unanimously against them, the tenants will have to ask the Appellate Division for permission to appeal to the Court of Appeals, the state’s highest court. At least two dissenting votes are needed for automatic permission.

If permission is denied or the tenants lose their appeal, then the case will go back to Housing Court for trial on the eviction attempts against individual tenants. There, the Economakises will have to prove that they genuinely intend to move into the building and are not just running a scam to empty it out so they can get more money for the vacant apartments. The couple has repeatedly insisted that they have every intention of moving in – but the consequences for fraud are minimal. The only penalty is that owners can’t raise rents on rent-stabilized apartments in the building if they fail to occupy the units they claim for at least three years after taking them.

The Appellate Division noted that in its decision, but said it was an issue for the legislature, not the courts.

In seeking an appeal, Dobkin says he will argue that the Appellate Division overlooked the overall intent and purpose of the rent-stabilization law. That owners can take “one or more” apartments, he contends, “does not mean landlords can evict a whole building and leave it vacant for years.”

The Economakises already have eviction cases pending against five of the nine households left in the building, and began serving eviction notices on the others after the decision.

The owners are also combining four of the vacant apartments into a triplex. That’s illegal, says tenant David Pultz, because the Economakises have tried to circumvent Buildings Department regulations by amending a permit intended for ordinary apartment renovations instead of getting the type of permit required for more intensive reconstruction such as a triplex. In the last year, the Buildings Department has issued four stop-work orders on the building, two for the triplex and two because there wasn’t proper safety netting to protect tenants and neighbors from construction debris falling off the roof.

Fumes from polyurethane in the apartments being renovated have been hell on the tenants’ lungs, says tenant Ursula Kinzel, and the landlords have refused to open windows or use extractor fans while applying it. The Economakises also installed five surveillance cameras in the building, she adds, and converted the frontdoor lock to one opened by electronic card keys. When Kinzel asked for an extra key so she could have one for house guests, Alistair Economakis sent her a letter saying she could have one temporarily – if she paid a $15 deposit and provided the name of her guest at least five days in advance.

“It’s really getting horrible to live here,” she says, “but that’s the plan.”