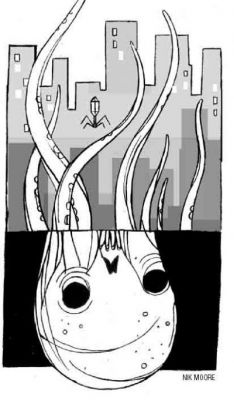 There’s a brilliant image near the start of Bong Joon-Ho’s thrillingly subversive monster movie The Host, where a group of people throw tons of food into the Han River at a mysterious creature hiding underwater. Bong positions his camera high, with his actors gathered on a shore at the very bottom of the screen and a huge, unnerving mass of water filling the rest of the frame. This shot produces typical monster movie reactions, from the gallows humor of seeing foolish people taunt a monster to the suspense-laden dread of knowing said monster is about to attack. But there’s also something else, a kind of empathetic disappointment, for we’ve already learned in the film’s opening scene that it’s precisely this kind of wanton destruction of nature that has produced the film’s amorphous squid-like terror.

A blockbuster success in its native South Korea, The Host is a rarity amongst genre exercises: an action-horror movie with a fully articulated global conscience. Mixing the expected clichés of monster moviedom with oddball humor, a genuinely touching family drama, and pointed critiques of various socio-political institutions, Bong’s film should prove an incoherent mess. It’s in fact the opposite, managing the neat trick of juggling all these approaches and more within a given sequence, scene, or as described above, a single shot.

Bong reveals this skill from the first scene, where a U.S. Army scientist demands that his Korean assistant dump numerous bottles of formaldehyde into a sewer that leads to the Han River, simply because they’re “too dusty.” It’s a quiet scene, and if its critique of clueless American destructiveness seems obvious, the tension of Bong’s symmetrical framing and creepy sound design make it genuinely unnerving. Throughout the film, the multi-layered content is enhanced further by Bong’s nearfaultless command of his craft.

As he introduces the film’s hero-family – a resourceful preteen abducted by the monster, her schlubby, slow-witted father, a drunken failure of an uncle, a near-miss Olympian archer aunt, and a dumb-wise grandfather – Bong keeps the tension palpable while layering almost every scene with some kind of commentary. Beyond its critiques of the U.S. military (who also oversee a supposed virus outbreak that leads to the deployment of “Agent Yellow” – ha!), the film offers protestors under attack, a willfully ignorant news media, a shady Haliburtonesque company, assorted coverups, and, of course, our collective abuse of nature. More pointedly, this might be the first monster movie to show protagonists also defending themselves from dire economic hardship.

Best of all, the film does this while fleeing a squid monster and making really funny jokes about SARS and the democratization of South Korea. Most genre films with something on their minds do their action/horror/suspense thing, then take a break to offer commentary via boring dialogue scenes, essentially interrupting our cake to force-feed us brussel sprouts. The Host is a shining exception—the thrill-ride that makes you think and feel while scaring the laughs right out of you.