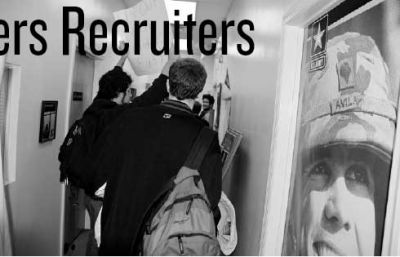 Declaring the Chambers St. military recruiting station a “liberated zone,” 20 members of the Students for a Democratic Society occupied the building for two hours on March 12 before being arrested.

“It’s not business as usual anymore,” said Pace University senior John Cronan. “People are not going to sit here anymore not doing anything about [the war].”

Over 100 students mostly from New York colleges participated in the Monday afternoon action, in which two contingents of marchers from the New School and Pace University broke into the recruiting station, shouting “Troops out now!” and “SDS is back again” and then sat down, eventually singing a rendition of “we shall overcome,” according to participants.

“We kind of caught them by surprise,” said Cronan, who helped last year to found the SDS chapter at his college.

“It was very spirited. People knew what they were getting into,” said Matt De Vlieger, a student from the University of Central Florida.

Breaking with the strategy of large permitted protests against the war, the sit-in is part of a tide of direct actions being organized by the SDS, which has grown to more than 160 chapters on college campuses and high schools since the beginning of 2006.

“It was pretty cool being able to do something direct to stop the war machine. The peace marches don’t directly get anything done,” said Pace freshman Meaghan Linick who was also arrested in the action.
Info: studentsforademocraticsociety.org