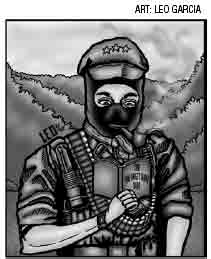 Uruguayan journalist Eduardo Galeano once called Subcomandante Marcos “the voice for many voices.” For over a decade, Marcos has been the voice of Chiapas, a region he once labeled “Basement Mexico” in reference to its indigenous population’s low standing in Mexican society. Yet the jungles of southeastern Mexico also serve as the country’s foundation, providing “Penthouse Mexico” with natural resources, and Marcos with the inspiration for a rather unusual political strategy. Just as Ancient Mayans once narrated fables in order to make sense of the Spanish invasion, the Zapatista spokesman uses storytelling to further his cause, putting a modern spin on an ancient indigenous tradition.

Marcos happens to be a naturalborn storyteller, the author of an award-winning children’s book and a series of political fables laden with animal imagery. In some parables, he writes in the voice of a beetle named Don Durito. In others, he compares Mexico and its neoliberal policies to primitive grotesque creatures, including a “beast” and a bloodthirsty lion.

For a recent, and ambitious, project, he teamed up with popular Mexican author Paco Ignacio Taibo II to write The Uncomfortable Dead, a murder mystery that follows a Zapatista detective’s investigation of a Dirty War criminal. Marcos and Paco penned alternating chapters, using a method known as Four Hands, and the result is a highly unconventional and politically intriguing noir. The plot is centered mainly in Mexico City (known in the novel as “the Monster”), and captures the disparity between Mexico’s real jungles and its largest urban center, where city folk who “don’t know how to explain how they feel” lurk on subways and in shopping malls, indifferent to the injustices carried out in Chiapas.

Marcos has the advantage of understanding both sides of the class divide. He was born and raised in Tampico, a relatively wealthy urban center on the Gulf Coast, and it was only after attending college in Mexico City that he began to live among Chiapas’ indigenous poor. Like Ralph Nader, a formerly middle class idealist who survived on a meager salary while crusading for consumer rights, Marcos commits to the Zapatista slogan “everything for everyone, nothing for us,” making a once-distant cause his own.  This sincerity shines through in all of Marcos’ writings, though most visibly in The Uncomfortable Dead. He makes constant reference to the EZLN in the murder mystery, even pointing to his own role as the movement’s spokesman. Yet he seems to poke fun at the idea of propaganda, writing with a twinkle in his eye and a down to – earth likeability.

In one scene, he writes mockingly, “El Sup was going [to a jazz festival] disguised as a saxophone, and after that he was going to do some table-dancing at a ‘girl’s only’ club to raise money for the cause.” Marcos will charm anyone who picks up his novel, and some readers may find themselves itching to look into, if not support, the Zapatista cause.