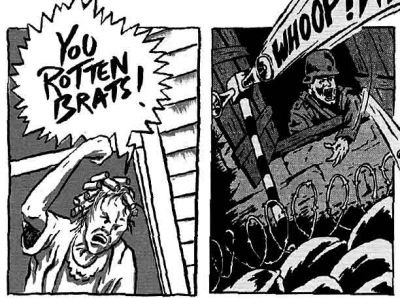 Author Kevin Pyle is familiar with the theme of war and its effects on Americans. He explored this is in his previous works in World War 3 Illustrated and in one of his own graphic novels, Eye of God. In Blindspot, he focuses on the vivid war fantasies of an American suburban boy.

Dean shared many adventures with his three friends Glenn, Todd and John. The boys’ favorite game was soldiers, and their theater of operations lay in the backwoods just outside Dean’s home. They lay under railroad tracks as trains whizzed above their heads and played capture-the-flag with an old woman’s underwear. Floundering in grammar school and facing parental restrictions on his TV watching, Dean retreats further from stifling suburban life and into his military fantasies, seeing every confrontation with authorities as another combat operation. The pressures of reality mount as the boys’ play leads them to destroy a homeless man’s handmade shack and to a stash of porn magazines.

Looking for more, Dean gets caught raiding a neighbor’s garage and faces harsh repercussions in school. After seeing graphic depictions of war in a library book, egged into a fight with a boy he barely knows and drifting from his friends, Dean faces his increasingly consuming fantasies in the face of a harsh world.

The author uses simple line drawings and single-color washes, a popular technique in indie comics. Pyle uses the power of color to elicit feeling and create atmosphere in his scenes. Dean’s suburban world is rendered in monochromatic washes of light teal and sky blue. The four boys travel through their theater of operations in camouflage-green, the color of Dean’s introspection and happy moments. When confronting enemies, the story shifts to four-color combat scenes right out of 1950s Sgt. Rock comics.

Although the theme is simple, Pyle’s book is anything but. Dean is an intelligently written character trapped in his war fantasies. Pyle does an excellent job of avoiding clichés, condescending dialogue, and stereotypes, and creates an inviting and evocative story.

Due to the proliferation of the superhero genre, comics are synonymous with juvenile entertainment. Blindspot uses this fact to explore the dichotomy of fantasy and reality, a theme that should resonate with our fantasydriven society. This book comes out at a great time, to coincide with copious ads for the Navy, Marines, and U.S. Army littering the latest adventures of our favorite web slinger, mighty mutants, and dark knights. Blindspot is a worthwhile addition to any collection, and should be required reading for anyone who’s ever dreamed of being a war hero.