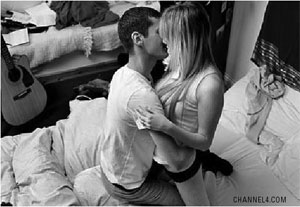 A recently released congressional study on abstinence-only education has confirmed the conventional wisdom that this tool of conservative ideology fails teens miserably.

Mathematica Policy Research Inc. surveyed more than 2,000 16 year-olds, half of whom had abstinence-only education and half of whom had sex education that included information on contraception. Startlingly, the results for both groups were the same:

About a quarter of each group had had sex with three or more partners. Additionally, teens continue to be at high risk for sexually transmitted diseases (STDs). Almost half of the 19 million new STD infections recorded in the United States each year involve people aged 15 to 24.

“Just saying no is not working,” said Cecile Richards, president of Planned Parenthood. “These are efforts by the federal government to fund ideological programs, not health care or medical programs,” reported P.J. Huffstutter in the L.A. Times in April.

Most funding for abstinence-only education comes from Title V, the Bush administration’s addition to the Welfare Reform Act requiring states to match 75 percent of all federal money received and forbidding any mention of contraception other than of its propensity to fail. The White House has proposed $191 million for the abstinence program in fiscal 2008 — an increase of $28 million over current funding.

According to a New York Times report last July, New York State received $3.7 million from Washington for abstinence-only programs, which it had to augment with $2.6 million of its own. Even though New York schools must provide education about HIV and AIDS, they do not have to offer broader sex education. Anecdotal evidence suggests that sex-ed curricula vary widely in New York City. “From what the kids tell me, it seems to depend on who your teacher is,” says Amanda Theiroff of Children’s Press Line, a youth reporting project in Harlem.

Elizabeth Magron, a 14-year-old freshman at Dominican Academy, a Catholic school on East 68th Street, said she is satisfied with her sex ed, although abortion has not been mentioned. Magron feels that abstinence-only education is “unrealistic in today’s society.” She knows other teens who have taken abstinence pledges but break the vow.

Title V is based on ideologies that dictate that “a mutually faithful monogamous relationship in the context of marriage is the expected standard of all human sexual activity” and that “sexual activity outside the context of marriage is likely to have harmful psychological and physical effects.” Leslee J. Unruh, head of the South Dakota-based Abstinence Clearinghouse, states, “There are kids who don’t want to know how to put on a condom, because they don’t want to have sex.”

Indeed abstinence-only education is intentionally divorced from reality. In its campaign to end funding for abstinence-only education, Sexuality Information and Education Council of the United States (SIECUS). SIECUS reports that Ron Haskins and Carol Statuto Bevan, congressional staffers who were key in crafting the abstinence education language, wrote that “the explicit goal … is to change both behavior and community standards for the good of the country.” They went on to say that the “standard was intended to align Congress with the social tradition … that sex should be confined to married couples. That both the practices and standards in many communities across the country clash with the standard required by the law is precisely the point.”

An Oct. 3, 2006, report by the Government Accountability Office (GAO) helped foment resistance to Title V on a state level, concluding that abstinence programs had not been proven to work and at times disseminated inaccurate information. In the report, one state official described an instance in which educational materials “incorrectly suggested that HIV can pass through condoms because the latex used in condoms is porous.” The GAO report, along with the Mathmatica survey, has dissuaded some states from receiving Title V money.

Fed up with the federal mandate to fund failing abstinence-only programs, states including California, Wisconsin and New Jersey are rejecting the program altogether. In California, state lawmakers determined that the state’s abstinence-only program had not been effective. In October, New Jersey said it would do without the $800,000 it had been receiving. In March, Democratic Gov. James Doyle said Wisconsin would no longer accept nearly $600,000.