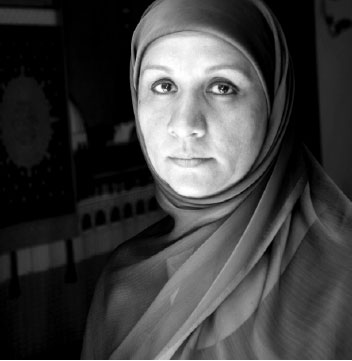 Mahboba Rawi, 38, has lived in Australia for 25 years. Rawi began wearing the hijab after the accidental death of her son and says the scarf has brought her closer to God. PHOTO: LISA D’AMBRA.

SYDNEY, AUSTRALIA—It’s late afternoon as a young woman in a yellow-string bikini carries her fiberglass short-board toward the surf, her elongated shadow drifting past the blue hijab of another woman lying on the beach with her children.

On the same beach, young Muslim women are training to become surf lifesavers as part of a $600,000 federal program designed to better represent Australia’s diverse mix. Many of the lifesavers wear a redand- yellow burqini, a full-length swimming outfit that allows them to follow their religious beliefs while tackling the rips and currents of Australia’s famous coastline.

Cronulla Beach, in Southern Sydney, wasn’t so tranquil in December 2005 when thousands of Anglo-Australians went on an anti-Muslim rampage, resulting in an unprecedented beach lockdown. A crowd of 5,000, organized by word of mouth and text messages, reportedly chanted slogans such as “wog-free zone,” “ethnic cleansing unit,” and “Lebs go home,” in reference to the estimated 250,000 Australians of Lebanese descent.

Anglo-Australian teenage boys scrawled, “We grew here, you flew here” in black marker on their chests, epitomizing a campaign targeting non-white immigrants who frequent the beaches, specifically the growing Muslim population in Australia.

One result of the riots was Muslim women became a political football. The incessant anti-Muslim rhetoric espoused by politicians and the media was masked as supposed concern for the protection of Muslim women. Politicians suddenly became feminists — talking of “our women” and “their women” in a campaign to liberate Muslim women from what was perceived as a misogynist religion.

‘THIS SCARF IS MY IDENTITY’

Absent from this debate were the actual voices of Muslim women, who, meanwhile, were being spat on, physically attacked and having their headscarves ripped off on the street. While the debate over the headcoverings, commonly known as a hijab, is symbolic of the larger issue of xenophobia in Australian society, many Muslim women feel they have been denied the opportunity to represent themselves.

“This scarf is my identity, and I am peaceful with it,” says Mahboba Rawi, 38, as she sits on a couch in her townhouse in the Sydney suburb of Ryde.

Born in Kabul, Rawi fled Afghanistan at age 14 to escape persecution by the pro-Soviet government after she led student protests against the Russian invasion. With no passport and little money, Rawi walked over the mountains from Kabul to Peshawar, Pakistan, and then on to India before marrying and coming to Australia on her own in 1984, at age 16.

Once in Sydney, Rawi established Mahboba’s Promise, a charity that provides food, shelter, medical care and education to widows and orphans in Afghanistan. Despite the humanitarian work in her birth land, she always returns to Australia.

“I loved this country,” Rawi says of Australia, “from the moment I walked onto the soil.”

Since arriving two decades ago, she has organized English programs and swim lessons for Muslim women in Sydney’s western suburbs. She feels she has an obligation to rectify the image of Muslim women in the media and public sphere.

“Talking is not enough,” she says abruptly. “It’s a hard job to make people understand you… what I do is a tiny bit of help to show that we are normal like everybody else.”

Ironically, Rawi believes that it is public opinion, not cultural traditions, that are oppressing Muslim women in Australia. She blames the criticisms of the hijab on talk radio and in newspaper editorials for the disappearance of Muslim women from Sydney’s public spaces. She says this fear to leave the house because of harassment or violence is limiting Muslim women’s ability to practice their own faith, rendering them “prisoners in their own homes.”

After 20 years of living in Australia she observes, “It is so horrifying to see that level of hate created in the Australian community that didn’t exist before.”

Australia has a long history of racism. From its founding as a country in 1901 to as late as the mid-70s, the Australian government employed a “White Australia” policy. Later, as the country began to accept migrants from Italy and Asia, it became increasingly pluralistic. But public debate never turned away for long from the fear of being “flooded and invaded by Asians,” as espoused by the right-wing One Nation Party during the 1990s.

Recent events such as the September 11 attacks, the Bali Bombings, and the wars in Afghanistan, Iraq and Lebanon have meant that Australia’s Muslim population has been the target of harassment and racism. In 2003 the New South Wales Anti-Discrimination Board argued that these debates had led to a “damaging environment of anti- Arabic and anti-Muslim sentiment” and the Australian Arabic Council recorded a twenty-fold increase in complaints.

This increasingly hostile climate has touched Rawi’s life as well. When 88 Australian citizens were killed during the Bali Bombings in 2002, teenagers burnt down Rawi’s front fence. During the 2006 Israel- Lebanon conflict, her 10-year-old son was called a terrorist at school. This year a man at a train station followed Rawi, swore at her and told her to go back to her own country.

She says she wanted to cry, “I went back to my country, but 75 percent of the buildings were demolished, all there is was this horrible war, there is no house for me. I don’t have a home to go to. This is my home.”

Such experiences are not isolated to Sydney. On September 29, 2006, a suburban mosque in Perth was subjected to a drive-by shooting, the latest in a series of attacks including robberies and vandalism. Shots were fired into a second-floor window upon a congregation of nearly 400 people during evening prayer in the month of Ramadan. “Kids were screaming, mothers were running. People wanted to protect their children,” reported Ahdielah Edries, President of the Islamic Council of Western Australia.

For Rawi, the initiation with the hijab was not an easy one. She began wearing the scarf in Australia when her first son died in a tragic accident at the Kiama Blowhole landmark, about 75 miles south of Sydney. She says the scarf brought her closer to God.

She insists that she doesn’t follow orders from her husband, father or her brother, and claims, “So many Muslim women love to wear a scarf, and people don’t realize this. You look colorful, it’s our fashion, it’s our identity, it’s our culture, it’s our religion.”

Unfortunately, the consequences of wearing a hijab in Australia are not always so simple. Author of Does My Head Look Big in This? Randa Abdel Fattah says that she stopped wearing the hijab because of the difficulty she experienced in trying to find a job.

Following the Cronulla riots, the hijab debate became coupled to the issue of integration. In October 2006, then Government Opposition Leader Kim Beazley called for a clause in Australia’s visa application forms providing that applicants must adopt “Australian values.” The suggestion was criticized as shifting the focus away from problems within Australian culture and presenting outsiders as something to be feared or controlled.

Taghred Chandab, 29, journalist and award-winning author of The Glory Garage, a book about her experiences growing up Lebanese Muslim in Australia, found the suggestion bizarre and bemusing, and wonders if many Australian-born Aussies would pass the test.

“Apart from cricket, wearing singlets and wearing thongs, which are all stereotypes in themselves, one cannot attribute any one thing to being Australian,” she claims. “Being Australian encompasses many different values, which I believe are generally common sense and apply in every country.”