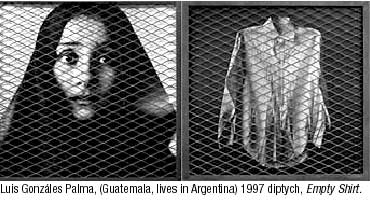 The exhibit currently showing at El Museo del Barrio is a multimedia examination of the disappeared of Latin America.

The “disappeared” were the tens of thousands who were kidnapped, tortured and killed by right-wing military dictatorships from the late 1950s to the 1980s. An estimated 30,000 were disappeared in Argentina alone by that country’s military junta.

The artists participating in this show have each experienced the horrors of military terror, as friends and family of the disappeared, and as activists in the resistance. Many of the disappeared women gave birth in captivity, and their children were adopted without their knowledge by police or military families. The biological parents were killed soon after. Identidad, a collaboration among 13 Argentine artists, addresses this tragedy. It is a walled photo installation with 132 mirrors, each indicating a missing child born in captivity, interspersed between pairs of portraits. This is the longest piece in the exhibition, snaking along the wall and reemerging around corners.

“Often the first evidence that someone had been taken away was finding their abandoned bicycle, the preferred method of transportation for the resistance,” noted Traverso, himself an activist during the resistance.

Marcelo Brodsky explores the disappearance of his brother and best friends in Buena Memoria, a photo and video installation. One of his photos is an eighthgrade classroom portrait with the faces of the “disappeared” crossed out. Every schoolroom in 1970s Argentina was scarred by the dirty war, including his own.

Los Desaparecidos is an unforgettable exhibition. It is also a sad one for audiences here considering the role of the U.S. government in funding and training many of the military dictatorships. Many of the pieces prompt us to look at our own relationship to events and people who were disappeared and forgotten in America’s backyard. As the exhibition notes state, “Remembering today will help us to avoid these events being repeated tomorrow.”