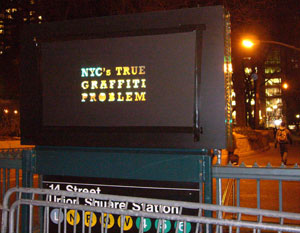 In an epic battle for eyeballs, it’s anti-advertising vs. corporate advertising, but who chooses the weapons? Increasingly, marketing firms like AltTerrain and Interference Inc. have been appropriating the ideas and technology of street artists to push products that break through the clutter. With fines for illegal advertising ridiculously low and millions to be made, it’s literally gotten ugly. However, as ad firms go guerrilla, the culture jammers stay one step ahead.

“What all marketers are dealing with is an absolute sensory overload,” marketing pro Gretchen Hofmann told The New York Times in January. Success, then, means standing out from the din of commercial pollution. Guerrilla marketing techniques – ones that subvert the usual cluttered channels and forge new canvases and mediums – are among the more potent tools in an advertiser’s arsenal.

Counter-corporate artists Evan Roth and James Powerdly founded the Graffiti Research Lab (GRL) as fellows at Eyebeam, a center for art and technology in Chelsea. They have graced the pages of PR Week and have been approached by Disney and Clear Channel for their Loaner (a powerful bike-mounted system for drawing on buildings with light known as L.A.S.E.R. Tagging).

The Throwies, developed with open source technology, were appropriated by Interference Inc. for the Cartoon Network ad campaign that led to a bomb scare in Boston in January. GRL quickly distanced itself from the incident and posted on its website, “This is NOT the work of the Graffiti Research Lab … It’s just more mindless corporate vandalism from a guerrilla marketer who got busted.” They have also learned from this incident, refusing to loan the bike to corporations. 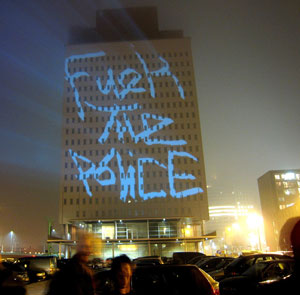 PHOTOS: (Top) One of four public installations of ‘Light Criticism’ placed in January in Manhattan by the Anti-Advertising Agency with Graffiti Research Lab (GRL). Despite being removed by the Transit Authority the next day, the film documenting its installation has been viewed by hundreds of thousands. (Bottom) GRL’s ‘L.A.S.E.R. Tag’ was projected in February 2007 with the Mobile Broadcast Unit in Rotterdam, Holland. PHOTOS COURTESY OF EYEBEAM AND GRAFFITI RESEARCH LAB

Turner Broadcasting, owner of Interference Inc., settled with the city of Boston for $2 million for the mishap, which “tickled” Steve Lambert, CEO of the Anti- Advertising Agency (AAA) and a fellow at Eyebeam’s Research and Development OpenLab. Though a minor expense for Turner – who grosses $600 million annually – this settlement was considered abnormal for corporations who consistently are slapped with small fines for illegal advertising.

In 2002, a $50 fine was given to Microsoft Corp. for putting butterfly stickers on New York City sidewalks. In December 2006, New York branches of Chase Bank were merely threatened with a $50 fine per violation for two dozen projections of the Chase logo on the sidewalk.

In comparison, graffiti artists can be fined up to $350 per violation and jailed for repeat offenses. Lambert said, “Graffiti writer Avone is at Rikers right now awaiting trial, can’t afford to post bail, and is looking at a year in prison. The CEOs of marketing companies, who knowingly and repeatedly break the law to promote their clients, and make tens of thousands of dollars … they’re not at Rikers.”

Further injustice unfolded in Brooklyn on the end of an L train platform on March 23. Lambert recalled, “I saw a kid on the Lorimer stop around 2 a.m. surrounded by undercover cops who were arresting this kid for writing something on the wall. They hauled him away in cuffs. You would really have to be looking to find what he wrote. The whole platform is covered in ads. The real blight is being paid for and put up.”

Michael Bakunin, an anarchist tagger who has recently been writing “Animal Cruelty” on circus ads, thinks graffiti should “inspire revolt and carry on anarchist ideals … and get people to stop being consumer zombies.”

“If [advertisers] reach consumers out of the house, they’re more likely to act than if they’re sitting on their couches,” said Jack Sullivan, VP at Starcom USA, to Louise Story of The New York Times in January. Advertising is sold in eyeballs, or cost per impressions (CPM), and Manhattan has more eyeballs per inch per minute than any other metropolis in the nation. While advertisers clamor to plaster the outdoors, they face the ubiquitous expense of New York real estate, where one wall of a bus stop costs $1,000- $5,000 per month. These costs, and the competition of other advertisers, make the fight for attention fierce, fueling the impetus to find new terrain.

GRL’s Powerdly advised street artists at a recent Eyebeam workshop, “It’s easier to apologize than to ask permission.” Unfortunately, corporations already know that it is cheaper and more effective to use guerrilla marketing illegally and pay the tiny fine.

Lambert challenged the appropriation of public space by corporate advertisers in his latest piece, “Light Criticism,” by pasting cardboard stencils over video advertising monitors at subway entrances. The stencil, illuminated by the light from the monitors, read, “NYC’s True Graffiti Problem.” The video documentation of this project garnered more than 100,000 hits in the first week. This piece is reminiscent of Paper Tiger Television’s use of cellophane with anti-advertising messages placed over a television screen in its 1985 broadcast from the Whitney Museum.

But not all street artists can, or want to, be anti-corporate. Rumors like “Barry McGee got picked up by Adidas” or “Neckface is doing Vans now,” spread throughout the street artist community with mixed admiration and disgust.

“But what if Neckface’s Van’s billboard paid for a round of chemo for his grandmother?” offered Lambert. “There’s a measurement and you need to see who comes out ahead. On the artists’ side, they get a space and get to work in the daylight, but how does working with a company compromise what they are saying or could say? Do they leave with their integrity? The corporation invariably comes out ahead, it gets borrowed legitimacy and credibility with customers. Whatever money the artists gets, the company makes more.”