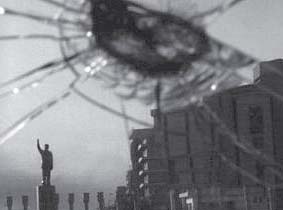 Literally hundreds of books have been written about the Iraq War, dozens by reporters, more than a score of military histories, and at least a half-dozen both on the reconstruction debacle and the Kurdish question.

There has been a dearth of material on mercenaries in Iraq, however. By some estimates, nearly 50,000 corporate gunslingers are riding shotgun for the U.S. war effort, a force accused of committing numerous atrocities against Iraqis but which has so far been immune from prosecution under U.S. or Iraqi law.

Into this breach steps Jeremy Scahill with a remarkable work on Blackwater, perhaps the most notorious mercenary company operating in Iraq. Blackwater became a household name after four of its employees were ambushed, killed and dismembered in Fallujah in 2004, leading the United States to destroy the city of 300,000 in retaliation.

In detailing the rise of Blackwater, Scahill has uncovered shocking connections between Christian fundamentalists, the Bush administration and men who are trying to outsource war itself.

The story of Blackwater is the story of its founder, Erik Prince. A former Navy SEAL , the young, fabulously wealthy, Prince and his immediate family have bankrolled the groups behind such Christian extremists as Gary Bauer, James Dobson and Tim LaHaye. Scahill describes Erik Prince as being in the thick of the “right-wing effort to unite conservative Catholics, evangelicals and neoconservatives in a common theoconservative holy war — with Blackwater serving as a sort of armed wing of the movement.”

What is at stake then is not just profiting from war or even running foreign policy in the shadows, but creating a private military force closely allied with extremists who want to usher in a theocratic state.

The incident in Fallujah was a turning point in the war, one-half of a twin Sunni-Shia uprising that signaled that, while the United States could fight on for years, it could never win. Scahill details how the ambush might never have succeeded had Blackwater not decided to skimp on men, armored vehicles, intelligence gathering and planning for the mission (of guarding kitchen equipment).

All these decisions were of course consistent with maximizing profit, the sole principle of any corporation. Because the ambush did succeed and Gunslingers Blackwater: The Rise of the World’s Most Powerful Mercenary Company Jeremy Scahill Nation Books 2007 The Occupation: War and Resistance in Iraq Patrick Cockburn Verso 2006 the Bush administration reacted so violently, Fallujah has entered history as the Iraq War’s Guernica.

In crafting a comprehensive look at Blackwater, Scahill reveals many other important nuggets, including the company’s expansion into domestic policing following Hurricane Katrina and its role in the big-power struggle over oil wealth in the Caspian Sea. This is the privatization of foreign policy. By turning over strategic operations to Blackwater, which is training an elite commando force in Azerbaijan, the United States can maintain a low profile in the country, conveniently nestled between Russia and Iran.

Flush with money and one of the largest private military training facilities in the world, Blackwater has even grander visions. It’s pushing for a thousands-strong private army, one that its executives envision being deployed in hotspots from Haiti to Darfur. It’s a tempting possibility for an adventurous president, observes Scahill, enabling “an endless parade of invasions, covert operations, occupations, coups d’état.” Because no one is counting and few are reporting mercenary deaths, it could also allow a war to escape scrutiny.

While invaluable, Blackwater could have been trimmed. Some chapters are tangential, delving extensively into the backgrounds of company executives or an overly detailed account of a Blackwater plane that crashed in Afghanistan. Nonetheless, Scahill has made an important contribution, one that will hopefully bring more scrutiny to the dangers of privatized war.

Patrick Cockburn’s account of the Iraq War, The Occupation, is lean but masterful. Having reported from Iraq for nearly 30 years, Cockburn brings tempered observations to the nightmare in which Iraq is caught.

Unlike other reporters, Cockburn doesn’t spend chapters writing about the “mistakes” of the Bush administration. That’s because he thinks the resistance was inevitable and Sunni-Shia sectarianism almost unavoidable. He writes that the “Sunni Arabs were always going to resist the occupation” and decisions in and around Baghdad by the U.S. occupiers only sped it up.

The Occupation is suffused with a dark humor. Cockburn recounts the words of one U.S. general, who told an Iraqi reporter who complained that noise from low-flying helicopters (“the sounds of freedom”) was terrifying children. He tells how Donald Rumsfeld wanted Rudy Giuliani to be made the new mayor of Baghdad and how pro- Baathist Iraqi prostitutes operating a brothel in the Green Zone used their lipsticks to scrawl anti-American slogans on the mirrors in Arabic, which the Americans were unable to read.

The book is sprinkled with accounts of Iraqis killed or wounded by Americans for no reason. In almost every incident they are prominent individuals — a doctor, college dean, a general, an aide to Iraqi President Jalal Talabani. The unspoken implication is that if so many well-known Iraqis suffered at U.S. hands, then many more less notable Iraqis were added to the body count.

Cockburn deftly historicizes the war, noting that it was not so much “traditional religion that triumphed in Iraq after the fall of Saddam Hussein but religious nationalism” of different strains among Sunni and Shia Arabs. Sectarianism also reared its head from the start of the occupation, when a Shia ayatollah was killed in the holy city of Najaf on April 10, 2003. The perpetrators, however, were other Shia, indicating the complexity of the war that would result.

The Bush administration isn’t absolved, though. Pundits and politicians have repeated myths about “ancient hatreds” so many times that they seem to believe it. As Cockburn recounts, it was U.S. actions — throwing Sunnis out of jobs en masse and replacing them with exiles from Shia and Kurdish parties, the use of Shia-based death squads against the Sunnis, the three elections in 2005 — that systematically alienated Sunnis from the government and political process that turned sectarian tensions into civil war.

For those looking to gain an understanding of the Iraq War, there is perhaps no better book than The Occupation.