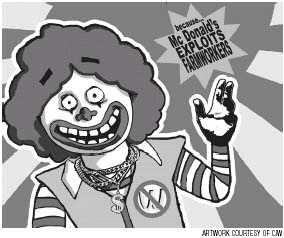 South Florida’s Coalition of Immokalee Workers (CIW) is going after Ronald McDonald. Two years ago, the coalition’s nationwide campaign won a historic victory over Taco Bell, forcing the fast-food giant to pay tomato pickers a penny more per pound and adhere to a labor code of conduct.

Organizer Lucas Benitez told The Indypendent that CIW has been pleased with the implementation of the Taco Bell agreement and that workers have been receiving an extra check when they pick tomatoes for Taco Bell. If the tomato-pickers’ raise were implemented across the fast food market, it would mean approximately $7,000 more in annual income for workers, bringing their earnings only up to poverty level.

“We wrote to McDonald’s asking them to join the [Taco Bell] agreement,” Benitez explained, but over the last two years, “the company has allied with the growers.” In particular, shortly after CIW launched its public pressure campaign in late 2005, McDonald’s announced that it would only buy tomatoes from farms certified under the newly developed Socially Accountable Farm Employers (SAFE) protocols. This measure, along with further “rigorous new practices,” the company claimed, would result in workers earning more than the extra penny per pound CIW has campaigned for. To back up its assertions, McDonald’s commissioned two studies, which have been criticized for being methodologically unsound.

CIW responded by asking, if workers were really earning so much more, why not agree to guarantee the penny-per pound raise? The group further pointed out that the new practices did not provide for any worker input and consisted largely of standards already required by law.

In an “Open Letter to Ronald McDonald” published on wiretap.org, Jordan Buckley, a member of the Student – Farmworker Alliance affiliate in Austin, Texas, observed that, “It is often more strategic to organize for social change at the point of consumption rather than the point of production.” And so, as in the 2005 Taco Bell campaign, CIW is going on tour to raise consciousness and build pressure on McDonald’s. Approximately 70 workers will go on a 10-day tour through five states beginning April 7. The high point will be a rally outside McDonald’s global headquarters in Oak Brook, Illinois, on April 13, followed by a Carnival and Parade for Fair Food, Real Rights and Dignity in Chicago on April 14. Those scheduled to join CIW in Chicago include Tom Morello and Zack de la Rocha of Rage Against the Machine, and Dolores Huerta and John Sweeney (AFL-CIO).

Benitez encouraged those who wish to support the campaign to join them in Chicago. The campaign is also asking supporters to organize local events at McDonald’s locations.

On April 27-29, the Alliance for Fair Food, which works in partnership with CIW, is cosponsoring a Clean Clothes and Fair Food Conference in New York at Columbia Law School. Organizers are planning a variety of actions following the conference, including sending groups to 100 McDonald’s restaurants around the city to deliver letters asking the company to join the CIW agreement.

“We are tired, as Martin Luther King Jr. said, of ‘relying on the good will and understanding of those who profit by exploiting us,’” a statement on the CIW website explains. If by the end of the tour, McDonald’s has not acquiesced to the workers’ demands, the group will pursue “more aggressive” measures, according to Benitez.

Bus tickets to Chicago are $85 roundtrip. To reserve a seat, email celeste@sfalliance.org. Interested individuals can help craft materials for the New York actions at the Change You Want to See Gallery at 84 Havemeyer in Williamsburg on Saturdays between noon and 4pm. To register for the New York conference, visit allianceforfairfood.org.