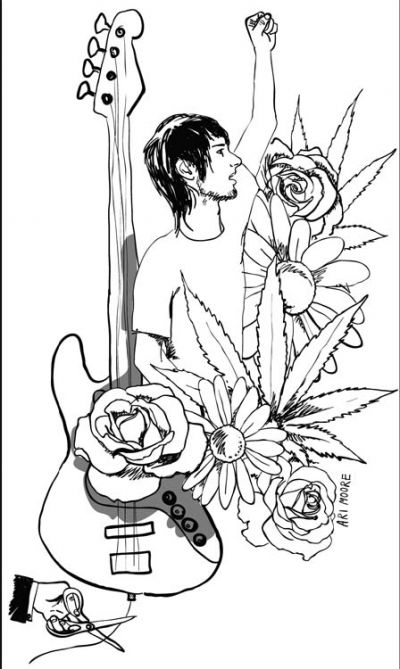 A few weeks ago I was in North Carolina, picking with an Appalachian-swing band called Cantankerous, sitting on their dulcimer/washtub player’s front porch on a sunny Sunday afternoon plucking my acoustic bass. It was beautiful. Staring up at the sky and the Blue Ridge Mountains, passing through the woods with the trees and the trillium and bloodroot just beginning to bud, stopping by a waterfall and facing a giant wall of rock that could be 450 million years old – it’s easy to see why people believe in magic, their awe in the presence of things and processes far bigger and older than they can comprehend, the miraculous benevolence of the earth’s annual regeneration.

But like everything else on this planet, the rich are fucking it up. They’re gouging out the Blue Ridge mountainsides for luxury gated developments, each with an iron and brick portal announcing its name, signifying elite serenity and inaccessible wealth. Developments that could wash out when the rains come or the river floods, dumping their mud and debris on everyone below.

Cancer is the metaphorical disease of capitalism. Uncontrolled growth by a handful of cells with no regard for the health of the organism. When I look at the hordes of overpriced high-rises springing up in Chelsea and Long Island City, I don’t see prosperity, I see metastasizing tumors.

Tonic, the Lower East Side club that booked many of New York’s more experimental musicians, sat in the shadow of one of these towers, and it closed on April 14. It was supposed to submit to eviction at noon. Instead, a group of musicians who’d played there – some of whom had raised $100,000 to get the club a sound system and to keep it going after 9/11, and all angry that we were losing yet another music space to the “tsunami of rent increases” – staged a free protest concert. The cops shut it down around 4:30 pm, as people sang “Bread and Roses.” Guitarist Marc Ribot and violinist Rebecca Moore refused to leave and were arrested.

“Too many alternative art spaces have closed at this point, and they have closed too quietly, too complacently,” Moore wrote in a message to supporters. “New Yorkers simply cannot let real-estate developers dictate the entire cultural landscape and fate of this special, historic place.”

The protest was demanding that the city government provide an equivalent music space, centrally located and big enough to hold at least 200 people. Such municipal support is common in Europe, one organizer told me, as Europeans aren’t as submissive to market ideology or as fatalistic about its dominance.

How to create a socioeconomic environment that will sustain a music scene of quality, diversity, and opportunity is a complicated question. Low-rent capitalism – at the small-club and DIY -space level – can sometimes work, as musicians who can win a following through word of mouth are often more vital than those who can swing the right pedigree and esthetic buzzwords to get selected by cultural commissars. But large-scale capitalism, in which about the only musicians who can make a living are those promoted by corporations or patronized by the very rich, is a disaster.

From far more optimistic times comes John Sinclair’s recently reissued 1972 book, Guitar Army (Feral House). Sinclair, a Michigan Beat poet turned activist, was manager of the MC5, the most radical rock band of the 1960s – their sonic fury, working-class roots, and rebel stance directly prefigured punk-rock. He was also America’s most famous pot prisoner: Sentenced to 9.5 years in 1969 for giving two joints to an undercover cop, he was freed in late 1971 after John Lennon campaigned for his release. (For that, the Nixon administration tried to deport Lennon.)

Guitar Army is a mix of “street writings,” mostly stoned exhortations penned late at night after MC5 gigs and police confrontations, and prison writings. I loved it when I was a teenage radical rocker, but much of it has not aged well. “It’s so funny to hear people talking about ‘selling out’ and ‘co-optation’,” Sinclair wrote in “Rock’n’Roll Is a Weapon of Cultural Revolution,” “because now anybody who’s been opened up to the new universe just can’t go back to that other shit.” Well, it’s easy to see how someone caught up in a crowd chanting “POWER! POWER!” when the cops pulled the plug on the MC5 could believe that the energy of the music and its symbiotic culture were invincible, and culturally, it did bring some permanent transformations – but economically, exactly the opposite happened. Corporations exploited the hippie-era rock explosion to gain oligopolistic control of the music business. It’s much easier to pimp the simulacra of rebellion and pleasure than it is to sustain a genuine counterculture. The firm renting the space that used to be CBGB is called Rebel Rebel Realty.

The prison writings are more reflective. Sinclair contrasts the rise of heroin with the idealism of psychedelic culture; evaluates the pros and cons of working with sympathetic music-biz types; and even criticizes himself for “woofing” at the judge who sentenced him, for “acting out of a warped sense of ‘politics’ which said that it was ‘revolutionary’ to talk real bad and come on super-defiant” – something all too common in the circa-1970 left, and not exactly extinct in today’s movement. But deleted from this edition is “Free Our Sisters, Free Ourselves,” his critique of the sexism rampant in the rock and radical worlds. (“I’d come over in party mode,” an MC5 member’s ex-girlfriend once recalled, and the women in the band’s commune would “all be on their knees scrubbing the floor.”)

Ultimately, though, radical culture is about giving people a vision that blasts out of the mundanity of oppression, and that was what Guitar Army was about. If you want to understand what the revolution-in-the-air headiness of 1968-69 and the bitter cultural warfare of the Nixon years really felt like, you should read it. And as my friend Michael Simmons put it in his introduction to the revised edition: “Evil Incarnate is currently in power. It’s more urgent than ever that we fight back, as Malcolm X speechified over 40 years ago, by any means necessary. Hopefully, we’ll be more savvy this time.”