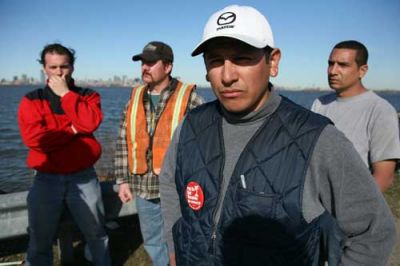 Longshoremen from Local 1588 in Bayonne, NJ hope that upcoming elections herald the end of Mafia domination of their union. Photo: Antrim Caskey

The longshoremen of Local 1588 in Bayonne, NJ knew their place – they worked and kept their mouths shut. When your past union president, an exboxer named John DiGilio, is found floating in the Hackensack River with two bullet holes in his head, you don’t ask too many questions. When the man who usurped the local from him threatens to settle disputes with a blowtorch to the crotch, you don’t go to the union office to voice concerns about benefits or safety issues.

“Every once in awhile you’d find out somebody got assassinated,” says Jorge Aguilar, who’s worked the docks for 19 years. “The [only copy of the] contract was kept in the union office and you didn’t want to ask for a copy.”

But that is all about to change, as a group of reformers is poised to take power in an April 19 local union election. Gone is the fear instilled by decades of Mafia domination in Local 1588 of the International Longshoremen’s Association (ILA), which was immortalized in Elia Kazan’s 1954 classic, On the Waterfront.

Since a government trusteeship was put in place four years ago to root out mob influence in the 450-member local, reformers have emerged from the shadows. “You see more democracy and folks are more willing to speak,” says Aguilar, who was elected shop steward by Local 1588 members last year. He’s now running for a vice-presidential post on the “Unity, Power, Respect” slate.

The reform slate is guaranteed to take power of the local, as it is running unopposed for all but one position. They plan to take office on May 1, International Workers’ Day. But lurking in the background is the Genovese crime family, believed by many law-enforcement officials to control the New Jersey docks and numerous union locals. While government prosecutors have convicted some Local 1588 officials of racketeering and forced out a number of alleged mobsters from the docks, others are scheming to make a comeback.

The reformers got an opening in 2003 when U.S. District Court Judge John Martin appointed former New York City Police Commissioner Robert McGuire to be the trustee of Local 1588. Martin called the local “a cesspool of union corruption” after two officials pled guilty to defrauding the local of at least $1.3 million in a mob-controlled scheme.

Judge Martin forced out John Timpanaro as president of Local 1588 for violating a decade-old consent decree prohibiting union officials from associating with mobsters. According to a 2005 Racketeer-Influenced and Corrupt Organizations (RICO) complaint, Timpanaro was accused of associating with the Genovese crime family and of being involved in a kickback-for-hire scandal. Sources at the local say Timpanaro demanded bribes of up to $15,000 for jobs or more hours on the docks.

“I tried to get in before. They [union officials] were very particular with who they let in,” said Manny Ferreras, whose father was a longshoreman. “They would let you in if they thought you’d be loyal to their crew.” Ferreras was finally hired under the trusteeship four years ago and now is part of the reform slate.

According to the 2005 RICO complaint against the parent body, the ILA, Timpanaro did the bidding of alleged Genovese associate Nicholas Furina, who in turn reported to reputed capo Larry Ricci. Feds say Ricci, who listed milkman as his occupation, was the Genoveses’ man on the New Jersey docks. Ricci allegedly defrauded the union’s health benefits fund with Newark Local 1235 President Al Cernadas and used Furina to intimidate 1588 members. Cernadas pled guilty to charges of fraud and conspiracy in September 2005.

Just weeks later, in October, Ricci disappeared while on trial for racketeering with two other ILA officers. Ricci was acquitted but it did him little good. His bullet-ridden body was found in November 2005 after a customer at a New Jersey diner complained about a “foul odor and a mass of flies swarming around the trunk of a car” in the parking lot. Ricci allegedly headed the crew of Local 1588 that controlled the Bayonne docks. Speculation is that the Genovese family ordered Ricci whacked. They wanted him to take the fall and plead guilty so as not to bring unwanted attention to the crime family during the trial.

On March 29, federal prosecutors linked Michael Coppola, also a reputed Genovese captain, to Ricci’s killing after he was recorded discussing the gun used in the murder. A familiar face on America’s Most Wanted, Coppola had been cuffed weeks earlier by police after being on the lam for more than a decade in connection with the murder of button man Johnny “Coca Cola” Lardiere in 1977.

According to a 2004 New Jersey state report on organized crime, Ricci took over a Jersey-based crew headed by alleged Genovese capo Tino Fiumara and an onthe-run Coppola. Gangland News described Fiumara as “a power on the New Jersey docks.” Fiumara, who was sprung from prison in 2005, is poised to become the next Genovese boss.

Though union reformers acknowledge the history of mob influence they vow to move beyond it.

“The past has been spoken about so much,” said the reformist slate’s presidential candidate, Anthony Falcicchio. Mob figures would still have to contend with the trustees, who will continue to monitor the local’s affairs for 18 months after the election.

Local 1588 members greeted the government trusteeship with suspicion at first, though most agree it kept the mob away and allowed reformers to emerge. Trustee Robert McGuire came to the docks bearing baggage as a former CEO of Pinkerton, Inc., a notorious security agency that has provided hired thugs to union-busting efforts for decades.

Nonetheless, rank-and-file longshoremen found space to organize. They agitated against the 2004 master contract negotiated by alleged mob associates in control of the 15,000-member ILA. The contract pitted worker against worker by instituting a multi-tier system within the international, reducing pay and benefits for all new hires. The reformers also gained traction by pushing job safety concerns and enforcement of seniority rights.

Tony Perlstein represents the new face of Local 1588. He is one of the leading union activists on the Bayonne docks and cochairs the dissident Longshore Workers Coalition – a group consisting of members from other East Coast ports organizing for union democracy.

“Given a free choice, our union [members] will do the right thing,” says South Carolina longshoreman Leonard Riley, who co-chairs the coalition. Riley exults that in Local 1588, “allegedly one of the most corrupt locals now is being lead by reformers.”

A former Teamster organizer and graduate of Brown University, Perlstein got a job when the trustees opened the ports to new hires. He connected 1588’s plight to longshoremen in Charleston, who fought a racist political climate to defend striking union members in the Charleston five case (see sidebar).

“If the union can take on the fights that the members care about it, it will be more difficult for them [the mob] to come back,” Perlstein said. Perlstein is running for treasurer on the reform slate.

Though New York tabloids recycle screaming “Last Don” headlines with every high-profile mafia-boss arrest, union reformers are ever cognizant that wise guys will not easily relinquish their stranglehold of the ports.

Adding to the concern, top ILA officials, including General Organizer Harold Daggett, beat the rap in the 2005 RICO trial and the feds’ case is now floundering. Daggett is flexing his muscles in the union as members of his Local 1804-1 did multiple job actions recently to protest working conditions.

“There’s been no basic change in the ILA leadership, and it has a record going back generations of racketeering domination,” commented Herman Benson, an elder statesman of union democracy movements and secretary-treasure of the Association for Union Democracy (AUD). Government trustees hired a key component of the local’s transformation in former AUD Executive Director Carl Biers. Biers serves as the Local 1588 education director.

Daggett could be up for the presidency of the ILA this summer at the international union’s convention. Also sure to come up at this summer’s convention is the ILA’s health benefits fund reserve, estimated in the hundreds of millions.

After projecting a health benefit fund deficit of hundreds of millions of dollars at the onset of the contract, the ILA recently reversed itself and said there will be a $600-million reserve by 2010. The stage is set for stevedore companies and ILA leadership to bargain over who gets a piece of the savings. Angry Local 1588 and workers in other ports have also experienced frustration when international leaders changed the benefits plan mid-contract. The changes raised copays and many doctors left the plan.

Employers have also flooded the ports with new hires that start at $16 per hour and must work at least 700 hours per year to qualify for benefits. Because the ports are so flooded with manpower and longshoremen are dissuaded from taking other jobs, many workers find it difficult to secure health care. ILA members balk at the mediocre compensation with the Port New York/New Jersey awash in $149 billion worth of cargo, shattering the previous year’s record.

Reformers in Local 1588 are also focused on day-to-day job safety issues at the Bayonne piers. “I’m a crane operator and my back is bent over for hours at a time,” Virgil Maldonado, a reform candidate for a vice president position, said.

While longshoremen rarely lift cargo as technology has transformed the piers through containerization, they describe the work as exhausting. It ranges from driving loaders to sitting high above the pier operating cranes, requiring workers to be hunched in vibrating machinery for excruciating double shifts.

The slate plans to survey the members over their concerns and possibly set up safety board.

“The real change begins when we get elected,” Ferreras said.