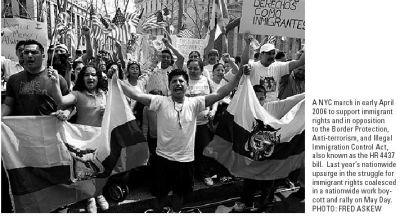 May Day is almost unknown in the United States, but it began here. It commemorates the movement for an eight-hour workday involving millions of Americans in the 1880s. Then, people had no right to overtime and like many workers today, most people received no health care or other benefits from their employers.

On May 1, 1886, tens of thousands of workers in Chicago and across the country held a one day general strike that turned into days of clashes between workers and police. May Day became the international holiday of working people, to commemorate the struggles of North Americans for economic justice. It is celebrated publicly in almost every country except the United States.

There are many parallels between the first May Day and today’s movement for justice. Like in 1886, the most exploited workers in America today are immigrants. Immigrants come to America for work because they are forced from their home nations by injustice, war, persecution and poverty, which is often linked to neoliberal global economic policies. Like today, politicians used fear of immigrants’ supposed differences from “normal Americans” to divide working people by language, national origin and culture.

Today, as in the past, immigrants to America are exploited and denied basic human rights. And, like the first May Day, the struggle of those immigrants to assert their rights is important for the rights of all people. The fight for immigrant rights in the United States is connected to hundreds of years of struggles spanning borders around the world. In the last year, we have continued mass mobilizations, student walk-outs, wildcat strikes, labor organizing and political pressure.

The workers’ struggle, celebrated on May Day, is intimately tied to a global fight for immigrant rights due to the consequences of capitalism, globalization, oppression and war. The freedom and dignity of all people must be advanced through solidarity amongst all those who work against injustice and racism.

—Modified from the 2006 pamphlet, “May Day and Beyond: The Radical Context of the Struggle for Immigrant Justice,” published by the North American No Border Network. More info: deletetheborder.org, noborder.org