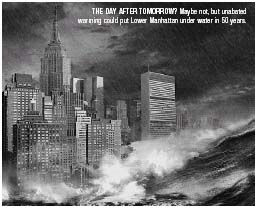 Looking down from the sky, it will appear as if the cold waters of the Hudson and East Rivers are flowing up and over the banks of lower Manhattan Island. That’s the visual image that the organizers of “Sea of People” hope to create on April 14 when thousands of people dressed in blue gather in Battery Park to make a point about the consequences of global warming.

Joining more than 1,100 actions in all 50 states for the Step It Up! Campaign on the National Day Against Climate Change, New York City organizers hope that this dramatic action will help convince Congress to cut global warming – causing pollution by 80 percent by 2050.

The Sea of People website states it bluntly: “New York City’s coastal location makes it particularly vulnerable to rising sea levels and more powerful storm events that will result from unabated warming … Permanent inundation could result, with the collapse of either the Greenland or Antarctic ice shelves, which would lead to a 10- to 20-foot rise in sea level. Such a rise would greatly reconfigure the map of our city, sinking much of lower Manhattan beneath the water.”

“The secret to keeping parts of New York from going under water in the next 50 years is in understanding ways we can lessen our impact, by preparing for the future and getting involved,” noted Sung Bin Park, one of the numerous Sea of People organizers.

More than 30 different events are being held in all five boroughs of New York City to bring home the message that urgent change is needed to curb carbon emissions in order to avoid large-scale catastrophe. From musicians in the subway and Central Park to a Bronx River Tribute, picnics in Queens and Park Slope to a Lower East Side Live Organic Vegan Experience (LOVE), New Yorkers hope not only to strengthen the national message to politicians, but also to build sustainable communities.

The Water Rising Flotilla action is looking for local paddlers, canoers and kayakers to create a mass of human powered vessels to cruise through the Gowanus Canal in Brooklyn. “This is a historic body of water that has been neglected by the community for 100 years and is one of the most polluted bodies of water in the city,” said Ludger K. Balan, executive director and founder of the Urban Divers Estuary Conservancy. “As a community completely surrounded by water, we also need to make sure that climate change makes it into policy governing new development along the canal.”

Time’s Up!, a local direct-action environmental group, is planning a bike ride following future sea levels along Manhattan Island as a way to highlight that non-polluting transportation is one part of the solution. They suggest participants dress as if they are biking under water.

The Step It Up! campaign aims to bring attention to global warming by holding actions at some of the most vulnerable places in the nation, including at melting mountaintop glaciers, under water near coral reefs in the Florida Keys, in farmlands and along the tidelines of coastal cities. “This is the America we want to defend against the massive change that would come with global warming – it’s the America we dearly love,” notes the group’s website, stepitup2007.org