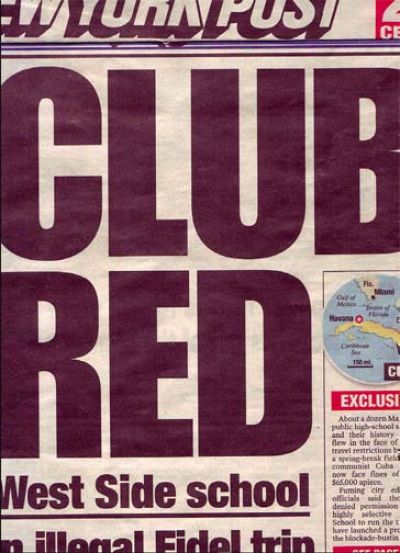 Who cares that a group of smart, idealistic Beacon High School students took a trip to Havana? Only the editors at the New York Post — who denounced it as a trip to “Club Red” — The New York Times, The New York Sun, the Associated Press, Fox News, dozens of local TV stations and small-town newspapers, 1010 WINS, and Investors Business Daily, along with rabidly anti-Castro members of Congress.

How did an innocuous class trip become front-page news and dominate the local media market for days? It’s more complex than simple anti-Castro sentiment. The students of Beacon High School and history teacher Nathan Turner are the latest casualties of a media war against the New York City public education system. The fact that the school implicated is Beacon — home of one of the city’s most distinctive, creative, and prestigious public education programs — only makes the tabloids salivate more.

The Post first reported the story on April 16, after spending most of the previous weekend camping outside Turner’s home. When the Times printed its followup on April 17, the story was legitimized, and the media feast was on. But the two major instigators have been the Post and the New York Sun, which have divided their ideological labors in covering local “left-wing” activity. The Post strikes the populist chord, while the Sun’s rhetoric wouldn’t have seemed out of place during the battles over Stalinism in the 1950s.

The initial Post article on the April 1-10 trip described Beacon as a “selective [school] on the Upper West Side, which for years has organized extravagant overseas trips with complementary semester-long classes.” “Selective school,” “extravagant,” and, especially, “Upper West Side” all serve as not-so-coded code words for that demon of the populist press, the “latte liberal.” The paper’s April 18 editorial raged at “a so-called alternative public high school that caters to the bright and the privileged,” claiming that such institutions “dote on teachers like Turner, who festoons his classroom walls with Che posters as he pines in public for a revolution that will never come.”

The Sun, meanwhile, used the contretemps to launch attacks on everyone from the El Puente Academy for Peace and Justice to the Khalil Gi-bran International Academy for the study of Arab language and culture in Park Slope to “left-wing” groups, such as ACORN and the Northwest Bronx Community and Clergy Coalition, who are involved in education- reform efforts. It warned of a “cadre of leftists and others caught in a time warp, promoting a 1960s type of radicalism … [and] doing it in the public schools.” The Sun’s editorial page later attacked the United Federation of Teachers for supposedly “defending” the trip, bizarrely noting that the UFT position was “shocking” for a labor leader “whose union has been part of the anti-communist wing of the American labor movement.”

“The case is also a challenge to Chancellor Klein and Mayor Bloomberg,” it concluded, in a passage straight out of the 1950s, “as to whether they are employing individuals to teach our children who are siding with the communists — or are indifferent to the dangers of communism — and who care little about obeying our laws.”

What the local attacks on Beacon and Nathan Turner have in common is a generalized rage at the city’s public education system, a rage that has been a feature of the city’s tabloid press for years. Whether that rage takes the form of diatribes launched at lazy teachers (or communist ones), “hoodlum” inner-city school students (or privileged ones from the Upper West Side), a teachers’ union unwilling to fire low-performing teachers (or unwilling to crack down on creative ones) the right continues its assault on educational institutions that have the audacity to promote creative thinking and a sense of intellectual wonder, and refuse to toe the bleak, stilted, black-andwhite party line of American conservatives.