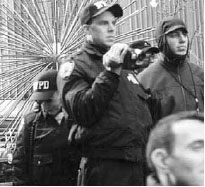 Despite efforts to mask its spying activity, the city has not just been videotaping demonstrators, but has also placed infiltrators in groups around the world in advance of the 2004 Republican National Convention, leaked documents show.

Meanwhile, in federal court, the city continues to defy the letter and the spirit of a landmark 1970s class action suit that imposed modest limits on its ability to monitor, influence or disrupt political activists.

Handschu v. Special Services Division was filed in 1971 after the acquittals of the Panther 21 revealed that the NYPD was engaged in dirty tricks similar to the FBI’s counter-intelligence program (COINTELPRO) and had amassed more than one million files on New Yorkers. In 1980, a federal decree prohibited police spying on First Amendment activities without a reasonable, articulable suspicion that a crime was about to occur. The 1980 settlement restricted police surveillance activities, created a “paper trail” to authorize investigations, and prohibited the dissemination of the information gathered.

Arguing that such limits are “unworkable in a time of terrorism,” the city sought to modify the consent decree in 2002. Language removed included the injunction against spying activity and semi-civilian control over when a political investigation could be launched, in effect removing the decree’s enforceability.

In 2003, it came to light that the NYPD had been compiling a Demonstration Debriefing Form every time a protester was arrested, cataloguing “organization name,” “position” and “prior demonstration history.” U.S. District Court Judge Charles Haight Jr. was not pleased, saying, “These recent events reveal an NYPD in some need of discipline.” Commissioners Ray Kelly and David Cohen claimed that they were unaware the form was being used and that they immediately destroyed that database.

As a result of the revelations, Judge Haight made the police incorporate written guidelines on investigations of First Amendment activity into the NYPD’s patrol guide.

The city next tried to unilaterally legalize videotape surveillance of demonstrations by issuing Rule 47 in September 2004. The indefatigable Handschu lawyers returned to court to enjoin the rule, pointing to three peaceful and permitted rallies that were videotaped by the police, including one by Coalition for the Homeless.

The City argued that videotaping was legal as long as the purpose wasn’t solely to investigate political activity. On Feb. 15, 2007, Judge Haight ruled that the NYPD may only videotape for legitimate law enforcement purposes. Calling the homeless demonstration “quintessential political activity,” he said police videotaping of it was an “egregious” violation of the guidelines and “any future use by the NYPD of video and photographic equipment during the course of an investigation involving political activity without compliance with the guidelines’ protocol could form the basis for a contempt proceeding.”

The city has asked the judge to “vacate, amend, alter and/or reconsider” his Feb. 15 order. A public hearing on the city’s motion will be held April 11, 2 p.m. at 500 Pearl Street in Judge Haight’s courtroom.