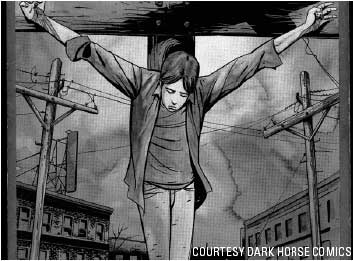 Faith resurged in the wake of 9/11. Since then it’s posited as a ubiquitous aspect of American life, turning laymen to legends. Mark Millar and Peter Gross explore this theme with skill and intelligence in Chosen, by turning a legend into an everyman.

While preparing for a fateful trip to Israel, 33 year-old Jodie Christianson retells his coming of age to a group of adoring followers. Like countless 12 year-old boys, Jodie enjoys video games, smokes weed, and easily drops curses. But it isn’t until he emerges unscathed from a truck accident that his destiny begins to materialize. With a hint from a hospital attendant, Christianson reenters his suburban American world dimly aware of his awesome powers, sparking the town’s curiosity.

Before long, Jodie’s miraculous cures and exploits catch the attention of skeptical adults and a faithless priest. His distant mother points to the book of Revelations as a blueprint of his destiny as the residents of Peoria, Illinois rush to embrace their Lord’s second coming. He accepts his new role with only a vague notion of what lies ahead. Millar and Gross offer a wholly different vision from the sleek, leather-clad, Wachowskian messiah.

Although their premise is novel, the story is anything but. Smart, funny and anchored in fully developed characters, Chosen is a radical and unflinching look at people’s reliance on faith. Gross’ simple compositions and camera angles invite us to find ourselves in the characters and situations. Jeanne McGee’s watercolors give the town a soft vitality that illuminates its residents.

Millar and Gross’ Chosen stands up to its comparison with Garth Ennis’ acclaimed and controversial series Preacher. Published by Dark Horse Comics — one of the biggest independent comic publishers — Chosen reaffirms the belief that just about anything can be done with comics.