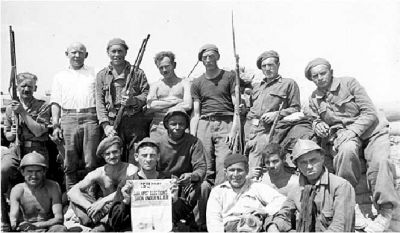 FACING FASCISM: New york and the Spanish Civil War
The Museum of the City of New York,
through August 12

When workers and peasants in Spain united in 1936 to defend a progressive, democratic government from a rebellion led by General Francisco Franco, the Spanish Civil War was on. It was left vs. right as socialists, communists and anarchists squared off against fascist forces that received military support from Nazi Germany and Mussolini’s Italy. The Western democracies stood by while the Soviet Union sent aid and advisors to the Republic.

For leftists, Spain was the front line in the struggle to turn back the fascist menace that, in a few years, would plunge the world into an unprecedented global conflict. Thirty-five thousand international volunteers traveled to Spain to battle against fascism, including 1,000 New yorkers who joined the 2,600-member Abraham Lincoln Brigade.

A new exhibit, “Facing Fascism: New york and the Spanish Civil War” at the Museum of the City of New york, commemorates the actions of these New yorkers in an austere, compact, yet vivid and dramatic manner.

The exhibit displays a grand objectivity and comprehensiveness in its presentation of archival materials that record the Spanish tragedy. Those materials include many rare items — posters and photographs, paintings and sculpture, uniforms and arms, letters and telegrams, films and literary works. It is an altogether affecting assemblage, bringing forth an emotional response — sadness, despair, anger — leading where?

Following almost three years of brutal fighting that included the first-ever mass aerial bombardment of cities and that killed upwards of a half million people, Franco triumphed in March 1939; five months later, World War II broke out. About onethird of the Lincoln Brigade died in Spain. “A lot of people there said goodbye to us,” one volunteer recalls.

An exercise in historical authenticity, the exhibit centers on the reaction of Americans, particularly New yorkers — among them students, labor union members, activists, medical personnel, writers, actors, dancers and artists — to the Spanish predicament.

Political differences are addressed:
isolationism versus intervention, opposition to the U.S. Neutrality Act, and the points of view of liberals, communists, anarchists, conservatives and anti-Communists. In the August 1937 issue of Vanguard, for example, anarchists expressed both antifascist and anti-Communist views.
The arrangement of materials is thematic — Crisis in Spain, Joining the Cause, Passage to Spain, At the Front — with items shown in boxlike display cases fixed to the gallery walls at eye level and in a series of columnar cases, like marching men. Each item in the exhibit carries an understanding of the events that occurred in Spain. James Lardner, son of the American writer Ring Lardner, wrote to his mother on May 3, 1938, that he had joined the Abraham Lincoln Brigade “because I believe that fascism is wrong … because I am tired of working for the [New York] Herald-Tribune and newspapers in general.” Jim Lardner died in action a short time later.

There are film clips of street crowds and ruins, advancing troops, artillery barrages, planes overhead. There is the front page of the New York Post, Nov. 9, 1936: “MADRID HOLDS FAST UNDER SAVAGE ATTACK.” There is Robert Capa’s renowned 1936 photograph, “Death of a Loyalist Soldier.” Capa was later killed covering the Vietnam War. There is the playbill and a photo from the Broadway presentation of The Fifth Column by Ernest Hemingway in 1940. Hemingway wrote the play while a correspondent in Spain in 1937. There is a showing of a film, New York Voices, of aging Lincoln Brigade veterans.

A woman who served as a nurse declares, “We learned in Spain how to act, instead of just talk.” World War II followed the Spanish catastrophe and ended inconclusively. The Atomic Age, the Cold War, the Palestine-Israel conflict, the Korean War, U.S. subversive actions in Latin America, the Vietnam War, the first Gulf War, the Iraq and Afghanistan Wars have marked the post-World War II decades with death and destruction. The U.S. and the world have learned nothing from the past.

Tues., June 5, 6:30 p.m. the Artist and Intellectual in a time of Political conflict