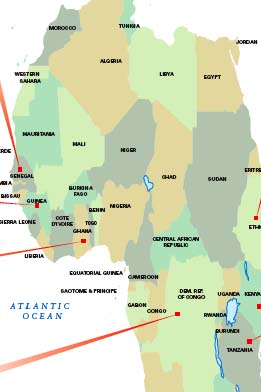 By Ann Schneider and John Tarleton

Pan-Africanism is both a philosophy and a political movement that emphasizes the emancipation and uplift of all African peoples. The movement’s roots can be found in the early 20th Century in the African diaspora in the U.S. and West Caribbean. Early leaders included Marcus Garvey, Henry S. Williams and Martin R. Delany. The movement gained renewed momentum in 1945 at the Fifth Pan-African Convention convened in Manchester, England, by the writer W.E.B. Du Bois and attended by a number of leading figures in the anti-colonial struggle including Kwame Nkrumah, Jomo Kenyatta and George Padmore.

With Europe exhausted by war and tens of millions killed in the struggle to defeat the Nazis and their racist ideology, the Western colonial regimes in Africa could no longer be sustained or justified. The following decades would see revolutionary movements take power in one new African nation after another. For many, the vision of a united Africa was a driving force. A number of factors–including extreme poverty, political instability, lack of shared infrastructure and the continent’s vast size–have worked against the realization of the Pan-African dream. Still, for many, the ideals encoded in the early Pan-African movement represent a touchstone to refer to when striving to create a more just and egalitarian society. This rich history is commemorated on May 25th, African Liberation Day, marking the day the Organization of African Unity was founded in 1963 in Addis Ababa, Ethiopia.

SÉKOU TOURÉ
Guinea
After Guinea voted for total independence in 1958, the French withdrew, cutting off aid and taking with them every piece of equipment, down to the lightbulbs. Sékou Touré, the most audacious of the Pan-Africanists, went as far as to change the currency in 1960 without notifying the French, who lost their large profits from Guinea’s bauxite mines.

Touré promoted participatory economic planning, the use of tribal languages, and revival of popular crafts and artforms. He extended asylum to Miriam Makeba, Stokely Carmichael and Kwame Nkrumah.

Toure’s legacy lives on in present-day Guinea where trade unionists are demanding President Lansana Conte step down so that Guineans, the poorest people in the world, can end the trade concessions going to mining giants Alcoa, Reynolds and DeBeers.

KWAME NKRUMAH
Ghana
Inspired by the Pan-Africanist teachings of Marcus Garvey, W.E.B. DuBois and others he encountered during his time as a student in the U.S. in the 1930s and 1940s, Kwame Nkrumah returned to his native Ghana in 1947 and quickly built a mass-based civil disobedience movement that pushed the British to grant greater and greater self-rule to the Gold Coast, as the colony was then called. In 1957, Ghana became the first African nation to win its independence. In his welcoming address at the All-African People’s Conference held in Ghana in December 1958, Nkrumah said, “Fellow African Freedom Fighters still carrying the burden of imperialism, pull together. We who have won our freedom stand uncompromisingly behind you in your struggle. Take heart. Unite your forces. Organization and discipline shall command your victory. All Africa shall be free in this, our lifetime.”

A leading advocate of a “United States of Africa,” Nkrumah feared what would happen if the continent’s newly emerging nations remained small and fragmented. “There is a tide in the affairs of every people when the moment strikes for political action,” he wrote in 1961. “Such was the moment in the history of the United States of America when the Founding Fathers saw beyond the petty wranglings of the separate states and created a Union. This is our chance. We must act now. Tomorrow may be too late and the opportunity will have passed, and with it the hope of free Africa’s survival.”

Nkrumah was overthrown in a CIA-backed coup in 1966 and died in exile in Guinea in 1972 where Sékou Touré had named him honorary “co-president.”

PATRICE LUMUMBA
Congo
Patrice Lumumba founded the National Congolese Movement (MNC) after being released from jail in 1956. His Pan-African beliefs were deepened after attending the All-African People’s Conference in Ghana in 1958. He was elected the first prime minister of the newly independent Congo in 1960 but was deposed after only 67 days by Belgian army officers who had tried to keep the independence movement from coming to power. When Belgium instigated the secession of the mineral-rich Katanga province, Lumumba sought help from the United States. The US refused to help, thereby forcing him into a closer alliance with the USSR. Lumumba was beaten and shot on Jan. 17, 1961 and his remains later destroyed by sulfuric acid. Belgium has apologized for its role in his assassination and said it was done in cooperation with the CIA. Lumumba continues to be a revered figure in contemporary Conglolese politics. Several political parties invoked his name and teachings in the 2006 elections and Lumumba’s former deputy Antoine Gizenga was named Prime Minister in December.

AGOSTINHO NETO
Angola
A poet and a doctor by training, Agostinho Neto became Angola’s first president when Portugese control collapsed in November 1975. Neto’s Marxist party was able to outmaneuver opponents back by the U.S. and South Africa with the help of 30,000 troops airlifted from Cuba, itself a country of majority African descent. Cuban forces would later defeat South African forces at the decisive Battle of Cuito Cuanavale (TK) in southern Angola in 1988. This paved the way for the negotiated withdrawal of South Africa from neighboring South West Africa (now Namibia) and the eventual rollback of the South African regime.

LEOPOLD SEDAR SENGHOR
Senegal
Poet, politican and Senegal’s first president from 1960-1980, Leopold Senghor defended and promoted the cultural heritage of Africans, developing the idea of négritude to refer to the distinctive culture shared, he believed, by Africans and all members of the African diaspora.

Senghor believed that the people of Africa should be proud of their négritude, develop it, express it, and offer it to the world as part of the universal human heritage. Africa, he also believed, could adopt socialist planning and technology, build on its own community-based principles, and create an African socialism in keeping with African strengths and traditions. Senghor helped found the Organization of African States (OAS) in 1963 and in 1966 hosted the First World Festival of Negro Arts in Dakar, an event that attracted 10,000 visitors from around the world. In 1980, he became the first post-independence leader in Africa to leave office voluntarily.

HAILE SELASSIE
Ethiopia
Emperor of Ethiopia Haile Selassie fought off a 1935 invasion by Mussolini until the Italians’ use of chemical weapons forced him into exile until 1941. Worshiped by Rastafarians, his 1963 speech to the United Nations was immortalized by Bob Marley: “Until the philosophy which holds one race superior to another is finally eradicated, until that day, the dream of lasting peace and world citizenship and the rule of international morality will remain but a fleeting illusion, to be pursued but never attained.” Selassie was overthrown by rebel Army officers in 1974 and subsequently died in their custody.

JOMO KENYATTA
Kenya
Jomo Kenyatta co-founded the Pan-African Federation in 1946 with Kwame Nkrumah and became a leading anti-colonial activist in Kenya during the early 1950s. He was sentenced to seven years hard labor following the outbreak of the Mau Mau Rebellion (1953-56), which was led by local Kikuyu farmers looking to recover lush farmlands from British settlers. Taking a blood oath and denying themselves female relations, the Mau Mau retreated to the hills of Mount Kenya where, lacking gunpowder, they were bombed into submission. More than 20,000 were killed. Nonetheless, calls for independence would continue to grow following the defeat of the Mau Mau. Kenyatta was freed in 1961 and became the first president of the newly independent Kenya in 1963. Kenyatta charted a conciliatory, pro-Western course, agreeing that the Kenyans would purchase land back from the British at a price set in pounds sterling.

DR. JULIUS NYERERE
Tanzania
Widely respected for his integrity and selflessness, Dr. Julius Nyerere led Tanzania (formerly the colonies of Tanganyika and Zanzibar) to independence without war or bloodshed and became the new nation’s first president in 1964. Nyerere advocated an African socialism rooted in the ujamaa, the traditional extended family found in rural Africa. Due to his emphasis on national over tribal identity, Tanzania has been free from the political strife and instability that has plagued many African nations. Tanzania also provided refuge and support for liberation movements in Mozambique, southern Rhodesia (now Zimbabwe) and South Africa. When some of his collectivist policies faltered, Nyerere publicly rebuked himself in 1977 and changed course. He stepped down from the presidency in 1985.

SAMORA MACHEL
Mozambique
Founded as a Portugese slave colony in the late 1400s, Mozambique gained independence in June 1975 following a 15-year liberation struggle championed by FRELIMO and its charismatic leader Samora Machel. Upon becoming Mozambique’s first president, Machel nationalized the properties of the former colonists, poured scarce resources into schools and health clinics, and provided refuge and support for black liberation fighters from neighboring South Africa and Rhodesia. South Africa’s apartheid regime in turn supported rebels who laid waste to much of rural Mozambique, forcing Machel to sign a peace accord with South Africa in 1984. Machel was killed two years later in a mysterious plane crash near the Mozambique-South Africa border.