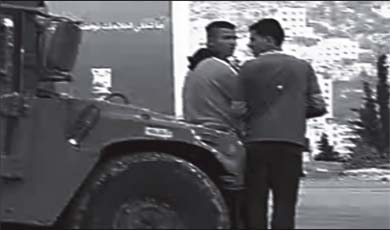 YouTube, MySpace, and Google are eating our brains. Capital has innovated these tools to gentrify our interior spaces much as it converts our common spaces into dead zones full of shopping/eating/working zombies. Can activist media makers use these tools while establishing community relationships on their own terms? AFilms, an anarchist group working in the occupied Palestinian territories, is making an effort to navigate this rocky terrain.

On April 12, A-Films posted a video on their YouTube page titled “Nablus: Kids Used as Human Shields in Balata Refugee Camp,” which was cross posted on Electronic Intifada and NYC Indymedia, among other sites. The video shows footage of heavily armed Israeli Occupation Force (IOF) soldiers moving through the streets and alleyways of the West Bank refugee camp. Bulldozers pull down walls of homes; there is rubble everywhere in a landscape scarred from repeated construction and destruction. IOF soldiers force two young Palestinians to stand in front of their vehicle as a protective shield. A voice yells at the soldiers, one of whom tries to respond. Then the door of the armored vehicle closes.

Though parts of this video are valuable as evidence of human rights and criminal violations, what is unique is the attempt to create images of the occupied territories that respect complexity and nuance. AFilms is willing to document quiet spaces and to allow for slowness, drawing attention to the underlying structures that are usually hard to see in speedy and noisy documentation. The crisis experienced by the Palestinians is not characterized by sporadic “inappropriate” actions taken by the Israeli government, but by a set of social relationships that manifest themselves continually.

A rock comes crashing down on the hood of an IOF humvee. Visual poetry: the debris generated by Israeli bulldozers as they demolish homes and lives is thrown back into play by the inhabitants of those very same buildings. Architecture is adapted for military purposes. The human barrier built by the IOF soldiers is evidence of human beings being absorbed into and utilized by the machinery of oppression. In AFilms’ work, individual events aren’t stopping points, but indicators that much of this crisis is hidden and repressed, and they challenge viewers to reconstruct the history.

A-Films show that it is possible to document Israeli military actions in the West Bank without revictimizing Palestinians on a symbolic level. This does not mean, however, that this body of work escapes the need to engage politically with the ideas it finds itself thrown Rebuilding Palestine with Video up against. In the end this video may too easily satisfy the demands of effective human rights reporting: the quietness and lack of narration are also a disengagement from the ideas and arguments that surround this crisis. It should be possible to create space for imagination and to articulate an argument.

This is important for both media makers and consumers because the parameters for the appropriate response to violent repression should be written by Palestinians, not for them. At present, the growing industry of American organizations that “monitor” crisis situations around the globe, ostensibly to alert the concerned but over-saturated American public of catastrophes in progress, largely sets the requirements for videos of this type, requirements that are, at the least, in need of examination. Questions still remain as to how media can communicate politics effectively and quickly.

This video is available at: youtube.com/ watch?v=tomdEkOgdKU. George Leonard manages the video page for themire.org. This column highlights activist videos and explores the way media is used to inform and organize our movements.