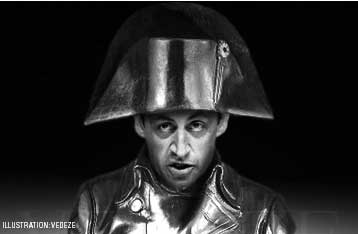 PARIS — France is suffering from a “malaise.” almost all French say they are dissatisfied with the political, economic and social situation in which they live, but their reasons differ vastly. The deciding question in the recent presidential election seems to be whether “neoliberal reforms” — economic deregulation, privatization and rolling back the welfare state — are understood to be the cure or cause of the “malaise.”

Right-wing candidate nicolas Sarkozy won the presidency on May 6 with 53 percent of the vote by campaigning on the platform that France must break with its past. The argument is that in order to overcome economic stagnation, thus reducing unemployment and re-injecting vitality into the flagging spirits of the French, government spending must be reduced, taxes cut and the labor made more flexible. It’s a call for assaulting France’s hard-won social safety net, but this neoliberal model is also precisely the reason why so many French citizens feel insecure and disenfranchised.

Sarkozy’s tough talk about cleaning up the economy resonates among his supporters because it recalls his strongman rhetoric of two years ago when he promised to “power-wash” the suburban projects (home to many French of african and arabic descent) to rid them of “scum.”

France’s historical desire for a Bonaparte has been projected onto Sarkozy. For many, economic issues are inseparable from issues of immigration and race: France, they say, is losing its national glory because its overly generous welfare system is economically unsustainable, as it goes to the unemployed and minorities.

Sarkozy’s campaign slogan, to serve “the France that gets up early and goes to work,” was aimed at the working poor and intended to divide them against the unemployed. even when there is no explicit racism, France’s nationalist sentiment has many feeling shame that the economy is not growing as quickly as those of its neighbors. Blairism is rampant and an envious eye is turned toward Bush’s america, though without affinity for the man himself.

The diagnosis: France is stuck in the past due to its dead weight in the public sector and to backward-looking leftists who are in denial that the welfare state is broken, so a radical break is needed.

However, as former minister of the Interior and head of the police, Sarkozy was responsible for harsh policing tactics, surveillance and prison sentences, so he knows that his “break with the past” may be violent, and that it will not be easy to heal the “malaise.”

In just four days after his election, more than 1,200 vehicles were torched and the police arrested at least 1,000 people. This wave of protest echoes the suburban uprisings of 2005. many high schools and universities are convening general assemblies to contest Sarkozy’s project and his promised assault on the university system. The unions are preparing their counterattack against his proposed strike-breaking measure, which would provide a “minimum service” during transport stoppages.

Sarkozy’s mandate shows, ironically, that the French left is not dead, as was proclaimed when his opponent Ségolène Royal admitted defeat, and it will show this fact much more clearly than a Royal government would have.

In many ways, the Socialist platform, such as its immigration plank, did not differ significantly from Sarkozy’s, although it was vague and less aggressive. Royal preached “growth” and “competitiveness” as a cureall and promised to reduce public spending. She rushed to the right-chasing “centrist” voters, the many middle class French who feel the “malaise” but are unsure if neoliberal “reforms” are the cure or the cause.

While Sarkozy’s policies recall those of Reagan and Thatcher, the closest parallel is found in the frontal attack on the German welfare state started by the Social Democrats in 2002 and continued by the current left-right coalition of angela merkel.

The French elite have been eyeing the export-driven German economy jealously since it began to grow again in 2006. Of course, high demand from asia, as well as German economic colonization of eastern europe, account for much of Germany’s GnP growth of 2.5 percent last year.

France will have a hard time copying Germany no matter what “tough measures” it undertakes. Sarkozy’s cabal is likely aware of this, but is still planning similar budgetcutting, corporate-friendly measures. In Germany, pension and unemployment benefits have been slashed. The retirement age has been raised to 67, corporate and capital gains taxes have been cut and millionaires are multiplying. Sales tax has been raised to make up the difference. Child poverty has doubled since 2005.

A flexible work contract allows for the creation of short-term, part-time and insecure “mini-jobs” to compensate for massive layoffs due to outsourcing, contributing to record corporate profits. unemployment has fallen marginally but job insecurity has risen, contributing to a larger class of the working poor.

According to a poll published in December in Stern magazine, 82 percent of the German population feel that “no consideration is given to the interests of the people.” The same poll showed that 47 percent of the population believe that “elections are incapable of bringing about political change.”

The promised reforms in France can be expected to also result in discontent. Given the French penchant for filling the streets, the “malaise” is likely to turn into greater mobilizations than Germany has seen, as the confusion dissipates about whether such reforms are in the interest of the middle class.

Writing in Les Echos on may 9, the French equivalent of the Wall Street Journal, Stephen Richter commented on Germany’s dismantling of its social services: “If this effort toward mastering spending had begun by a conservative government and not a redgreen coalition [that of Schroeder in 2002], it would have translated into significant social unrest. France does not have this luck. It’s to the conservatives that the hard task falls, that of making severe cuts in the country’s social advantages, with all the political convulsions that that may entail.”

The French elite are quite aware of the unrest that France has seen in the past three years, and know, contrary to many leftists themselves, that there is a strong and lively, though confused and disorganized, French left.
Illustration: Vedeze