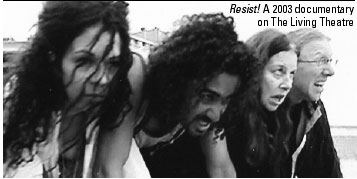 Judith Malina can list a number of things she thinks the world could do without: national borders, violence, prisons, government. Throughout her years directing The Living Theatre, the legendary playhouse she co-founded in 1947 (and which reopened late in April), Malina has been forced to deal with these “authoritarian systems” firsthand.

There was the arrest in Brazil and the trial for tax evasion — and the September 11th attacks that struck her hometown, provoking an authoritarian shift in Bush Administration policies. Now, after decades roaming Italy, Korea and elsewhere, the mother of the off-off-Broadway movement is back in Manhattan, fueling a revolution.

It’s called “the beautiful nonviolent anarchist revolution,” Malina said with a feistiness that belied her 80 years of age. She still has boxes to unpack in her apartment above The Living Theatre’s new home on Clinton Street, but the theater itself — a tiny, spare basement space fitted with rows of metal folding chairs — is already buzzing with energy.

Actors waiting to rehearse The Brig, a drama about the cruelties of military prison, applauded as Malina entered the building one afternoon, showing respect for the woman who once brought works by Allen Ginsberg and William Carlos Williams to the stage.

Though the early Manhattan performing spaces of The Living Theatre were repeatedly shut down (by the Fire Department in 1953, the Buildings Department in 1956 and the IRS in 1963), Malina’s drive to spread freedom around the globe kept the theater alive.

When she learned that the Medici regime had banned theaters from operating in Brazil, Malina snuck The Living Theatre into South America. She managed to outsmart the Brazilian police for two years, staging radical performances in favelas and on street corners, some of which drew thousands of onlookers, before she was arrested along with her late husband, and The Living Theatre co-founder, Julian Beck.

Quickly bouncing back, the couple proved that their revolution wouldn’t be easy to squash: In Lebanon years later, Malina wound up in a jailhouse again — this time to direct a show about abuses suffered by former inmates.

While Malina admits that theater alone cannot topple entire regimes, she speaks about revolution with a determination that suggests she was born to do exactly that. She cites her father, an Orthodox rabbi who came to new york fleeing persecution in Europe, as a major political influence. “I’m a German Jew!” she exclaimed when asked about her entry into radical politics, as if an affinity for anarchy somehow runs in her genes.