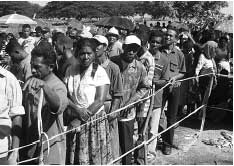 Despite the successful poll, the nation of 1 million is struggling to build stability. It has been dealing with a crisis that exploded in April 2006. according to some international observers, allegations of discrimination by soldiers grew into a political crisis. Protests became increasingly violent as gangs of youth joined in, resulting in dozens of deaths, the displacement of more than 100,000 people and hundreds of burned houses in the capital city, Dili.

Ramos-Horta called for limited regulation of businesses and foreign investment, while Lu Olo, a former guerilla fighter, ran on a more nationalist platform. The crisis was a factor in the elections, with many Timorese holding Fretilin responsible. many argue that mass poverty, a culture of impunity and high unemployment are the underlying factors.

Located almost 300 miles north of Australia, the eastern half of Timor was invaded by Indonesia in 1975, which resulted in more than 100,000 Timorese deaths. In a U.N.-sponsored referendum in 1999, 78.5 percent of Timorese voted for independence. In response, the Indonesian military and its militias pulverized the nation, killing 1,400 people, displacing three-quarters of the population and destroying most infrastructure. although some senior Indonesian officials have been indicted in Timor for crimes against humanity, no major figure has been held accountable. The nation depends on foreign aid, and international financial institutions have shaped responses to the nation’s ills, including rural poverty and 40 percent of urban youth facing unemployment.

Institutions like the World Bank, the International monetary Fund and the Asian Development Bank have pushed economic liberalization and privatization. an export economy has also been pushed by the World Bank. Timor’s dependence on food imports became clear during a recent rice shortage, which resulted in riots.

Offshore oil drilling will produce the vast majority of Timor’s government revenue for coming decades. much of Timor’s potential petroleum has been claimed by Australia in a treaty between the two countries, but international law notes that oil reserves lie in Timor’s territory.

More than a thousand U.N. police units and Australian soldiers have come to Timor as a result of the recent crisis. Australia refuses to put its International Security Forces under U.N. control, raising questions about its motives and accountability to the Timorese. When tragic incidents occur, such as the killing of two refugees on Feb. 23 by Australian soldiers, Timorese anger at Australia only increases. A shift in political power could come during the parliamentary elections on June 30. How the Timorese respond depends on perceptions about both the political campaigning and the election process. until Timor’s underlying problems are dealt with, however, peace will continue to be tenuous.

Craig Hughes observed the first round of Timor-Leste’s presidential elections on April 9 as part of the Solidarity Observer Mission for East Timor (SOMET). Timorese wait in line to vote for president in Dili, the capital of Timor-leste, on April 9. PHOTO: JORGE MEIER/SOMET