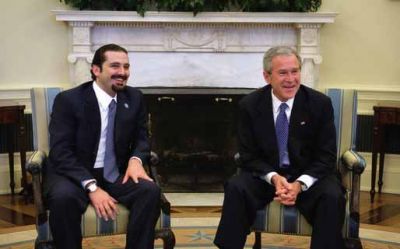 BEIRUT, Lebanon—Just over a month ago, a little-known group by the name of Fatah Islam clashed openly with the Lebanese army, killing 33 soldiers in the first day alone. The fighting continues to this day in northern Lebanon around the Palestinian refugee camp of Nahr el-Bared where Fatah Islam had been building up a fighting force of several hundred over the past year. Although there has been much speculation about the origins of Fatah Islam and who exactly is funding and directing them, the circumstances of their rapid emergence remain murky.

We first heard of Fatah Islam last November when a small group by that name split from a Palestinian organization with pro-Syrian leanings called Fatah Intifada.

Since then, they seem to have quietly gathered forces more or less along Al Qaedatype politics in northern Lebanon, particularly in Tripoli and Nahr el-Bared, where many ready recruits were available. Tripoli and its surrounding areas have long been a bastion of Sunni Islamists groups. Since the U.S. invasion of Afghanistan and Iraq, Islamist activism intensified in the north and in some Palestinian refugee camps like Ein el-Hilweh in the southern city of Sidon.

The growth of Fatah Islam was due to numerous reasons. There was, of course, the Iraqi invasion and bloody occupation which provided not only the ideological fuel but also hardened fighters who recently fought with the Sunni insurgency there. They also most certainly received monetary support and a blind eye from the Lebanese authorities, particularly from the Sunni Future movement dominated by the Hariri family.

Although the Hariris and their allies are very cozy with Washington, they needed the support of Sunni Islamists to get elected and the militants among them as a bulwark against the powerful Shia Muslim Hizbullah movement. No doubt the general polarization taking place along sectarian lines in Lebanon was also a contributing factor.

After the assassination of Rafik Hariri and the exit of the Syrian army from Lebanon two years ago, there has been an intense and often sectarian jockeying for power in Lebanon between two main camps, one led by the Future movement (often referred to as the March 14 coalition) and the other by Hizbullah (now called the opposition since it left the government).

Each side accuses the other of being the tool of regional and international interests with the Unites States, France and Saudi Arabia backing March 14 while Syria and Iran support the opposition. Even though Saad Hariri (Rafik’s son) at least indirectly funded Fatah Islam and perhaps other such groups elsewhere and no doubt has created a political atmosphere for them to grow in, the March 14 forces are blaming the whole affair on their arch-enemy Syria and its Lebanese allies.

The opposition and particularly Hizbullah are extremely worried about what is happening in the north. Their fear is that Fatah Islam is being used to draw the army into an endless confrontation to both test the army’s loyalty to the government and perhaps turn it at some later stage against the opposition. In recent tensions, the Lebanese army has maintained a scrupulously neutral position between the two sides and is credited with being the only political institution that is holding the country together. No doubt the eight planeloads of weapons and ammunition the United States rushed to the Lebanese army only confirmed the opposition’s worst suspicions.

Where this conspiracy will end is unclear. Some are suggesting that the next step is to turn the army against the Palestinian camps, which it has been prohibited from entering since 1969. Although Fatah Islam is closer to Al Qaeda in ideology and organization and seems to have few Palestinian members, the fact that they used the camp as a base has made Lebanese suspicious of all the camps and their Palestinian residents as well.

If the army can be induced to fight the Palestinians in order disarm the camps, the theory goes, then why can’t it be used to disarm Hizbullah? This is certainly a long shot and would take years to carry out, but that does not rule out that anti-Hizbullah fanatics both here and in Washington are not plotting along these lines.

Washington has exhausted all possible means, from U.N. resolutions to unleashing the Israeli military last July, in order to put an end to Hizbullah and has failed repeatedly. The current fighting could very well be a means to open an internal front on Hizbullah. In Lebanon, nothing can be ruled out and the truth rarely sees the light.