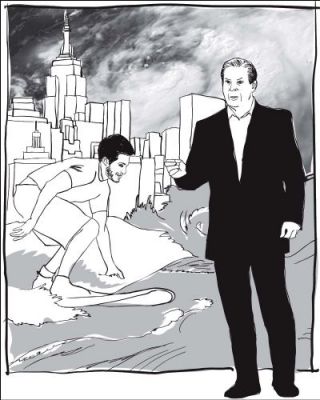 In one of the more effective scenes in Davis Guggenheim’s 2006 global warming documentary An Inconvenient Truth, former vice-president Al Gore shows a map of Lower Manhattan flooded with water from rising sea levels, from the melting of polar ice caps. In one of the least effective scenes in Roland Emmerich’s 2004 global warming wannabe-blockbuster, The Day After Tomorrow, a giant CGI tidal wave, also brought on by melting polar ice caps, slams into Manhattan, drowning thousands of extras, but unfortunately sparing Jake Gyllenhaal.

Both scenes rely heavily on our shared visual memory of disaster movies, specifically the popular “wall of rushing water” image that has been a mainstay of the genre from The Poseidon Adventure in the 1970s up through Titanic in the 1990s. But examining them side-by-side proves instructive as to why the mainstream considers one a masterpiece and the other a blockheaded failure.

Rather obviously, the scene in The Day After Tomorrow is ridiculous because it actually is a scene in a disaster movie. Stuck in the routine of a thoroughly played-out genre that wasn’t so bright to begin with, Emmerich sacrifices any argument his film may offer about climate change to the gods of Hollywood mass destruction. The film makes this clear in its opening sequence, where climatologist Dennis Quaid finds himself going from a scene in a National Geographic film to Sylvester Stallone’s Cliffhanger, as he nearly plunges to his death through cracking ice shelves. The film’s antiquated idiocy reflects a sensibility completely ignorant of how the images from the morning of 9/11 permanently changed our perspective on disaster movies. This seems especially, insultingly ironic in light of how the towers falling seemed to echo, for so many, the images of the exploding White House in Emmerich’s own blockbuster Independence Day.

Of course, referencing the images from 9/11 is a key touchstone for how Guggenheim and Gore succeed with their rushing water scene; his map of Lower Manhattan zooms in to show the World Trade Center Memorial, Gore pauses dramatically, before showing how climate change will potentially bring death and disaster to this area once again. A near-perfect counterpoint to the absurdity of its Hollywood twin, this scene carries a subtle horror carefully framed by both Gore’s calm, authoritative confidence and the film’s overall Powerpoint aesthetic. One of the documentary’s masterstrokes is its repurposing of disaster movie aesthetics within the framework of a science lecture documentary. The wall of rushing water is validated by the context of genre — we expect this to be true, to be right, to pass by unquestioned, for Professor Gore tells us students it’s so.

To its advantage, the documentary touches on a variety of occurrences that are both causing and reflecting the climate change problem, whereas the Hollywood film takes its cue from one basic concept. In The Day After Tomorrow, the oft-debated notion that climate change does not necessarily occur gradually but instead can happen much more rapidly is taken to a hilariously literal extreme. By rapid, the experts mean decades, not centuries, which the film (playing the dumb guy in the back of the class) converts into days for dramatic effect. Of course, it’s hard to blame them. What would happen to the expensive tidal wave, the tornados in Los Angeles, the snow in New Delhi, or the whole Northern Hemisphere in an ice age that they put so much computer power into developing? What the makers of the film missed was the need to temper the destruction with effectively conveyed hard science — it needs a serious counterweight to balance its over-the-top imagery.

An Inconvenient Truth, on the other hand, could have said that giant Martian space heaters are causing global warming and people would have likely swallowed it whole. Thankfully, it does try (though it could have done better) to seriously address the issue. But it’s hard not to notice that timing, context and a safely reasonable attitude are what really made the film so successful. Of course, the real key, as noted by almost everyone, is the reconstituted Gore himself. If the documentary presents a famous statue come to blazing life, the fiction film shows us people so wooden and inert we’re frankly amazed they outrun tidal waves. Gore not only seems charming and thoroughly persuasive, but funny and contemplative too. Talking about the slow ruin of a river on his family farm, the former vice president smartly makes a global problem personal. The film occasionally takes this too far (his son’s accident, his sister’s death from lung cancer) and steers away from the issue at hand, but it still seems way more effective than the nameless cancer patient Quaid’s doctor wife tends to as the world freezes around them. Again, the context makes all the difference — the impersonal scale of the fiction film demands a personal story to carry it, while the documentary just has to follow suit within its smaller scale.

Watching both films again, it seems almost as if The Day After Tomorrow was made (so badly) in order to make the documentary all the more successful — it sure as hell didn’t hurt it. The larger problem (well, save for global warming itself) is the lack of other high profile films about this issue. The failure of the fiction film will make Hollywood less likely to bankroll another (probably a blessing), while the success of the documentary will relegate others to, at best, the dustbin of low-profile festivals or PBS. It’s a damn shame because the climate change problem deserves more films that will provoke more debate and even more awareness.