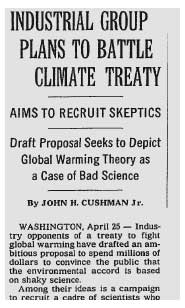 Long before intelligence was manufactured about non-existent Iraqi WMDs, Exxon was involved in a plan to muddy the issue of global warming.

In 1998, the American Petroleum Institute, of which ExxonMobil is a major backer (CEO Lee Raymond was a two-time chairman of API), argued in a memo that if it could “show that science does not support the Kyoto treaty” then U.S. negotiators would not have to make concessions on limiting greenhouse gas emissions.

“Victory,” the memo bluntly stated, “will be achieved when” average citizens and the media recognizes “uncertainties in climate science” and when “recognition of uncertainties becomes part of the ‘conventional wisdom.’”

API laid out a detailed agenda “to generate national, regional and local media coverage on the scientific uncertainties.”

The New York Times exposed the memo in 1998 but it didn’t impede ExxonMobil. As the world’s largest energy corporation, Exxon would wither away if meaningful limits were put on carbon-spewing fossil fuels. So it has gone about funding scores of groups and hundreds of public figures to dispute every scientific aspect of global warming.
Environmental groups have uncovered more than $10 million in Exxon funds going to at least 40 groups since 2000. Greenpeace, at exxonsecrets.org, details 138 separate organizations in ExxonMobil’s global warming-denying web.

Mother Jones says these outfits “either have sought to undermine mainstream scientific findings on global climate change or have maintained affiliations with a small group of ‘skeptic’ scientists who continue to do so.”

Of the hundreds of “experts” who receive funding directly from Exxon or work at Exxon-funded outfits, only 10 are actual scientists. The others are policy wonks, pundits, lobbyists and former government officials that make up the “global warming is a hoax” echo chamber. Some Exxon scientists do have a background in climatology or atmospheric science, but others come from unrelated fields such as astrophysics, geography or math. The astrophysicists have their own specialty — pushing the discredited argument that cosmic phenomena are responsible for warming.

Some have made a career of global warming denialism, and all have clear conflicts of interest and have engaged in unethical behavior in fronting for energy-funded policy outfits. Almost all have been given soapboxes during congressional hearings, invited by Congress members who themselves are funded by energy interests.

Despite their disreputable backgrounds, the Exxon scientists are still given prominence in the corporate media. This March, four were featured in “The Great Global Warming Swindle,” broadcast by U.K.’s Channel 4, and three were given platforms on CNN ’s “Exposed: The Climate of Fear,” broadcast in May.

Overall, Exxon’s strategy has worked. While there is little dispute among thousands of scientists studying the questions of global warming, other than those funded by the energy industry, the Bush administration, Congress and the media is full of doubters who claim that there is vigorous debate among scientists on the subject. And it’s to these oily “skeptics” they repeatedly return to for confirmation that global warming is a hoax or poses no threat.