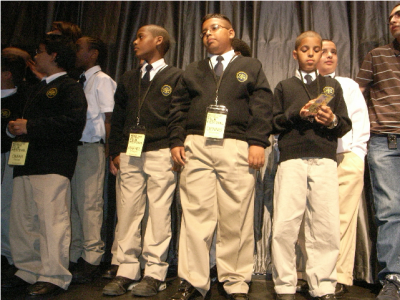 By Amy Wolf
As filmmakers clamor to get their work on the web, the Media That Matters Film Festival already garners over two million views per year. But Arts Engine, the producers of the fest, have progressed beyond the Internet in true Web 2.0 spirit—moving short films from the small screen to the big screen and TV screen. Audience matters to media that matters, and more mediums mean a more diverse viewership. Web-based distribution and organizing coupled with on-the-ground outreach and screenings increases the potential of the role and relevancy of short film in activism and social change.

This year, the festival cultivated 16 films selected in part for their ability to “fuel movements,” as Arts Engine Executive Director and filmmaker Katy Chevigny said at their HBO-hosted award ceremony in late May. Although not produced solely by youth, predominant themes throughout the festival were wisdom, imagination, and the defying the constructs of age, with films about the powerlessness of dementia alongside films emoting a youthful sense of grandeur and precociousness. The shorts, all under eight minutes long featured journalists, rappers or superstars too young to vote or even stay home alone. Although some experienced filmmakers were in attendance, the cumulative effect was enough delightful kid-wisdom to make Doogie Howser’s head spin.

Why not do an interview perched atop your parent’s minivan like Stephen Sotor, the 13 year old who produced “The Final Frontier: Explorers or Warriors?” As he collected his Next Generation Award, Sotor confessed that his co-producer, Trace Gaynor could not be at the award ceremonies, as “his parents don’t let him travel much.”

The fresh perspectives developed when a thirteen year old is behind the lens shine as interviewees become surprisingly concise when speaking to young people. If the Washington Press Core were all underage, would our politicians be forced to make sense?

In “Rapping at Fear,” 13-year-old Andrés Tabares tells the story of his family being forced by militias to move off of their farm in rural Columbia to Bogotá. Using animation, rap and a rap-video format, Tabares, who has adapted exceedingly well to city life, shares his acute observations that “here everything comes in bags,” and “if you have money, you buy stuff, if you don’t, you can’t.” The bright colors and simple figures were a powerful and bizarre treatment of a child’s memory of terror. The film was co-produced by youth media network Listen Up!, a group that connects youth producers with opportunities and support internationally.

“Farm Sanctuary,” a film that award-presenter Ira Glass said, “did something rare, it made vegans look sympathetic,” tickled audiences. Middle school city kids from Saint Ignatius go vegan for three days and learn about industrial farming practices and conditions while cavorting with rescued pigs, goats and chickens. Oddly enough, however, the film did not picture or describe any of these terrible conditions, or even show the kids learning about it.

Not all the films left viewers with a warm fuzzy feeling. “Still Standing”, the winner of the festival’s highest honor, the Jury Award, tells the powerful story of an African American woman who fights to keep her home on a primarily white block after Katrina. The gross injustices she faces and the cruelty of racism seem no match for Ms. Gertrude’s, who’s spirit comes across with unwavering strength as she tells the camera that “God ain’t made no fool here, this s a strong black woman, they in for a fight.” Yet her story ends not with triumph, but with a bill from the city for over $20,000 for demolishing her home.

One of the most powerful films, and winner of the Global Justice Award, is the “Massacre at Murambi,” produced and directed by Sam Kauffmann. This short film implicated the viewer in the West’s belated efforts to deal with the Rwandan Genocide and subsequently, the Genocide in Darfur. More than any other film in the festival, “Massacre” confronts the viewer with their implicit guilt of doing too little too late. Kauffmann skillfully pans the piles of bones and ashen dried human carcasses taken at the genocide museum in Murambi, Rwanda, accompanied by the cold French narration, translating to, “Some say if they had been white, we would have intervened. Well they are white now.”

The Media that Matters Film Festival will be shown around world all year long, using every distribution mechanism possible, including streaming, DVD, broadcast and good old fashioned screenings. All 16 films are available to view in their entirety at www.mediathatmattersfest.org.