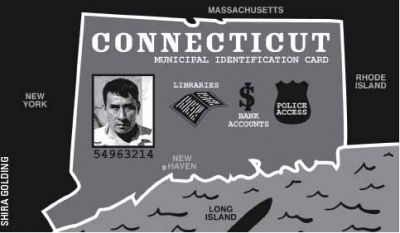 By Elijah Barrett Aviles
New Haven, Connecticut, made national headlines on June 4 when it approved a plan to issue municipal IDs to all city residents — a scheme that would let undocumented immigrants use city facilities and enable them to open bank accounts. Some 36 hours later, a team of agents from Immigration and Customs Enforcement (ICE) detained 32 immigrants in the city’s Fair Haven neighborhood, which is mostly Latino.

Mayor John DeStefano, along with city officials and longtime immigrants’ rights activists, has accused ICE (which is a part of the Department of Homeland Security) of retaliating against New Haven — which, so far, is the only city in the country to agree to issue such IDs to all of its residents. For all undocumented immigrants, the raids raise the questions of whether other municipalities could issue similar IDs, and is the risk of retaliatory raids by ICE too great?

Immigrants’ rights advocates have promoted municipal identification cards across the country because they give undocumented workers access to resources such as libraries and parks, in addition to providing the papers needed to open a bank account. Without bank accounts, the undocumented are frequent targets of attacks and muggings, because they’re known to carry cash with them or stash money in their homes. Finally, the supporters of city IDs say that the cards could ease tensions with police, who perhaps will take immigrants’ complaints more seriously and respond better to crime when they’re offered an ID.

Oscar Domingues, an organizer for Movement for Justice en el Barrio, an immigrants’ rights group in East Harlem, said he thinks it is possible to win ID cards in New York “if organizers put pressure on the city for what’s just.”

But there are costs involved. In New Haven, which has a population of about 120,000 people, the program costs $237,000 a year, the bulk of which goes to paying three staff people to start the program.

The funds were provided by a grant from the First City Fund Corporation. A spokesperson for Mayor Michael Bloomberg contacted by The Indypendent said the mayor supports a national ID card with biometric information but offered no support for municipal IDs.

Even if New York’s municipal government rallied around ID cards, would the risk of ICE retaliation be worth it?

Mayor DeStefano and New Haven’s director of social services, Kica Matos — formerly head of the immigrants’ rights group JUN TA — both say that it was not a coincidence that the raids quickly followed the Board of Aldermen’s decision to support the ID card plan.

On Long Island, Nadia Marin-Molina, executive director of the Workplace Project, which organizes low-wage Latino immigrants to fight for better working and living conditions, says that raids had been happening in Connecticut before New Haven decided to issue the IDs, but regardless, they shouldn’t stop the demand for city IDs.

They’re happening all over the place,” she says.

According to ICE’s website, the agency “removed a record 189,670 illegal aliens from the country” in the 2006 fiscal year. Organizing for immigrants’ rights happens with the threat of raids constantly in mind, Marin-Molina adds.

When ICE raids followed the massive immigrant protests of April and May 2006, she notes, “Some people were saying, ‘if we hadn’t done those marches, [immigration officials] wouldn’t have done those raids and now look, they’re coming after us,’ and the truth is, how many raids there are is set by the policy by the federal government. She explains this is determined “by how many detention beds are being built and how many ICE agents are being trained and funded every year. And that’s been increasing and increasing and increasing. So the raids are going to step up. If we don’t do protests, if we quiet down, they’re not going to stop the raids.”

Her concern, however, is that a list of individuals who signed up for the cards could be turned over to ICE.

But a report by a Yale Law School immigration clinic said, “it is unlikely that the Department of Homeland Security would make a blanket request for all records relating to municipal identification cards,” such as one to set up a roundup of undocumented immigrants in New Haven.

“Even before the September 11 terrorist attacks, federal immigration authorities focused their limited enforcement resources on anti-smuggling initiatives and apprehension and removal of persons with criminal convictions,” the report said.

“Since September 11, these immigration enforcement resources have been directed almost exclusively at counter-terrorism programs, including smuggling operations, surveys of ‘critical infrastructure’ facilities and initiatives focused on men from predominantly Muslim, Arab or South Asian countries, as well as a continuing emphasis on removal of ‘criminal aliens.’”