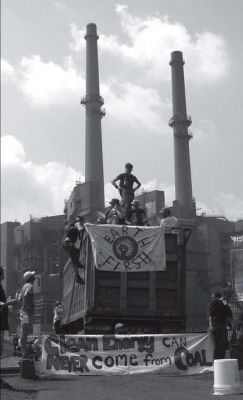 Near the town of Carbo in western Virginia on July 10, 2006, 75 people stood on a bridge between massive coal trucks and the Clinch River power plant. Owned by American Electric Power, the plant is responsible for emitting 4.25 million pounds of carbon dioxide into the air annually. As the coal trucks stopped, two people locked themselves to the trucks’ frame. They flattened the tires of the coal trucks and prevented them from moving forward. The demonstration resulted in closing the only access to the power plant for most of the day.

Rising Tide is a grassroots network that encourages nonviolent action to confront the root causes of climate change by promoting local, community-based solutions.

The movement was born in the Netherlands in 2000 in order to bring a radical voice to U.N. climate talks, that failed to salvage what was left of the Kyoto Protocol. Employing popular education and with a focus on climate justice, Rising Tide now spans three continents – North America, Europe and Australia.

In North America, Rising Tide’s strategy is “a no-compromise approach of stopping the extraction of more fossil fuels and preventing the construction of new fossil fuel infrastructure.” The group adds, “we must phase out our current fossil fuel use and make a just transition to sustainable ways of living.”

“Changes will be made by people, not institutions,” said Abigail Singer, with Asheville Rising Tide. “The goal is to take a bottom-up approach to connecting the dots between oil, war, capitalism, coal and the destabilization of the global climate.”

Singer was arrested Feb. 7, 2007, after she hung a banner across an Asheville billboard with a message against a proposed oil-fired power plant in Woodfin, North Carolina. Rising Tide worked with other local environmental groups in convincing the local planning board to block the construction of the Progress Energy’s 130 megawatt power plant.

“When we begin to build a culture of mutual aid and community autonomy, we demonstrate that we don’t need the government, and certainly not giant corporations, to survive,” Singer said.

Six weeks after the action in Virginia, more than 600 people participated in a week-long “Camp for Climate Action” sponsored by Rising Tide in “Megawatt Valley,” in North Yorkshire, England.

Skill sharing and workshops took place at the makeshift camp just outside the fence of Drax Power Station, the largest single emitter of carbon dioxide in England.

On Aug. 31, activists cut through the fence and marched towards Drax. It was reported that at least 3,000 police officers responded, and 38 people were arrested. The railroad was also blocked, preventing coal from entering the facility.

In Australia, Rising Tide is leading the effort to oppose new coal mines and port expansion that would increase the country’s coal exports by 70 percent.

On June 5, 2006, more than 70 people in a fleet of canoes, kayaks, dinghies, surf skies and body boards occupied the world’s largest coal port in Newcastle, Australia.

A defining principle of Rising Tide is climate justice. In the aftermath of Hurricane Katrina, with communities in Africa facing severe drought, Arctic peoples facing thawing ice and permafrost and villages flooding on islands in Oceania, Rising Tide activists argue that the people most affected by climate change are the same people who have been exploited and oppressed throughout the history of civilization.

“The people hardest hit by climate- induced natural disasters have been and will continue to be those most disenfranchised by our society and least responsible for the emission of greenhouse gases. … The ‘natural’ disasters caused by climate change amplify the injustices inherent in a capitalist, racist, and patriarchal society.” notes the group.

Rising Tide called for an International Day Against Climate Change June 8 as the eight most powerful countries (G8) met in Germany.

“The G8 leaders meeting in Germany behind their fences and soldiers are leading us further towards catastrophic and irreversible climate disaster,” noted a press release issued June 4. The group says that they don’t believe that “the dominant, businessfriendly means of addressing climate change will have any significant impact preventing catastrophic global warming … and only serve to reinforce the same unsustainable system that got us into this mess.”

Grassroots efforts to combat global warming will intensify in August when the Convergence for Climate Action is set to take place in regional camps in the United States. In England, Camp for Climate Action will set up outside Heathrow International Airport in London, protesting the proposed expansion of the airport and bringing attention to air traffic’s contribution to greenhouse gas pollution.