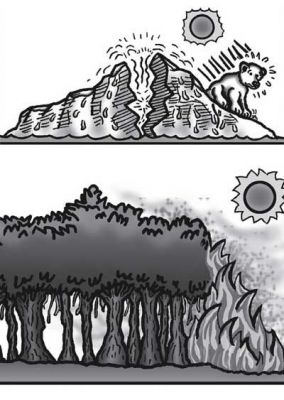 Conventional wisdom has been turned on its head in recent years as climate secrets, past and present, have been unlocked. Evidence from past global warmings and coolings shows that small changes can gain momentum and drive much larger changes. Think of a car speeding downhill as the brakes fail. With the world’s average temperature having increased one degree Fahrenheit in the past century and expected to increase by a minimum of another two degrees Fahrenheit in the coming decades, the danger of a non-linear, “runaway” global warming grows. Here are some of the feedback loops that could drive this process if nothing is done:

Melting Icecaps
The fastest warming is taking place at the poles. The Arctic’s summertime sea ice is declining at a rate of 9.1 percent per decade and could disappear entirely by the middle of the 21st century. Heat that was once reflected into space by the ice is now absorbed by dark ocean waters, further driving the process.

Fracturing Icecaps
Where it was once thought that the underside of large masses of ice would be impervious to warmer air temperatures, scientists have learned that melted water on the ice surface, created by warming, percolates deep into ice shelves, weakening it to the point of disintegration.

Water Vapor
Increasing temperatures cause more water to evaporate. That vapor in turn adds to the greenhouse effect.

Permafrost Melt /Methane Release
As the Arctic continues to warm and the permafrost that covers the region melts, large stores of methane are released. A greenhouse gas, methane is 23 times more potent than carbon dioxide. The world’s soils contain five times more carbon than the atmosphere. As temperatures increase, more of this natural carbon will be released into the atmosphere.

Warming Oceans
Warmer water holds less dissolved gas than colder water, reducing the ocean’s ability to store as much human-emitted carbon dioxide. Higher levels of carbon dioxide increase acidification in the ocean, diminishing the growth of phytoplankton, the one-celled plants that absorb carbon from the air during photosynthesis and form the base of the marine food chain. Increased levels of carbonic acid also have a detrimental effect on a wide array of creatures that secrete structures and shells made of calcium carbonate.

Southern Ocean Maxed Out
Stronger winds triggered by warming tropical temperatures is bringing natural carbon to the surface of the Southern Ocean, which encircles Antarctica. This thwarts the ocean’s ability to absorb human-caused carbon from the atmosphere. The Southern Ocean holds 15 percent of the global carbon sink, absorbing approximately 50 percent of all human carbon emissions. Scientists were recently startled to discover that the ocean has become saturated with carbon dioxide much sooner than their prediction of the end of the 21st century.

Amazon Rainf orest : As temperatures rise and the Amazon dries up, it will become increasingly vulnerable to lightning- and human-caused fires that could decimate it. As much as 150 billion tons of carbon dioxide could be released, turning one of the world’s most important carbon sinks into a desert.

Methane Hydrate Release
The gradual warming of sea sediments and increase runoff from rivers could lead to underwater landslides along the ocean’s continental margins. This could release billions of tons of frozen methane hydrates stored beneath the ocean floor. This last occurred 55 million years ago. In an event known as the Paleocene-Eocene Thermal Maximum, global temperatures rose by an additional 9-13 degrees Fahrenheit. The potential effects of such a release read like a bad Hollywood script: giant exploding fireballs ripping across the sky, the shredding of the ozone layer, oceanic life driven to extinction for lack of oxygen, and the appearance of continent-sized “hypercanes” with winds as high as 500 mph.