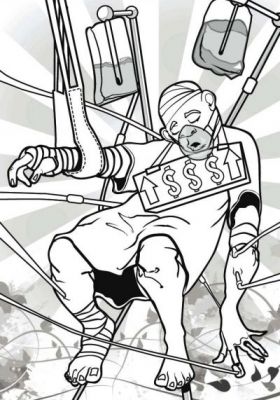 By Charlie Bass
Sacrificing the ferocious rhetorical style of Fahrenheit 9/11 for a more contemplative, exasperated approach, Michael Moore’s new film Sicko shows the controversial documentarian not exactly maturing, but at least learning how to get out of his own way. The fatal flaw of his films is always Moore himself, the blowhard at the party whose intelligent, potentially persuasive arguments are consistently undermined by condescension, pettiness, sloppy research and a need to be the center of attention. This still holds true for Sicko, but Moore wisely removes himself (as much as he can) from the center of the film, instead focusing on letting real people share either their horrific experiences within the privatized American health care system or their wonderful experiences within the national systems of the U.K., France, Canada and, yes, Cuba. This makes Sicko his least frustrating work, and despite its general over-simplification of a complicated issue, the film’s central argument about the corruption of our healthcare system proves undeniable.

Though he has described his new film as a comedy about America’s 45 million uninsured, Moore uses the opening sequence of Sicko to explain that the film will instead focus on the millions more Americans who are insured. The following hour presents a series of heartbreaking stories of insured people denied care for a variety of increasingly vague and/or spurious reasons, including a woman whose daughter died because her provider, Kaiser Permanente, refused to allow her admission into a non-Kaiserrun hospital. This leads Moore to a disturbing kind of HMO origin scene, where we hear excerpts from a conversation between President Richard Nixon and a top aide supporting Edgar Kaiser’s plan to “make more money while providing less care.” Moore also interviews a couple of ex-HMO employees, ravaged by guilt, who explain how they were rewarded for actively pursuing any loophole (such as labeling legitimate treatments “experimental”) that would allow the insurance companies to charge treatment back to the “insured.”

The first half of the film is Moore’s best work as a filmmaker, as he expertly connects the personal horror stories to the larger forces (insurance companies, lobbyists) that have made our system so uniquely corrupt. But the second half of the film lessens the impact as Moore heads abroad where the reality of socialized medicine is presented as if no one in France, Canada or the U.K. has ever encountered any problems within their system. It’s the necessary counterpoint for his argument about our HMOs, but it needed to be tempered a bit so as not to look so flawlessly rosy (Canadian critics have already decried this). Still, after watching people get 4 a.m. doctor house calls in Paris at no charge, one feels a strong urge to move abroad.

The film’s final sequence details Moore’s blockade-busting trip to Cuba, which seems like a childish prank before shifting into an affecting, if somewhat maudlin, sequence in Havana. Gathering people introduced earlier (including several workers from Ground Zero) Moore shows them receiving excellent care for free in a poor country in the Global South. Just seeing one devastated woman pay five cents for medication she can barely afford here is enough to support Moore’s point about what we could learn from the health care in other countries.