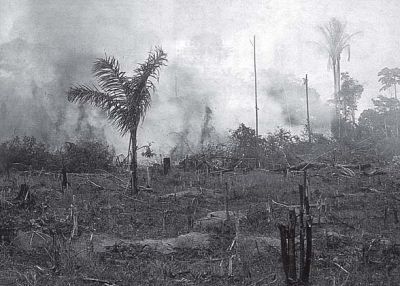 Deforestation of the Amazon, happening at the rate of 325,000 hectares per year, is linked to to the market price of soybeans, a primary crop used for biofuel. Photo: NASA LBA-ECO Project

Biofuels invoke an image of renewable abundance that allows industry, politicians, the World Bank, the United Nations and even the Intergovernmental Panel on Climate Change to present fuel from corn, sugarcane, soy and other crops as a replacement for oil that will bring about a smooth transition to a renewablefuel economy. Myths of abundance divert attention from powerful economic interests that benefit from this biofuels transition, avoiding discussion of the growing price that citizens of the global South are beginning to pay to maintain the consumptive oil-based lifestyle of the North. Biofuel mania obscures the profound consequences of the industrial transformation of our food and fuel systems — the agro-fuels transition.

Industrialized countries have unleashed an “agro-fuels boom” by mandating ambitious renewable fuel targets. Renewable fuels are to provide 5.75 percent of Europe’s transport fuel by 2010, and 10 percent by 2020. The U.S. goal is 35 billion gallons a year. These targets far exceed the agricultural capacities of the industrial North. Europe would need to use 70 percent of its farmland for fuel. The United States’ entire corn and soy harvest would need to be processed as ethanol and biodiesel. Northern countries expect the global South to meet their fuel needs, and southern governments appear eager to oblige. Indonesia and Malaysia are rapidly cutting down forests to expand oil-palm plantations targeted to supply up to 20 percent of the European Union biodiesel market. In Brazil — where fuel crops already occupy an area the size of the Netherlands, Belgium, Luxemburg and Great Britain combined — the government is planning a fivefold increase in sugar cane acreage with a goal of replacing 10 percent of the world’s gasoline by 2025.

The rapid capitalization and concentration of power within the agro-fuels industry is breathtaking. From 2004 to 2007, venture capital investment in agro-fuels increased eightfold. Private investment is swamping public research institutions, as evidenced by BP’s recent award of half a billion dollars to the University of California. In open defiance of national anti-trust laws, giant oil, grain, auto and genetic engineering corporations are forming powerful partnerships: ADM with Monsanto, Chevron and Volkswagen, BP with DuPont and Toyota. These corporations are consolidating research, production, processing and distribution chains of our food and fuel system under one colossal, industrial roof.

Agro-fuel champions assure us that because fuel crops are renewable, they are environmentally friendly and can reduce global warming, fostering rural development. But the tremendous market power of agro-fuel corporations, coupled with weak political will of governments to regulate their activities, is a recipe for environmental disaster and increasing hunger in the global South. It’s time to examine the myths fueling this biofuel boom — before it’s too late.

Myth #1: Agro-fuels are clean and green

Because photosynthesis from fuel crops removes greenhouse gases from the atmosphere and can reduce fossil fuel consumption, we are told fuel crops are green. But when the full “life cycle” of agro-fuels is considered — from land clearing to automotive consumption — the moderate emission savings are undone by far greater emissions from deforestation, burning, peat drainage, cultivation and soil carbon losses. Every ton of palm oil produced results in 33 tons of carbon dioxide emissions — 10 times more than petroleum. Clearing tropical forests for sugarcane ethanol emits 50 percent more greenhouse gases than the production and use of the same amount of gasoline.

There are other environmental problems as well. Industrial agro-fuels require large applications of petroleum-based fertilizers, whose global use has more than doubled the biologically available nitrogen in the world, contributing heavily to the emission of nitrous oxide, a greenhouse gas 300 times more potent than carbon dioxide. To produce a liter of ethanol takes three to five liters of irrigation water and produces up to 13 liters of waste water. It takes the energy equivalent of 113 liters of natural gas to treat this waste, increasing the likelihood that it will simply be released into the environment. Intensive cultivation of fuel crops also leads to high rates of erosion.

Myth #2: Agro-fuels will not result in deforestation

Proponents of agro-fuels argue that fuel crops planted on ecologically degraded lands will improve, rather than destroy, the environment. Perhaps the government of Brazil had this in mind when it re-classified some 200 million hectares of dry tropical forests, grassland and marshes as “degraded” and apt for cultivation. In reality, these are the bio-diverse ecosystems of the Mata Atlantica, the Cerrado and the Pantanal, occupied by indigenous people, subsistence farmers and extensive cattle ranches. The introduction of agro-fuel plantations will simply push these communities to the “agricultural frontier” of the Amazon where deforestation will intensify. Soybeans supply 40 percent of Brazil’s biodiesel. NASA has positively correlated their market price with the destruction of the Amazon rainforest — currently at nearly 325,000 hectares a year.

In the tropics, 100 hectares dedicated to family farming generates 35 jobs. Oil palm and sugarcane provide 10 jobs, eucalyptus two and soybeans just one half-job per 100 hectares, all poorly paid. Until this boom, agro-fuels primarily supplied local markets, and even in the United States, most ethanol plants were small and farmer-owned. Big Oil, Big Grain and Big Genetic Engineering are rapidly consolidating control over the entire agro-fuel value chain. The market power of these corporations is staggering: Cargill and ADM control 65 percent of the global grain trade, Monsanto and Syngenta a quarter of the $60 billion gene-tech industry. This market power allows these companies to extract profits from the most lucrative and low-risk segments of the value chain — hundreds of thousands of small farmers have already been displaced by soybean plantations in South America.

Myth #4: Agro-fuels will not cause hunger

Hunger, said Amartya Sen, results not from scarcity, but poverty. According to the U.N. Food and Agriculture Organization, there is enough food in the world to supply everyone with a daily 3,500-calorie diet of grains, fresh fruit, nuts, vegetables, dairy and meat. Nonetheless, because they are poor, 824 million people continue to go hungry. If current trends continue, some 1.2 billion people could be chronically hungry by 2025 — 600 million more than previously predicted. World food aid will not likely come to the rescue because surpluses will go into our gas tanks. What is urgently needed is massive transfers of food-producing resources to the rural poor, not converting land to fuel production.

Myth #5: Better “second-generation” agrofuels are just around the corner

Proponents of agro-fuels argue that current agro-fuels made from food crops will soon be replaced with environmentally friendly crops like fast-growing trees and switchgrass. This myth, wryly referred to as the “bait and switchgrass” shell game, makes food-based fuels socially acceptable.

The agro-fuel transition transforms land use on a massive scale, pitting food production against fuel production for land, water and resources. The issue of which crops are converted to fuel is irrelevant. Wild plants cultivated as fuel crops won’t have a smaller “environmental footprint.” They will rapidly migrate from hedgerows and woodlots onto arable lands to be intensively cultivated like any other industrial crop, with all the associated environmental externalities.

The International Energy Agency estimates that over the next 23 years, the world could produce as much as 147 million tons of agro-fuel. This will be accompanied by a lot of carbon, nitrous oxide, erosion and more than two billion tons of waste water. Remarkably, this fuel will barely offset the yearly increase in global oil demand, now standing at 136 million tons a year — not offsetting any of the existing demand.

The agro-fuel transition is based on a 200-year relation between agriculture and industry that began with the Industrial Revolution. The invention of the steam engine promised an end to drudgery. As governments privatized common lands, dispossessed peasants supplied cheap farm and factory labor. Cheap oil and petroleum- based fertilizers opened up agriculture itself to industrial capital. Mechanization intensified production, keeping food prices low and industry booming. The last 100 years have seen a threefold global shift to urban living with as many people now living in cities as in the countryside. The massive transfer of wealth from agriculture to industry, the industrialization of agriculture, and the rural-urban shift are all part of the “agrarian transition,” transforming most of the world’s fuel and food systems and establishing non-renewable petroleum as the foundation of today’s multi-trilliondollar agri-foods industry.

The pillars of this agri-foods industry are the great grain corporations, including ADM, Cargill and Bunge. They are surrounded by an equally formidable consolidation of agro-chemical, seed and machinery companies on the one hand and food processors, distributors and supermarket chains on the other.

Like the original agrarian transition, the present agro-fuels transition will “enclose the commons” by industrializing the remaining forests and prairies of the world. It will drive the planet’s remaining smallholders, family farmers and indigenous peoples to the cities. This government-industry collusion has the potential to funnel rural resources to urban centers in the form of fuel, concentrating industrial wealth. But this time, there is no cheap fuel to drive industrial expansion and there will be no jobs for the masses of people displaced from the countryside. Millions of people may be pushed farther into poverty.

The agro-fuels transition is not inevitable. There is no inherent reason to sacrifice sustainable, equitable food and fuel systems to industry. Many successful, locally focused, energyefficient and people-centered alternatives are presently producing food and fuel in ways that do not threaten food systems, the environment or livelihoods. The question is not whether ethanol and biodiesel have a place in our future, but whether or not we allow a handful of global corporations to impoverish the planet and the majority of its people. To avoid this trap we must promote a steady-state agrarian transition built on re-distributive land reform that re-populates and stabilizes the world’s struggling rural communities. This includes rebuilding and strengthening our local food systems and creating conditions for the local re-investment of rural wealth. Putting people and environment — instead of corporate megaprofits — at the center of rural development requires food sovereignty: the right of people to determine their own food systems.