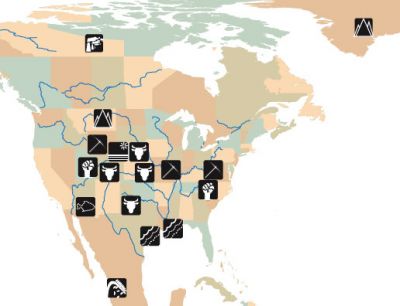 CHINA
Produces 2.3 billion tons of CO2 22.5 million tons of sulfur emissions in 2004, double the amount released by the U.S. Acid rain now falls on 30% of China.

International Coal Trade Center
SHANXI PROVINCE, CHINA
Supplying 2/3 of China’s energy, this region alone is expected to produce almost as much coal as was mined in Germany, England and Russia together in 2005.

UNITED STATES
Has 25% of the world’s recoverable coal reserves (270 billion tons) The world’s second-largest producer of coal; it is also the #2 consumer of coalfired electricity in the world.

Peabody Energy
ST. LOUIS, MISSOURI
Largest coal company in the world, with reported profit of $5.3 billion in 2006; gave $846,000 to federal election campaigns in the 2000 presidential election, with 98% going to Bush’s campaign.

North Antelope Rochelle Complex (Owned by Peabody)
GILETTE, WYOMING
The largest coal mine in North America. Their website boasts, “trainloads of coal shipped from the mine would stretch from Los Angeles to Boston and back again.”

Mountaintop Removing Mining
APPALACHIA
Major site of mountaintop removal mining in the U.S., where more than 400,000 acres of the Appalachian Mountains have been removed and over 1,200 miles of streams buried.

TEXAS, NEBRASKA, KANSAS
The heart of the U.S. cattle industry. Combined, these states accounted for two-thirds of all beef cattle feedlot production.
In 2002, Texas had 2.7 million beef cattle on feedlots,
Kansas, 2.3 million, and
Nebraska, 2.2 million.

PERU AND BOLIVIA
The Broggi glacier near Huascaran in the Peruvian Andes receded about one kilometer in from 1932-1999.

THE ALPS
The Rhone glacier in the kanton of Valais, Switzerland, has retreated 2.5 km since 1859 while the Pasterze, Austria’s longest glacier, has decreased about 2 km. in length since the 19th century.

GREENLAND
With the second-largest ice cap in the world after Antarctica, Greenland showed the greatest measured surface melt of ice in 2002 in 24 years. 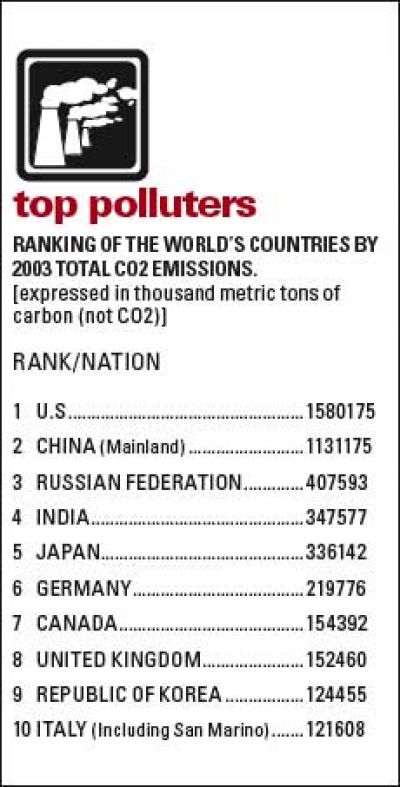 Of the 6.5 billion humans in the world, half live in coastal regions.

COASTAL AREAS IN SOUTH, EAST AND SOUTHEAST
Asia will be at greatest risk to increased flooding from the sea and, in some mega-deltas, river floods.

BANGLADESH
Anywhere from 13 to 30 million people are threatened with displacement in Bangladesh due to possible flooding.

TUVALU
This nation of 11,000 people on nine coral atolls scattered across half-a-million square miles of the South Pacific may disappear entirely as most of the land is barely one meter above sea level.

VENICE
Water levels in Italy’s famed Venice, already having risen 40 inches over the last 250 years, may increase by as much as one yard more this century.

A three-foot rise in sea levels could inundate some 22,400 square miles of land in the United States, primarily in Louisiana, Texas, Florida and North Carolina.

WHALES
Due to habitat loss, more acidic oceans, higher transmission rates of diseases and the disruption of fish and plankton populations. Arctic species such as Narwhals and Belugas are particularly vulnerable to habitat loss as warming leaves them no place to retreat.

KRILL
Around Antarctica, krill populations, tiny marine animals that depend on sea ice for survival, have crashed in some areas by as much as 80% since the ’70s. Species vulnerable to krill shortages include penguins, albatrosses, seals and whales.

CORAL REEF
such as the Great Barrier Reef are already dying from agricultural runoff, water pollution, cruise-ship waste and overfishing. Warming increases “bleaching” that can wipe out huge sections of reef.

In Australia and New Zealand, significant loss of biodiversity is projected to occur by 2020. Other sites at risk include Kakadu wetlands, southwest Australia, sub-Antarctic islands and the alpine areas of both countries.

The 27 “Sky Islands” at high elevations in southern Arizona are nearing collapse. Intensifying droughts, catastrophic fires and devastating insect infestations are pushing many unique plant and animal species to the point of extinction. Hundreds of bird species are threatened along with Bengal tigers in Southeast Asia’s Sundarbans, the world’s largest mangrove forest.

The World Health Organization estimates 150,000 are already dying every year from the effects of warming, mainly in Africa and Asia.

LATIN AMERICA
Mosquitoes that spread dengue and yellow fever and which were unable to survive at 1,000 meters above sea level have been found at heights of 2,200 meters.

According to Intergovernmental Panel on Climate Change, other general health effects include:

• increases in malnutrition and consequent disorders, with implications for child growth and development;

• the increased burden of diarrheal disease;

• the increased frequency of cardiorespiratory diseases due to higher concentrations of ground level ozone related to climate change; and,

• the altered spatial distribution of some infectious disease vectors.

SOUTH ASIA
By 2050, the food security of some 200 million people in wheat-growing regions of South Asia will most likely be threatened.

AFRICA AND LATIN AMERICA
Production of the vital maize crop could drop by 10% by 2055.

From 16 to 22% of wild relatives of peanuts and potatoes will go extinct in the next 50 years. Wild species are important for helping crops adapt to harsher conditions because they provide genes for drought tolerance and pest resistance.

In some African countries, yields from rain-fed agriculture could be reduced by up to 50% by 2020.

AUSTRALIA
Murray -Darling River Basin
Prime farming region may disappear as crucial winter rainfalls in the southwest have decreased by up to 20% as drier climate has pushed south.

SOUTH AMERICA
Amazon River
Was hit with a severe drought in 2005 that dried up lakes and tributaries. The cause was attributed to warming and deforestation and forest fires.The drought in turn led to more fires.

U.S.
Colorado River
By mid-century it’s projected that the average snowpack in the Colorado River basin will decrease by 30%.

AFRICA
By 2020, between 75 and 250 million people are expected to suffer from increased water stress.

Freshwater availability in Central, South, East and Southeast Asia, particularly in large river basins, is projected to decrease. Combined with population growth and increasing demand arising, more than a billion people could be adversely affected by the 2050s.

CAMP FOR CLIMATE ACTION
United Kingdom, August 2007
2006: Hundreds of activists shut down Drax Power Station, the largest coal-fired powerplant in the UK for a day. 2007: Thousands of people plan to camp out at Heathrow International Airport to share skills and raise awareness about global warming.

HUMAN RIGHT S VS. OIL
NIGER DELTA , NIGERIA: Native Ogoni people have been fighting Shell Oil since 1990s over human rights’ abuses, environmental contamination, and a lack of money invested in their community from sale of oil.

EASTERN ECUADOR, AMAZONIA: A $6 billion lawsuit has been filed by 30,000 Amazon forest dwellers against Texaco (now part of Chevron) for decades of extreme environmental degradation and human rights violations.

DINÉ & HOPI NATIONS: Native American communities continue to resist Peabody Coal’s Black Mesa strip mine, which is polluting the air and depleting a pristine aquifer that is the main source for local springs.