History has shown that behind most Indigenous struggles is an imperial conquest for resource extraction. Five-hundred years ago the relationship between Europeans and the Indigenous people they “discovered” in the “Americas” revolved around enslavement and exporting natural resources from their lands, leading to rapid economic development and the Industrial Revolution back in Europe.

The legacy of colonialism pitted two ways of life against each other — one in which the world was defined by private property and monetary value and another based on bioregional harmony and sustainability.

In the United States, a legacy of broken treaties, forced migration and assimilation, the creation of reservations and now trust and royalty agreements, have crushed native Americans under the racist wheel of progress and profit.

To this day, tribes across the United States continue to resist, and struggle for autonomy against corporate interests in mining, timber, energy generation and waste storage. The U.S. Department of the Interior (in which the Bureau of Indian Affairs exists) estimates tribal reservations contain as much as 30 percent of all coal in the western united States, 4.2 billion barrels of oil, 17.5 trillion cubic feet of gas and as much as 37 percent of all uranium. At times, several tribes have found themselves fighting against the same transnational company such as when the Dine, Hopi and Zuni people fought campaigns against Peabody Coal.

Toxic dumps are frequently placed on Indigenous lands, for example, nevada’s Yucca Mountain, which is sacred to several tribes, is now a repository for nuclear waste.

Global warming poses a double-edged threat. Although they bear little responsibility for causing climate change, Indigenous people are already suffering from the effects. For example, Newtok villages in Alaska are sinking under as permafrost melts. Coastal and island communities around the world are flooding and erosion. Record droughts plague tribal lands in the Southwest.

The proposed “solutions” to climate change, such as carbon trading, nuclear power and “clean” coal technologies, will only intensify further mining, air pollution from power plants and toxic dumping on Indigenous lands native American tribes are actively engaged in the global warming dialogue and have organized gatherings to discuss potential climate consequences on their lands and communities, the most recent on the Cocopah Reservation in Arizona December 2006. Moreover, they hope to promote the significant role Indigenous people will play in shaping how Americans address and generate active responses to combat climate change.

“Native Peoples carry not only sharpened skills of observation, specialized environmental knowledge and time-tested ecological wisdom embedded within various aspects of our traditional cultures,” asserts a November 1998 report prepared for The Native Peoples-Native Homelands Climate Change Workshop, “but also the awesome responsibility to speak from the broader base of human experience sadly lacking in those merely concerned with the commodification of this planet…” Coal-fired Navajo generating Station near Page, Arizona, is fueled by eight million tons of coal each year from the nearby Kayenta mine owned by Peabody Western Coal Company. 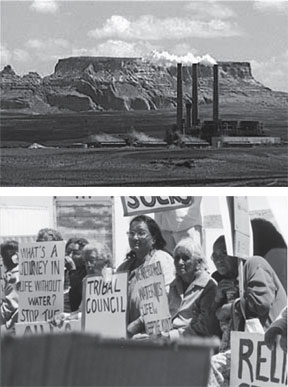 Diné and Hopi people protested the Peabody Coal mine that was using millions of gallons of pristine groundwater to make coal slurry that was piped 273 miles to the Mohave generating Station, until they were both closed in January 2006. Peabody seeks to reopen the mine by seeking a new customer for the coal.

“Dzil Yijiin” (“mountain that is black”) is sacred to the Diné (Navajo) people. Since 1968 on Black mesa, Peabody Western Coal Company has operated the Peabody Coal mine and Kayenta mine, the world’s largest strip mining operation. The coal fuels the Navajo generating Station and, until January 2006, the Mohave generating Station in Nevada, providing electricity to millions of people in large Western cities hundreds of miles away. Peabody is currently applying for to extend their ‘life of mine” permit. PHOTOS: BLACKMESATRUST.ORG
HOW CAPITALISM PLUNDERED A CONTINENT

1492
Christopher Columbus makes contact with Indigenous peoples in the Caribbean, noting “they could easily be commanded and made to work, to sow and to do whatever might be needed, to build towns and be taught to wear clothes and adopt our ways.” Over the next 150 years, Spain, Portugal, England and France establish commercially-driven colonies throughout the Western Hemisphere.

1607
With backing from London investors, Jamestown, Virginia is founded by 105 colonists. Unable to subdue the local indigenous population, the English begin importing African slaves in 1619 to work their tobacco plantations.

1621
One of the first treaties between colonists and Native Americans is signed as the Plymouth Pilgrims enact a peace pact with the Wampanoag Tribe.

1675–76
King Philip’s War erupts in New England between colonists and Native Americans as a result of tensions over colonist’s expansionist activities.

1770s
For the large part, Native Americans fight on the side of the British during Revolutionary War. After the war, they continued to defend their land against “American” colonists.

1790
The Indian Trade and Intercourse Act places almost all interaction between Indians and non-Indians under federal, rather than state control.

1803
The U.S. purchases the Louisiana Territory from France for $15 million, tripling the size of the young country. The Lewis and Clark expedition that follows initiates the exploration of the West.

1808–1813
Tecumseh, chief of the Shawnees, and his brother The Prophet rally warriors from southern and midwestern tribes to resist further white expansion with the goal of creating pan-indigenous confederation from the Great Lakes to the Gulf of Mexico. After several years of fighting, their uprising is defeated.

1813-1814
The Creek Indians are forced by Gen. Andrew Jackson to cede 23 million acres of land, opening the southeastern U.S. to slave-owning cotton growers.

1823
In Johnson v. McIntosh, the Supreme Court rules that the U.S. government holds title to all Native American lands based upon the “doctrine of discovery.”

1830-1840
The 1830 Indian Removal Act leads to the forced transfer of tens of thousands of Native Americans to lands west of the Mississippi River. By 1840, 420 million acres of land, or 22 percent of the continental area had been secured from Native American tribes for an average of 7.4 cents an acre.

1862
Congress passes the Homestead Act opening western territories to land-hungry settlers.
1867
Treaty of Medicine Lodge — Forces free-roaming Plains tribes to live on small reservations where they can be supervised and ‘civilized’. “I love to roam over the prairies. There I feel free and happy, but when I settle down I grow pale and die,” said one Kiowa chief. “This building of homes for us is all nonsense.”

1872
The Mining Act of 1872 is passed by the U.S. Congress. Native Americans, who were not citizens until 1924, were ineligible to make land claims.

1874
Thousands of prospectors invade the Black Hills of western South Dakota following the discovery of gold. Considered sacred by the Lakota Sioux, these lands were guaranteed by an earlier treaty. Several years of fighting break out before another treaty is signed forcing the Lakota to relinquish the land.

1880s
Millions of wild buffalo are slaughtered by white settlers to deprive Plains Indians of the main source of their livelihood. Eliminating the buffalo also opens the Plains to the cattle industry.

1887
The 1887 General Allotment Act created private property by dividing segments of communal tribal lands and distributing them to individuals, with the Federal government selling whatever was left.

1889
The Oklahoma Land Rush begins with an estimated 50,000 settlers race across the land to claim 1.92 million of land previously guaranteed as a permanent refuge for Native Americans forced to move from the east.

1890
Over 250 years of Indian wars end with the Massacre at Wound Knee in which roughly 300 sick and starving Lakota Indians are surrounded and gunned down by the U.S. Army.

1893
Indian Education Act passes making school attendance for Indian children compulsory. The Bureau of Indian Affairs withholds rations and government payments to parents who do not send their children to school.

1973
Several hundred members of AIM engage in a 71-day armed standoff with the federal government at Wounded Knee, South Dakota. Over the next several years, dozens of AIM activists on the Pine Ridge Reservation are killed in a dirty war carried out by the FBI and the official Lakota tribal government.

1980
The U.S. Supreme Court rules that the Lakota Sioux are entitled to $106 million in compensation for the unjust taking of the Black Hills. Some tribal members reject the settlement calling instead for the land to be returned.

2006
Tribal Lands Climate Conference. The first event of its kind, people from 55 indigenous nations meet on the Cocopah Reservation in Somerton, Arizona to share their direct experiences of climate change.