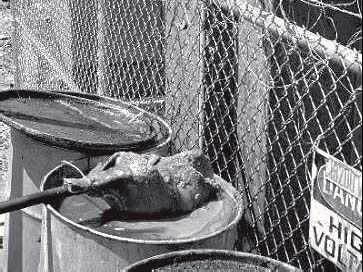 Brent Baker, a Brooklyn activist and ecoentrepreneur is taking on the challenge of using millions of gallons of local waste vegetable oil to make biodiesel, intercepting the material before it arrives in the landfill or clogs up local water lines. His company, Tri-State Biodiesel, plans to open up a biodiesel plant in Red Hook, that will produce approximately 300 million gallons of B20 biofuel (a blend of 20 percent biodiesel and 80 percent diesel). Baker says this would be enough to run all school buses in the five boroughs, with some left over. The New York City Parks Department’s fleet of vehicles runs mostly on B20 and the Department of Sanitation is starting to incorporate the biofuel as well.

The U.S. Environmental Protection Agency estimates that approximately three billion gallons of waste vegetable oil is generated by hotels and restaurants each year in the United States, an amount that could fill tanker trucks bumper-to-bumper from San Francisco to Washington, D.C., and back. New York City alone produces approximately 12 million gallons of waste oil annually.

Baker says his life changed after meeting a pair of women known as “the Veggie Babes,” who were driving across the country in a vehicle powered by used vegetable oil collected from fast food restaurants. This fuel can be used in any modern diesel engine with little or no modification.

“I was sure that [supporting biodiesel] was what I wanted to do from then on,” said Baker.

Twelve years later Baker has taken biodiesel farther then anyone in New York. Since Tri-State Biodiesel was founded in 2004, the company has been collecting used cooking oil from 300 restaurants (free of charge) and processing it into the B20 biofuel blend.

By the end of June, Baker said the company would add an additional 300 venues to his route. “Basically we are able to grow our services as quickly as we can get the trucks.” Once the Red Hook processing plant is opened, however, the B20 blend could then be produced locally.

Within the last year biodiesel has suddenly become a leading “alternative energy” solution in the United States. While Baker plans to make his B20 blend from recycled vegetable oil, the current magic biodiesel solution is to use biofuels produced solely from growing corn, soy, sugar cane and palm oil. Many experts feel this is a devastating proposal.