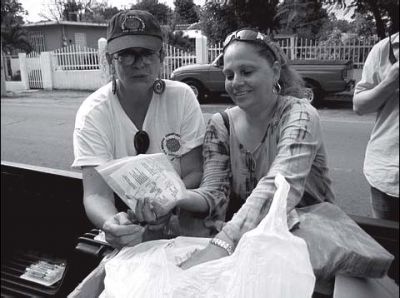 Have you ever traveled 1,600 miles to fill a prescription? That’s what a small number of Puerto Ricans living with HIV have done recently, leaving their island home as refugees of its crumbling AIDS services system, with the help from Latino communities in New York. “We have brought over a few people with donations,” says Lorraine Montenegro, executive director of United Bronx Parents.

In the U.S. territories, federal programs — the same as those sending funds to New York City — are meant to guarantee HIV services, including medicines, lab tests, food, transportation to appointments and housing. But a crisis fuelled by federal under- funding and possible corruption in the Puerto Rico Department of Health and the municipality of San Juan has reached catastrophic proportions.

Possibly worse than going without triple combination therapy, some PLWHAs are getting sporadic supplies, which can easily allow the virus to become resistant to the medicines, rendering them useless. For PLWHAs in the mountains, returning to the pharmacy is no simple task. And Colón says, “The doctor may give you a prescription for 30 days, but the pharmacy gives you a supply for 15 days, 5 days, 2 days. Or you get two of the medicines in your combination, but not the third one.”

A June 5 New York Times article reported similar horror stories, based on interviews with clinic directors who had run out of medicine, a PLWHA who had experienced six treatment interruptions in the past year, and two homeless shelter residents who were both taking a half dose of the prescribed regimen of one man, who shared it with the other.

AIDS activists in Puerto Rico have been mobilized throughout the crisis. From May 14 to mid-June, Colón even stopped taking his own medications in protest — and in solidarity with those who have no choice. Colón, who had a heart attack last year and recently underwent cataract surgery, resumed taking his pills only after developing a painful cyst under each of his armpits.

New Yorkers are mobilizing too. Led by Unidos Dándole Cara al SIDA (United to Give a Face to AIDS), about 40 activists protested at the federal building in Foley Square in lower Manhattan on June 27. Citywide Harm Reduction, which offers syringe exchange to injection drug users to prevent HIV, and Housing Works, an activist AIDS services agency, sent a delegation to Puerto Rico in June to meet with activists and providers.

Activists have asked health officials to designate a third party to manage the disbursement of HIV treatment. The Puerto Rico Health Department is currently considering the private corporation Pharmacy Benefit Management (PBM). But based on its previous record, Colón has doubts that PBM will fulfill its promises — although a system using computers rather than pad and paper would be nice. “This could just be a band-aid to mellow out the pressure we’re putting on them now,” he says.

Activists are also considering a courtbased strategy. What would really give Colón some hope, he says, is “if the authorities would declare a state of emergency. That would be a good start. But for political reasons, they won’t do it.”

In fact, in November 2005, the mayor of San Juan, Jorge Santini, disbanded the AIDS community’s all-volunteer planning council, which was about to request an investigation into possible misuse of funds. “The mayor decided, ‘These people are questioning too much, so I’m going to dissolve it and create a rubber stamp,’” Colón says.

Panama Alba, a former Young Lords Party member on the board of Citywide Harm Reduction, observes, “Most people look at the situation and say, ‘This is not supposed to be happening in the United States.’ But Puerto Rico is a Latin American nation, a third world nation. In a colony, the infrastructures we are used to are non-existent. Drug and alcohol abuse are a part of the colonial reality. You have a population at much higher risk for HIV, and a government that’s not interested in recognizing that there is an HIV epidemic, much less addressing it.”

Meanwhile, more people living with HIV leave Puerto Rico as refugees from this catastrophe. Colón says, “Not only as an HIV positive person but as a human being, I have to ask, how much discrimination is involved? How much Katrina do we have here?”

To get involved in the New York City campaign (you don’t need to be a Spanish speaker) or to offer your talent for an upcoming fundraiser, visit unidosdandolecaraalsida.homestead.com.