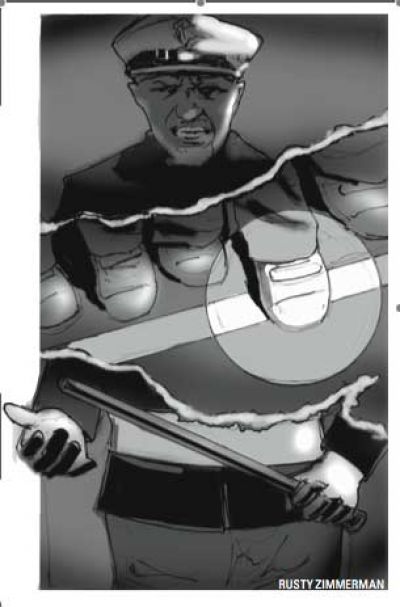 The guard punches a man in the gut and grabs his neck. “It’s your night tonight, maggot.” Gasping, the prisoner stands again. He was supposed to stop at each white line painted on the floor and ask permission to cross, but this time the inmate accidentally stepped on it.

The guard lets him go. Cowering, the prisoner re-enters the movement of men marching like a centipede on the small stage. They are actors, this is not real, but still I feel the audience holding its breath. Written by a veteran who was incarcerated by the Marines, The Brig induces this claustrophobia. No dialogue gives us room to imagine. No characters exist to sympathize with in this depiction of life in a Marine Corps brig. Instead of being drawn into the play, we are trapped inside it.

The Brig is one of Off Broadway’s great experiments. The play was first produced by The Living Theatre in 1963. The company was shut down the same year by the government over non-payment of federal taxes. It now resurfaces in the Living Theatre’s underground space on the Lower East Side.

The backdrop is now the “War on Terror,” and again, the play’s reflection of the world outside keeps us from escaping the essential question, “Where am I obedient?”

Actor Albert Lamont, who plays a prisoner, says, “The point is to show how they don’t just pay attention to the rules but cut off expression. The audience feels this suppression of expression and it forces them to think.” He is right.

In the dark of the theater, the fourth wall that usually separates the audience from the play instead surrounds them both. And this is the point: to force us into antsy squeamishness. The narrative pleasures of theater are not offered. Language is ground down to barks and whimpers. The body marches and stomps, cleans and marches again, giving little to the audience except maddening routine motion.

There are no names, only numbers, and each one has an archetypal role. Number 3 is the “lifer,” his every gesture greased by obedience to run smoothly in the machine. Number 5 is the symbol of hope, a man who served his time and is being released. Number 6 almost makes it, but breaks down, screaming his name, “James Turner” as he is carried away on a stretcher.

Inside these archetypes are real men, actors who must embody the harsh discipline before dramatizing it. “Imagine a room of alpha males colliding. Each guy has a rack, uniform and no idea where the others are coming from,” says actor Brad Burgess, who plays a prisoner. “In the production process, we learned to earn rank through submission; machismo comes from being the most obedient lap-dog.”

Every night, the actors follow the logic of the play. Men walk, stop, wait and turn at the edge of lines seen and unseen. If you slip you lose rank and get punished, on stage. “No matter who you are in The Brig,” Lamont says, “if you miss a line or stumble you get punched.” It’s a brutal ad-libbing that keeps the play electric, choreographed but always raw.

In fact, the creative sadism of the guards is the only break in the monotonous routine. It offers a real relief to the audience but relief tainted by panic and guilt. Actor Gene Ardor, who plays a guard, says, “At first I was too soft, had to get hard but not angry, not out of control.” Then he learned to “enjoy his job.” His character calls the prisoners children, which gave Ardor the clue he needed. “The guard I play thinks he’s helping the prisoners. It’s why he doesn’t get angry and lose control. These guards play a game, an absurd sadistic game.”