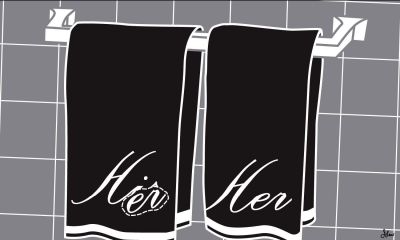 Helen Boyd’s fascinating memoir-cum-social analysis, She’s Not the Man I Married, turns a personal dilemma into fodder to discuss what we mean — or don’t mean — when we pin gender labels on each other.

For starters, there are those pesky terms, “male” and “female.” By way of introduction, Boyd informs readers that the book is the story “of how a tomboy fell in love with a sissy, how a butch found her femme, how a boyish girl met a girlish boy. Who is who is not always clear and doesn’t always matter. In some ways, that’s the heart of this book: the idea that a relationship is a place where people can and do and maybe even ought to become as ungendered as they can.”

Sounds great in theory. But again, there’s that pesky thing: reality. Here, we smack head-on into the blues and pinks of childrearing and the homophobia that undergirds the sexuality we develop.

Boyd wasn’t raised in a bubble, and understands the obstacles that make complete “ungendering” a utopian fantasy. Like all of us, she carries ideological baggage and is unabashedly honest about her heterosexual preference. Nonetheless, when her husband, “Betty,” whose male name is never revealed, announced his interest in crossdressing, Boyd was nonplussed. In fact, she found it something of a turn-on and enjoyed helping him primp, apply make-up and shop for female attire. But shortly thereafter, when Betty opted to move from the boudoir to the streets, spending more and more time as a woman, things got increasingly thorny. To wit, Boyd had to confront both public perceptions and her own deep-seated ideas about sexuality, propriety and physical appearance.

Casual observers watching the pair toddle down the street, for example, saw them as an attractive lesbian couple. Was that okay? Did it matter? What’s more, Boyd has had to ask herself if she will stay with Betty if he opts to surgically alter his body. Will she still desire him if he physically becomes she?

It’s not your standard boy-girl stuff and Boyd admits that she vacillates about the answer. On some days, Betty is the love of her life, regardless of which genitals she possesses; at other times she is far less certain. Luckily for both, it is a non-issue since Betty is currently not pursuing medical intervention.

Still, presumptions about femininity and masculinity are always front-and-center in Betty and Helen’s dyad. Take shoes: Boyd is shocked to see Betty swoon over lacy pumps or six-inch heels since she has always opted for flats or Doc Martens. Princess and bride fantasies, as well as frilly girl duds, similarly revolt her, but not Betty.

In the end, Boyd writes that despite the obvious discordance, the central issue is whether society can allow — or can be pushed to at least acknowledge — that men and women exist on a continuum that includes butches, superfemmes and everyone in between.

Pretending otherwise, Boyd writes, is damaging and limits our exploration of who we might become. It also limits with whom we associate, a point driven home by Helen and Betty’s dramatic love story. Make no mistake, even in its manifold difficult moments, theirs is the kind of love that people fantasize about.

She’s Not the Man I Married is by turns funny, heart-breaking, illuminating, expansive and humane. While it asks more questions than it answers, this is ultimately its strength. Provocative and smart, it leaves readers rooting for the winsome, witty and stylish pair.

“I have a husband and a girlfriend on the side,” Boyd quips, “but they both happen to be the same person.” Her smile is evident beneath the words.

Only a fool would call Helen and Betty’s relationship easy, but the two seem content to take it one day at a time. Their commitment is to a life based on shared interests, passion and respect. Who could ask for more?

Boyd scrutinizes the reciprocal love between a straight woman and a trans person and candidly describes the problems they’ve encountered. Although I wish that the book had included more information on how, or if, their respective families have dealt with Betty’s female persona, this is a small gap in an otherwise incisive and thoughtful narrative.