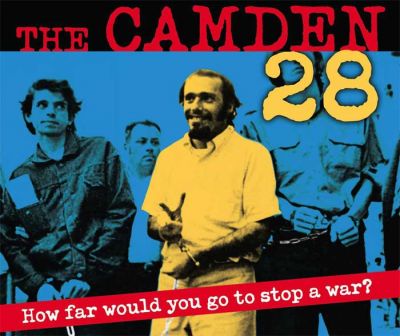 The country mired in an endless war, rising dissent, creative direct action — Camden 28 director Anthony Giacchino, much like the directors of the 2002 film The Weather Underground, obviously hopes to strike a chord in sympathetic viewers of a new antiwar era by reminding us of the tactics of an earlier generation of activists. Unfortunately, the upshot of his conventional but moving documentary is to demonstrate the vast gulf that separates the Vietnam Era from our own.

Camden 28 tells the story of a group of 28 men and women, all but one of them members of the Catholic clergy or Catholic laypeople, who staged a 1971 raid on a Camden, N.J. draft board office to protest the Vietnam War and its impact on inner-city America. Unlike earlier draft board actions led by rising clerical stars like the Berrigan brothers, the Camden action was designed to be more than just a “symbolic” protest. And unlike earlier raids, this one was clearly a sting; more than 40 FBI agents quickly arrested the protesters as they entered the draft board offices in the dead of night. The film recounts the planning and execution of the raid, documents the 28’s dramatic trial, and grants the protesters space to reflect on the meaning of their actions today.

Giacchino has gathered together a number of protagonists from both sides of the Camden Draft Board action, including FBI agents assigned to the case. The most powerful voices, of course, are those of the Camden 28 themselves. Their youthful exuberance gone and their hair gone grey, few of them seemed to have abandoned their idealism of 1971, a fact that stands in sharp contrast to the usual Big Chill clichés of “baby boomer sellouts.”

Despite the gripping on-screen political drama that plays out over a period of months and years, the true dramatic center of the film revolves around the infiltrator who ultimately betrayed his comrades to the FBI. Although it would ruin much of the film’s suspense to reveal more, Giacchino lifts the plot out of the realm of conventional morality tale through his complex portrayal of the man many of his former friends called the “Judas” of the group.

With many of the standard histories of “the sixties” trailing off in 1969 as the Weathermen rampage across Chicago, it is difficult to remember just how simultaneously radical and disillusioned mainstream America had become by 1971. It is this complex social reality that the film best illuminates. One of the legal arguments the protesters mounted during their trial was the contention that although the group technically broke the law, breaking the law in opposition to an unjust war could and should not be punishable in court. The news accounts quoted in the film seem (though hardly sympathetic) qualitatively different than the antiwar coverage of today. A second defense pursued by the 28 — that their illegal actions were only made possible through the urging and assistance of the FBI infiltrator himself— resembles the defense being pursued in the trial of the “Fort Dix Six” — ironically, also taking place in South Jersey near Camden. It is hard to imagine this line of defense getting much traction today.

Ultimately, the America of 1971 — an America which experienced twenty years of civil rights protest, “teenage rebellion” and a war against both poverty and communism — seems far away from the fat, happy, somnambulant America of 2007. Traditional leftist wisdom holds that it was the activism of the 1960s and early 70s that molded a decade and ended a war. Camden 28 shows, however, that it might have been precisely the reverse: that the complex sociological reality of the 1960s and 70s shaped activism in ways that are difficult, if not impossible, to recover today.