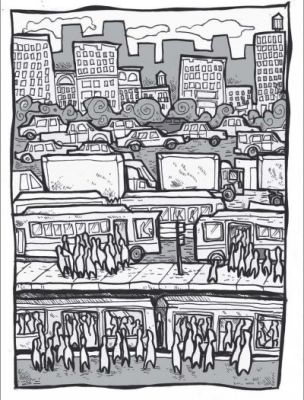 The battle over congestion pricing has just begun.

On July 19, the mayor and New York State Assembly agreed to establish a 17-member commission that can recommend various remedies to ease Manhattan gridlock but which is not required to approve congestion pricing. As part of the deal Mayor Bloomberg will appoint a majority of the commission.

He will probably stack the commission with flunkies who will push his scheme. Since the New York City Council — which has been in the forefront of opposition to congestion pricing — has to OK the commission’s plan, it doesn’t mean his henchmen can run roughshod.

Now, some sort of levy on rush-hour traffic should be implemented, but Bloomberg’s proposal is full of bad ideas.

Foremost, Bloomberg is plotting to incorporate the license-plate readers used to track cars in a smothering security grid known as a “Ring of Steel” to track the daily activities of New Yorkers. Congestion pricing advocates such as Transportation Alternatives have been unconscionably silent about the dual-use nature of these cameras.

The New York Civil Liberties Union notes the “Ring of Steel plan is a major step towards blanket police monitoring of law-abiding New Yorkers, and… will put hundreds of thousands of innocent people into police computers.”

Is this really the only choice — that we trade civil liberties for modest reductions in traffic and pollution?

This has to be forcefully opposed and any final plan must prevent the police from using or storing the data to spy on the public.

This isn’t the only problem with Bloomberg’s plan, however. It’s regressive and lacks guarantees that the overburdened subway system will receive funds.

As part of the congestion pricing proposal, the city is asking for $300 million in federal funds for mass transit, primarily for express buses that cost $10 a roundtrip. Even with the 20 percent MTA discount, anyone commuting on these buses to Manhattan daily will have to spend more than $2,000 a year. This amounts to more than 10 percent of the take-home pay for the tens of thousands of New Yorkers who make under $25,000 a year as cooks, messengers, clerks and retail workers in lower Manhattan.

The congestion pricing plan is similarly regressive. Bloomberg wants to impose a flat tax of $8 on cars that brooks no distinction between a $100,000 SUV and a $12,000 subcompact.

New York should implement a fairer system, such as a “variable congestion charge” based on tailpipe emissions, which London is considering. This would make explicit the relation between the rich and the social costs of their pollution-spewing luxury vehicles.

The one positive aspect is an estimated $400 million a year for mass transit. But Bloomberg’s PlaNYC 2030 focuses on suburban rail lines: Metro North, New Jersey Transit and the Long Island Railroad. His plan does include the new Second Avenue subway line, but this was in the works long before his congestion plan.

Furthermore, PlaNYC 2030 doesn’t even call for any further subway construction to begin until 2022.

The city wails about the lack of money for the new line, but it can easily cover the Phase I shortfall of $974 million. New York City racked up an enormous $4.4 billion budget surplus this fiscal year.

Instead, Bloomberg pampered the wealthy by rebating $1.3 billion in taxes to property and home owners. Meanwhile, he cynically stoked fears of $3 subway and bus fares if congestion pricing failed.

His harebrained scheme doesn’t address concerns about bordering neighborhoods being turned into parking lots, the impact on small businesses forced to pay $5,000 a year per delivery van, or the lack of an environmental impact study or consideration of other traffic-reduction strategies.

Bloomberg is attempting a power play. Rather than dip into the city’s overflowing coffers to fund subway expansion, he wants to form a new financing body called the SMART Authority to “provide the MTA with a one-time grant to cover its unfunded need to achieve a full state of good repair.”

It’s naïve to believe a politician’s lofty promises. A new authority could simply choose to back new regional highways that serve wealthy commuters and tourists instead of mass transit for lower-income city dwellers.

Bloomberg’s plan will curtail civil liberties and impose fees unequally while doing little to aid the very mass transit that his administration is allowing to languish. This is not a plan New York needs.