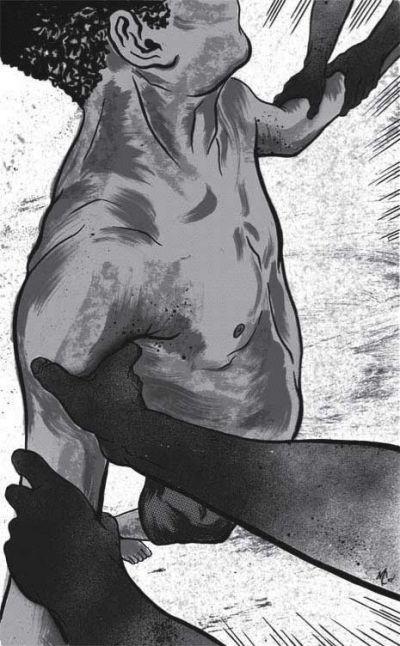 On Sunday June 8, I went to the International African Arts Festival in the Brooklyn Navy Yard. Thousands of Afrocentric black folk, men with long dreadlocks and women with afropuffs walked the maze of tents. They were my neighbors. Even if most of us never set foot in Africa, we all shared it as an ideal.

As I was asking a seller about a dress my cell phone sang. It was Delia, a friend who works at an international aid agency.

I told her of the festival. “You know most African clothes are made in Indonesia or the Netherlands.” I stood hand on hip, “Delia no.” She laughed and said, “I’m serious. Even the DRC where I’m going, Mobutu banned Western clothes so more people dress traditionally but none of the clothes are actually made there. It’s fucked.”

We laughed bitterly. “So what’s real here?” I asked. Looking around, I saw hard-faced Nation of Islam men standing silent as a video of Minister Farrakhan spoke for them. Black Israelites in Lord of the Rings costume sold books proving we are the original Jews. A Nuwabian in a turban held a book to a woman: “It tells the truth about our Egyptian origins.” In stall after stall the fantasy of Africa was sold and black Americans could buy into it.

In the crowd a woman with “Save Darfur” scribbled on her shirt studied people, clipboard in hand. If someone lingered at a stall, she would start: “Hi my name is Herlena Lewis, will you help stop the genocide in Darfur?” She and I talked in the middle of a crowd circling stalls. She told me, “When I heard about the genocide in Darfur I couldn’t ignore the emergency.” We shared known stories of women gang-raped, of boys with guns and men thinned by AIDS. It was an Africa concealed by the romantic images that floated in the Afrocentric mind.

Black Brooklyn was not alone in pretending to be a neighbor to Africa. The following day, June 9, I went to In Darfur a play written by Winter Miller, a research assistant for New York Times writer Nicholas Kristoff. It was at the Public Theater at Central Park West. The audience was earnest and mostly white. Theater workers wearing Save Darfur shirts guided us to our seats. They reminded me of Lewis and her homemade shirt, except these were professionally designed. Here, sympathy had a budget.

On stage, a refugee told of her husband shot by laughing soldiers. On conditions of anonymity, she told a reporter her story but was betrayed when her name appeared in print. In the last scene, the stage darkens as the refugee is shot, the bullets echoing in the open air.

After the play, Nicolas Kristoff, Samantha Power and others gathered on a panel. They recited the grim facts and hopeless history of American indifference. Against the despair an earnest young man told the audience, “You can be Oscar Schindler, you can be a moral giant.” His strategy? We enlist on a website and call our politicians a lot. No direct action was called for. The audience applause thundered but it seemed too loud for such a small act.

I realized he gave the audience what they wanted: the self-righteousness of a witness with the comfort of a shopper. At the end of the panel, actress Mia Farrow held up a melted child’s shoe she found in the ash of a burned village. “This shows how real it is,” she said, “If you want to touch it come see me afterwards.”

As I left, I met Reverend Podres Spencer of Concord Baptist Church in Bed-Stuy. He, along with Rep. Charles Rangel (D-NY) and Rev. Herbert Daughtry of House of Our Lord Church were arrested for chaining themselves to the Sudanese Embassy in Washington D.C. On the way home to Brooklyn, I asked him why there were so few black people at the official Save Darfur rallies.

“If you cut our community,” he says, “half are Christian and half are Muslims who believe Jews use the Save Darfur campaign to smear Islam.” His hands wheeled in the air. “Whatever your suspicions are, keep them in the closet because people are dying. I hear brothers say, ‘Why should we do anything for them? They don’t help us.” His voice shot out. “I say, it’s not about if they love you but can you love them.”

On Nostrand, long-robed Muslim Africans share the sidewalk with bearded Rastafari, and sisters in tights swagger past women in long black hajibs. We share the street but we are not neighbors because we don’t share a vision. It was a fact made obvious after seeing Afrocentric blacks at the festival and liberal whites at the stage reading of In Darfur, both posing as good neighbors to the estranged African. Yet they did not even share the same idea of Africa. Is it that we can only love a neighbor who is too far away to be anything but a reflection of our own goodwill?