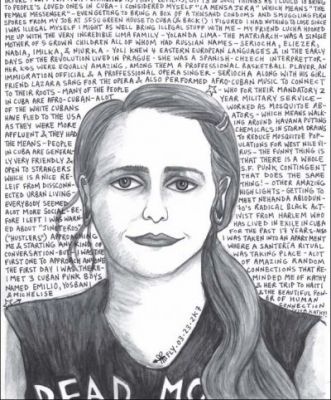 Fly’s distinctive style and message came to my attention some years ago on leaflet at ABC No Rio. She’s been a consistent presence in New York City radical circles, a member of the World War 3 Illustrated collective (founded by Seth Tobocman and Peter Kuper) and an adamant supporter and teacher of DIY zines and comics. From the cover of the first issue of $pread, a sex workers’ magazine, to her zine (and now book) PEOPs, a chronicle of the lives of downtown Manhattanites, Fly tackles both the controversial and the commonplace. I sat down with her on June 24 at the MoCCA ArtFest to ask a few questions.

FR: What do you make of the transformation of the Lower East Side?

FLY: The LES has been transforming for so long, it’s sort of the nature of the place. People have been fighting [the latest wave of gentrification] since way before I arrived here in the late 80s. There was of course the real estate boom of the 80s that sort of went bust – when I got here it was still pretty rundown and crazy. I have to say that I do not miss the drug dealers or the people shooting up on the street – but I do miss all the insanely talented artists and performers that used to populate the area. It is very unfair that so many people who were born in the Lower East Side now cannot afford to live here. It used to feel a bit like a small town around here but with all the options of a big city – now if I am out in the evening I am horrified walking along the sidewalks – even on Avenue C! – to see the multitudes of loud drunken idiots making so much noise and making a big mess. The Lower East Side used to be a neighborhood and it had real character (and you can still find that here but it is seriously threatened by the dorm mentality of some idiot developers and the fancy restaurants and hair salons that no one living here can afford to go to). In the long run the real neighborhood gets displaced because people can’t afford to live here and they are slowly being replaced by a very transient population – NYU students and other high priced renters who are not interested in working on a connection to the real soul and history of the place – oh, I could rant for hours about this.

FR: Where in New York do you look for the kind of iconoclastic rebels who used to populate the L.E.S.?

FLY: Well – I don’t really go out on a search for ‘iconoclastic rebels’ – basically I do my work and I just seem to get connected to amazing people. There are still some great places in the LES for art and culture like ABC No Rio, Bluestockings Books on Allen St, Bowery Poetry Club, St. Marks Bookshop, Sixth Street Community Center, The Lower East Side Girls Club, the Times Up Space on Houston close to Lafayette, the MoCCA – and life is so virtual these days – there are a lot of amazing groups that don’t have offices or stable spaces to meet but have websites, like the Icarus Project and the Misled Youth Network and freethe.net and punkmagazine.com and then there are the Killer Banshees of Oakland CA. Also Microcosm Publishing!

FR: If you weren’t doing comics or cartooning, what would you be doing?

FLY: Well I’m actually already doing most of them, which is a lot of finishing work on my apartment (a Lower East Side Home(in)Stead) and teaching the DIY Comix and Zine-Making class at MoCCA. I used to skate a lot around the city until I broke my back skating in 1997. (Laughing) I actually managed to bounce back from that but I’ve had several mishaps since then.

I used to do a lot of extreme sports – like running marathons, snow skiing, water skiing and I jumped out of a plane once and I got a bronze medal at the world rowing championships in 1984. But to surf again would really be fun. If I didn’t have to spend the time doing comics…skating and surfing.

FR: What is the biggest surprise you’ve had in comics?

FLY: Yeah. I was kind of surprised at the potential of comics – because I grew up more with mainstream comics. When I was very young it was Casper (the Friendly Ghost) and Archie and all that stuff. And then it was the X-Men and Daredevil and then it was only later when I was out of high school that I realized that comics could be an art form.

I was really into the punk scene as a very young teenager but I didn’t fully realize about the potential of comics being political until seeing Raw Magazine. The one artist that really struck me was Sue Coe and she was definitely political. She really affected me and my whole outlook. When I saw her work I realized that you can do fine artwork and it can be comics and it can have a really intense message that actually means something and is giving education to people in a positive way. Oh – I also totally loved Gary Panter’s comics! – Jimbo! – so hilarious!

FR: What would be your dream collaboration, living or dead?

FLY: Hmmm….lately I have been collaborating more!… But I’m such a control freak. I think my dream collaboration would probably be not with another visual artist but with a writer. I know: Kathy Acker. She died a while ago but I would love to have been able to work with her on a comic. I first read her in the 80s when my life was really chaotic and transient – I felt like the way she wrote was like the way I was thinking. Her writing to me was just really authentic – she wasn’t afraid to just put everything out there – I could feel it in my bones. Whenever I read any of her stuff I would get so inspired that I would end up doing a lot of writing and drawing myself and I would also have the craziest dreams – I used to do a lot of comics based on dreams too.

FR: What art supplies do you use to make comics? Supplies and techniques… talk us from the beginning of the cartoon to the end.

FLY: It’s gotten a lot more complicated for me. When I first started doing comics I would draw stuff in my sketchbook and use a pen to ink it – and I always hated how the line was a bit fuzzy. But I was very influenced by hanging out with this amazing Canadian artist named Fiona Smyth (she had a comic in the eighties called Nocturnal Emissions, published by Drawn and Quarterly) who was using a brush to ink her comics. So I tried a brush and really loved it because you get a really fluid stroke and it’s a clean line! Without the fuzzies! It’s more painterly than using a pen. [With a pen] you’re more restricted in your movement. Then I started doing my final artwork on Bristol board (smooth press Bristol – acid free). It was looking a lot better on the actual board than on paper, and it’s a lot more durable that way.

When I started doing work with the World War 3 [Illustrated] people, I saw them bringing in their stuff to be printed and it was always on really nice paper. (laughing) At the time I was this crusty squatter and didn’t really have nice materials so I was doing everything in these gnarly old sketchbooks. I looked at their stuff and I just thought “wow. I gotta get more professional or something.” – I specifically remember that Eric Drooker’s originals looked really good!

FR: These are real artists.

FLY: Yeah, they’re real artists and I’m this crusty person and they’re not going to respect me. I also felt like it would give a longer life to my artwork. On paper it disintegrates faster – the ink fades. I guess getting more respect for your work is something that pushes people to get better material. Now the way that I do my comics is I’ll do really rough sketches on paper and then I’ll do better sketches on paper as I am working out the page design and then I will transfer the final pencils using a light-box or using my window. I’ll transfer that onto Bristol board which is very smooth and then I’ll use a brush and ink to do my final piece. Then I’ll usually scan that and then I’ll tweak it in Photoshop. Maybe add some grayscale or color and fix up all the rough edges. I love Photoshop. I have a Wacom tablet, which you plug into your computer and there is a special pen that goes with it. It’s like drawing but it’s on a little tablet and I love this thing. I’ve had it for over ten years.

FLY: Yeah. And to me it’s so essential. I used to have these little spasms when inking because I was like “oh man, I’m gonna fuck it up!” And now I’m faster and more confident just because I know it can be fixed so I actually make less mistakes now than when I was trying to be careful. (laughing)

FR: Where can folks find your comics and cartoons?

FLY: Well, I do a monthly thing in MAXIMUMROCKNROLL. There’s a quarterly zine called Slug and Lettuce, I do comics in that. And I do stuff for the Villager, which is a Lower East Side publication that comes out weekly. If you are in New York City you can find my stuff at BlueStockings Books (Allen St. at Stanton) and St. Marks Bookshop (31 3rd Ave at E 9th St) and Jim Hanley’s Universe (33rd St near 5th Ave) I just put out a new issue of Dog Dayz which is my illustrated novel in the works about these crazy squatter punk kids in the Lower East Side 1993 and all their shenanigans and travels. I am about to put out a new PEOPs zine and maybe a new PEOPs book – I also have a PEOPs Show DVD out and I will be working on a new one soon! People write to me from all over the world just because MAXIMUMROCKNROLL and Slug and Lettuce go all over the world and I’m always writing “email me,” “send for comics.” (laughing) So wherever you are, send me an email! fly@bway.net or check out my site: www.bway.net/~fly

FR: Thank you so much, Fly.