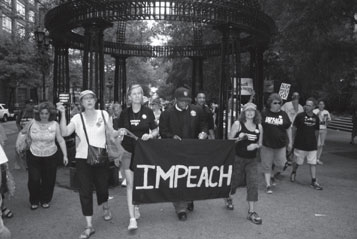 SHE’S BACK : Peace Mom Cindy Sheehan (center) leads a July 26 march through Midtown calling for the impeachment of President Bush and Vice-President Cheney.

Several days later she left for refugee camps in Syria and Jordan bringing relief supplies to Iraqi victims of the war. Sheehan, who ended her brief “retirement” from the antiwar movement at the beginning of July, announced July 23 that she would run as an independent candidate for Congress next year against Speaker of the House Nancy Pelosi (D-Calif.) due to Pelosi’s refusal to support bringing articles of impeachment against Bush and Cheney. PHOTO: K. CYR
Aug. 25 — Newark: More than 120 New
Jersey antiwar groups are expected to participate
in The People’s March for Peace, Equality,
Jobs and Justice.
(peaceandjusticecoaliton.org)
Sept. 21 — Iraq Moratorium: Decentralized
grassroots antiwar actions — rallies, vigils,
pickets, cultural events, civil disobedience,
etc. — to take place in towns and cities across
the country on the third Friday of each month
starting Sept. 21.
(iraqqmoratorium.org)
Sept. 29 — National March on Washington
organized by the Troops Out Now Coalition.
(troopsoutnow.org)
Oct. 21-23—
No War, No Warming!
Local and national actions to highlight the
connections between the war in Iraq and the
global warming crisis. (unitedforpeace.org)